This is what Sonny tells Will as they craft and perfect their personalized holiday tale at the start of Days of Our Lives: A Very Salem Christmas, Peacock’s festive standalone flick that began streaming Thursday. To celebrate the most magical time of the year, the special creates an alternate reality for Salem’s good and bad guys for a script Will is penning with Sonny’s help.

For instance, Sami and Marlena own Brady’s Pub, because in this multiverse version of Days, Roman is deceased. Sami is also super sweet and intuitive and can’t help but feel close to Sydney, who, as she suspected all along, is actually her daughter. She learns the truth, gets to slap Nicole over and over until she confesses, and then snatches EJ and Sydney from the villainous deceiver.

Nicole wasn’t completely left in the cold, and when she sat down to bemoan her horrible mistakes, a bum took pity on her and handed her a tissue to wipe away her tears. But this wasn’t just any bum. It was actually Eric, and when he showed Nicole who he really was, she smiled. 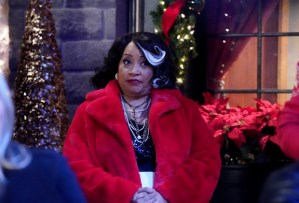 In another twist, Kristen was married to John, but they opted for a divorce when Kristen chose his son Brady instead. Worse still, John caught them getting frisky in the snow. However, John wasn’t too brokenhearted because he got to be with Marlena. Speaking of Kristen, she was as duplicitous as ever — and not just in her marriage.

She secretly worked with a Scrooge-y Paulina, who tried to evict Sami, Marlena, John and all the other small business owners in order to build a big-box store. Thankfully, Paulina got outsmarted by a nicer-than-expected Leo, who found a legal loophole that helped the residents of Salem save their businesses and experience their own Christmas miracle.

Paulina’s interactions with Leo proved especially humorous, and in one of several meta moments, Paulina kept calling Leo “Mary,” much the way Jackée Harry did as Sandra Clark on the classic sitcom 227. There were also a few fun nods to other beloved Christmas movies, including Brady’s flashcard homage to Love Actually, and Will, Sonny and Chad got dressed in drag again a la September’s breakout miniseries Beyond Salem. 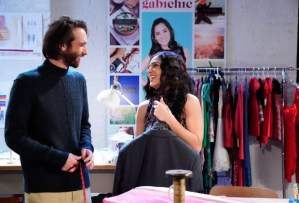 All of the merry moments weren’t as warm and fuzzy as they should’ve been. The boyfriend swap between Chanel and Allie was especially awkward because in the end, they seemed to actually want to be with each other. Meanwhile, Gabi and Nick were best friends who became much more. And this is sweet, unless you remember that on the original Days, Gabi had to kill Nick when he became a creepy stalker.

In the end, Days of Our Lives: A Very Salem Christmas is more kitsch than cringe and has all the mirth and holiday stock footage it needs to get fans in the holiday spirit.

What did you think of A Very Salem Christmas? And would you watch it again? Grade the holiday offering in our poll, and drop your thoughts in the comments.