This week’s Hawkeye featured some unlikely bonding over mac and cheese, and teased the arrival of yet another familiar face. 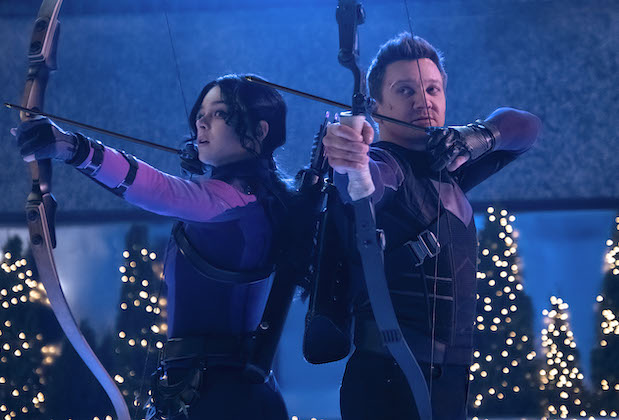 Episode 5 of the Disney+ series kicked off with a flashback to 2018, in which Yelena attempted to help a Black Widow who didn’t need to be saved. She also looked forward to reconnecting with her sister Natasha, until she found herself Blipped while rinsing her hands.

Though five years then passed for the rest of the world, it was only five seconds for Yelena, and she returned in the same spot utterly confused and wanting to let Natasha know that she was OK. Well, we all know how that went…

Back in the present day and following that rooftop battle which ended with Clint sending her home, Kate returned to her mom’s penthouse apartment bruised and defeated. Eleanor tended to Kate’s wounds while Kate beat herself up for not living up to this superhero image she had in her head. She also confessed that she and Clint uncovered evidence incriminating Jack and his company Sloan LTD, and asked Eleanor to look into it.

Maya, meanwhile, realized that that something bigger was at play with Yelena now in the mix. Kazi urged her to stop her hunt for Ronin, but there was no way she was backing down after coming so close. Kazi agreed to help her kill him, but after that, they would be done.

Over at Kate’s charred apartment, the hero-in-training arrived to find Yelena already waiting for her with a “tasty” pot of mac and cheese. It was time for some girl talk, which included Yelena criticizing Kate for having only one fork, drowning her macaroni dish in hot sauce, and cackling at Kate thinking she can kill her. (Side note: Who do we talk to about getting the extended cut of this scene?) 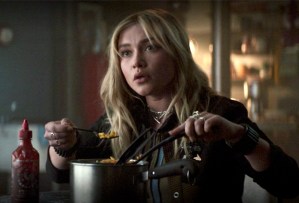 The conversation then turned to Clint, who Yelena blamed for Natasha’s death. Firm in her belief that Clint would never let that happen, Kate insisted that Clint isn’t perfect but still a good person. But to Yelena, nice words are meaningless because people are defined by their actions. Realizing that Kate didn’t know where Clint was, Yelena thanked her for the girls’ night and warned the young archer not to get in her way again.

Clint found a hiding spot with Grills, the firefighter and LARPer he befriended back in Episode 2. Plus, Missy dropped off the new suits she made for Clint and Kate, not that he was at all interested. He had more important things to do, like bear his soul to Natasha in front of an Avengers memorial plaque. Still remorseful over her death, he vowed to earn the second chance she gave him — and apologized for what he’s about to do.

Eleanor did follow up on Kate’s tip about Jack, and had him taken into custody after uncovering his shady dealings. Jack remained calm while denying any involvement with Sloan LTD and insisting that he had been framed.

Clint, on his way to do the thing he needed to apologize for, called his wife Laura to fill her in on their very big problem, which includes Maya (who has the watch from the Avengers compound) and a Black Widow hired to kill him. He vowed to end this tonight before the “big guy” gets involved, and Laura urged him to do what he needs to do.

Suiting up as Ronin, Clint called a meeting with Maya at the location where they first met aka the site of her father’s murder. After taking down her Tracksuit entourage (including Kazi) one by one, his long-awaited battle with Maya ensued. Yet when Clint had the opportunity to kill her, he chose to show her his face instead, and issued a warning to stay away from him and his family. The ex-Avenger also revealed that Maya’s boss is the one who wanted her father dead. Maya refused to believe that and picked up the Ronin sword to kill him… before Kate arrived just in time to shoot the weapon out of her hand.

Maya fled to meet up with Kazi, who apologized for getting knocked out by Clint. Kazi seemed suspiciously upset that Ronin was still alive, and Maya asked why he didn’t attend the Tracksuit meeting the night her father was killed, since he was William’s second in command. Kazi claimed he wasn’t called for that meeting, but does Maya really believe that?

Kate and Clint left the scene in a rideshare (really, girl?), and during the ride Kate broke the news that she spoke with Natasha’s sister. But Clint already knew who Yelena was, even calling her by her name. Speaking of, the Black Widow assassin followed Kate’s mom to her Park Avenue apartment.

As our heroes wound down at Grills’ apartment, Kate received a text that changed the vibe. Her mother is the one who hired Black Widow to take out Clint. A stunned Kate showed Clint the photo she also received: Eleanor with Wilson Fisk aka Kingpin (again played by Marvel’s Daredevil‘s Vincent D’Onofrio). And yes, he the same “big guy” Clint has been worried about all along.

What did you all think of this week’s episode of Hawkeye? Are you ready for Kingpin’s arrival? And what else do you expect from next week’s finale?