Following in the footsteps of multihyphenates like Will Smith and 50 Cent, rapper Big Sean is jumping into the acting game with laser focus.

He currently appears in Season 2 of the Lena Waithe comedy Twenties, which airs its season finale this Wednesday at 10/9c on BET.

Sean plays Tristan, an anti-social media guy who changes his tune after realizing there’s value in being connected online. Although the rapper has appeared in various TV and film projects before (including the 2019 animated film Trouble), the role marks his first time playing a live-action fictional character.

“It’s a different experience, for sure,” Big Sean tells TVLine of his time on set. “A lot of doing it over and over again and hoping that they use the right take. There’s a lot of things you’re thinking about like, ‘Dang, I really like how I did it this way, and they might not use it because it [doesn’t] fit the director’s vision.’ It’s a different game than music, but a lot of similarities, since you have to focus and apply yourself, and the product turns out the way it does.”

Sean, who is good friends with Waithe, says the Twenties creator approached him about playing Tristan over dinner because she felt he fit the character well and could bring it to life on screen. With his first major TV acting gig officially in the books, the entertainer has his eyes set on more on-screen roles, as well as potentially working with fellow rapper-turned-actor 50 Cent. 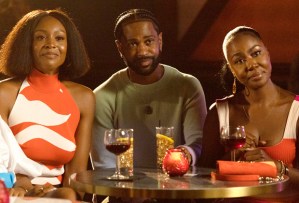 “I was actually supposed to do something with 50 [Cent], but it didn’t line up schedule-wise,” he shares. “But those are great people. [BMF] is one of my favorites right now. I love the Power universe — Raising Kanan and all of that. It’s fire.”

Moved by the recent deaths of important figures like Nipsey Hussle, Chadwick Boseman and Virgil Abloh, Sean realizes his time is limited and, as a result, is determined to push himself creatively.

In 2018, he founded the production company Great Lakes Pictures with childhood best friend and director/producer Lawrence Lamont and produced the documentary Detroit: Comeback City about the economic downfall and potential rebirth of his hometown. Sean hopes to take his producing to the next level and “putting the right people in positions of producing or directing.”