A new Survivor champ is about to be crowned, only this time, it won’t be announced live.

Airing Wednesday at 8/7c on CBS, the two-hour finale of Survivor 41 will bring the latest battle for a million dollars to a close, as Deshawn Radden, Heather Aldret, Erika Casupanan, Xander Hastings and Ricard Foyé inch closer and closer to securing the title of Sole Survivor.

This year, finale night’s kicking it old school, and for the first time since Season 1, the final votes will be read on location immediately after they’re placed. Plus, following the winner announcement will be a one-hour aftershow (also filmed on location), where players will break down the season while “still in the mindset of the game.”

Ahead of all the fun, Jeff Probst answered some of our burning questions about the season and its remaining players, and detailed what viewers can expect heading into the big finish.

TVLINE | Can you walk us through the decision to read the final votes on location, and did the lack of a live reveal and audience detract, in any way, from the overall energy?
JEFF PROBST | It’s a good question and one we debated as well. What are the pros and cons of reading the votes on location with just the players and the jury vs. a big finale with a live audience? Here’s what we learned: there are pros and cons to both!

I definitely miss the big energy of the live audience and seeing all the family members of our players. That kind of excitement is very unique because it’s more of an event. But what was really cool about revealing the winner in the jungle was the intimacy. There was no music, no fans screaming. The final three were still in their game clothes, in game mode, still starving, still exhausted.

It also felt special because it was just us. So once the winner was revealed, they all shared this great secret. Survivor 41 was their season and only they knew the answer. That’s pretty cool.

Then we went right into something we’re calling the Survivor After Show where we had a really raw and candid conversation about the entire season. And what was great about doing it immediately following the vote was the players were still in the mindset of the game. They had not been influenced by social media and the reactions of fans. They weren’t defending their actions, they were owning them. The only big con to doing it in the jungle is the non-jury cannot be a part of it. That was a big bummer for them and for us, because every player contributed so much this season and we wanted them to be with us, but we just couldn’t find a way to solve it.

TVLINE | Out of the five remaining players, who are you most and least surprised to see still in the game?
None of the final five surprise me, and here’s why: Before I vote to put someone on the show, I have to imagine them winning. If I can’t imagine a scenario in which they could win, I’m probably not going to vote for them to be on the show. That is not the same criteria used by other people who have a say in who goes on the show, just mine. And I’ve seen potential winners blow it in the last few days by making just one mistake and in doing so they open the door for someone else.

TVLINE | What, in your opinion, has been the defining moment from 41 that you think should end up in the Survivor record books?
That’s a tough question to answer because it’s so subjective, but I’ll give it a go. My vote would go for Ricard turning on Shan as the defining moment of the season. As a pair, you have to put them up there with JT and Stephen, Domenick and Wendell or Denise and Malcolm. But their relationship was really unique because of the way they fought like brother and sister. It kind of blew my mind how fast they became like family and how openly they talked about eventually taking each other out. It was fascinating. 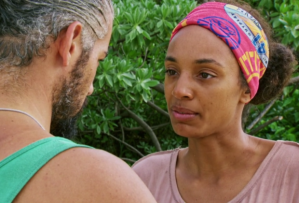 And both were great players who shared equally in the decision making and then fought for credit. You could see their showdown coming, yet you didn’t really want it to happen because they were so fun to watch. The way it went down was so unexpected and yet so inevitable… a brutal betrayal. Shan knew that Deshawn and Danny were targeting Ricard, but instead of joining them, she stayed loyal to Ricard and told him. And what did Ricard do? He saw an opening and seized the opportunity. He persuaded Deshawn to join him and took out Shan with a devastating and brilliant blindside.

In Survivor, the goal is to take out the biggest threats while still getting them to vote for you in the final three. So maybe the most telling moment of the depth of their respect for each other came as Shan was grabbing her torch and telling Ricard he had her million-dollar vote.

TVLINE | Now that the show has proven it can still deliver the goods with a truncated 26-day schedule, COVID aside, will the show ever revert back to its original 39-day game?
First off, thank you for your compliment that the show still delivered even with a 26-day schedule. I’m glad to hear you feel that way. The 26 days came as a result of having to shoot two seasons back-to-back with no break. We knew we couldn’t do two 39-day seasons, so we spent a lot of time working to make sure that we could do a full season in 26 days and that the experience would still be satisfying to the players.

It’s still too early to decide if we would ever go back to 39 days, but I will say that we do believe in the 26-day schedule. And as you’ll hear during the Survivor After Show, the players fully agree that 26 days still gave them absolutely everything they wanted from their Survivor adventure.