Between all the parallel universe talk and the sight of two Reggie Mantles, this week’s Riverdale might be the most bewildering hour of TV we’ve seen this year. Where do Riverdale (and Rivervale) stand after the milestone 100th episode?

Tuesday’s installment — the final one in the five-episode “Rivervale” event — opens on a dead body on a lonely country road, clutching a comic book. But Archie is alive (!), and Betty tells him about this dream she had where the whole town sacrificed him. Yes, the last few episodes were all dreams, we learn, and Jughead heads off to school to teach. But in the halls, he sees Archie in a letterman jacket and Cheryl in her cheerleading outfit. Did he travel back in time to high school? In the bathroom, he runs into Ben Button — didn’t he die in Season 3? Jughead must be hallucinating, right?

He’s definitely confused, because Archie and Betty have to remind him they’re getting married this weekend and he’s the best man. But then Betty gets a call from Dr. Curdle, who just discovered the dead body of… Jughead! He goes to the morgue to investigate and stares at his own dead face. He’s the dead body from the beginning, and when Jughead looks through the dead guy’s things, he finds that comic book. He digs deeper and discovers a whole stack of comics that are about him and his friends. Reading them, he gets to the point where he’s reading about himself reading the comics — and then the pages go blank. What in the name of Poppa Poutine is going on around here? 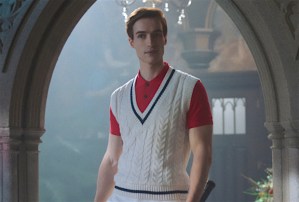 He tells Tabitha he thinks they’re living in a parallel universe triggered by the explosion of Hiram’s bomb under Archie’s bed, with Rivervale serving as a “warped reflection” of Riverdale. It’s definitely warped around here: Veronica tells Jughead that her dad Hiram died the night before her quinceñara, and when Jughead brings up Jason Blossom’s death, Cheryl says her twin brother is alive and well — and there he is, ready to play tennis! Plus, Veronica and Reggie hear a knock on the door, and it’s Old Reggie, aka Ross Butler, who played Reggie in Season 1 before Charles Melton took over. Whoa: We don’t know where this is going… but we kinda like it. 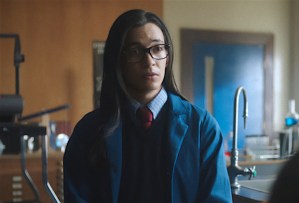 Jughead goes looking for a library book about parallel universes, but it’s already checked out by Dilton, who’s also alive and a physics teacher now. (And hey, Ethel Muggs is his assistant!) Dilton agrees with Jughead’s theory, but he tells him to just let the parallel universes be. Jughead still wants to know who killed his doppelganger, though. Meanwhile, the two Reggies fight over who’s the real Reggie — this is all very meta and pretty funny — and Ronnie even suggests a threesome (!), but they don’t want to share. Plus, at his bachelor party, Archie confesses to Jughead that he wishes his dad Fred could be here to see this, and he keeps imagining he’ll show up for the wedding. Hmmm…

Cheryl bursts in holding a ransom note: Jason has been kidnapped by… the Black Hood! (The name doesn’t ring a bell with anyone but Jughead.) Thanks to Jughead’s memory, they head straight to the Whyte Wyrm, where they find Jason, and Sheriff Keller shoots and kills the Black Hood — who is Clifford Blossom this time! (Huh?) Meanwhile, the guy we knew as the Black Hood — Betty’s dad Hal — gives a warm speech at her rehearsal dinner, but the festivities are cut short when they learn that Cheryl was found strangled to death. The two Reggies killed each other in a botched duel, too. Jughead goes to Dilton with the news that people are dying, and his response is: “Isn’t it glorious?” The universes have become “dangerously unstable” and are about to implode, he says, and he’s excited about the scientific discovery of it all. But soon, he collapses dead, poisoned by Ethel, who wants to help Jughead save Riverdale… and she thinks she knows how.

They agree that Hiram’s bomb triggered the dual universes, and they’ll need to recreate that event to reverse it — but that means Rivervale will cease to exist. Since Archie and Betty are busy getting married, Jughead recruits Veronica to join him and take their place on Archie’s bed. (She’s game: “Let’s make out to save the universe… Here’s to ‘Vughead’ becoming canon.”) But when Jughead gets to Archie’s house, he’s stopped by Archie… who just got done strangling Veronica. Archie is the killer! He shrugs off all the murders (“Everyone comes back to life in this universe”) and won’t let Jughead destroy Rivervale if there’s a chance his dad might come back, too. He wrestles Jughead to the ground, but he’s shot dead by — Betty in a wedding gown! They go upstairs to recreate the moment the bomb went off (hey, some “Bughead” action!), but they’re interrupted by… another Jughead. He says there’s a way to preserve both universes. Sure, why not, at this point? 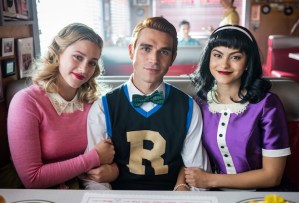 Parallel Jughead explains that when he died, he went to a magical afterlife where Pop’s was a retro diner/comic book shop, with Archie and the gang dressed in classic ’50s Archie Comics outfits. He found a special issue of the comic book there that explained how the parallel universe was powered by creation, which counteracts the bomb’s destruction. He tells Real Jughead: “You write, and Rivervale lives.” But he’ll have to live in isolation, typing away in the bunker alone. Betty protests, but Real Jughead reassures her: “We got this. You and me, saving the universes.” With Real Jughead typing away, Parallel Jughead and Betty recreate the bomb scene, and Archie comes back to life to stop them — but when the bomb ticks down to zero, nothing happens. Jughead and Betty come downstairs to find the rest of the gang enjoying a nice quiet dinner, and they can’t even remember why they went upstairs anyway.

Parallel Jughead moves his box of comic books into his apartment with Tabitha while Ethel feeds Real Jughead burgers down in the bunker. But what about Riverdale? We cut back to that moment with Archie and Betty in bed and the bomb ticking right underneath them, and Betty gets a call from a strange voice warning her about the bomb. We see Jughead typing in the garage… and ducking as a huge bomb goes off nearby. And we won’t find out what happens next until March?!