As The Flash‘s 5-part “Armageddon” event comes to a close this Tuesday on The CW, another familiar face will resurface — that of Arrow‘s Mia, the daughter of Oliver and Felicity.

When last we saw Mia, in Arrow’s series finale, she was on her way back to 2040 (thanks for the Time Courier, Sara?) after being plucked from the future to attend her father’s funeral. And the Arrow episode prior to that (aka the Green Arrow and the Canaries backdoor spinoff pilot) had ended with Mia and her brother William regarding the family’s “pet rock”/hozen, when tranq darts took them both out, after which William was dragged away by… whom?

Meanwhile on The Flash, “Armageddon” Part 4 has revealed that Barry’s suddenly crappy life was in fact the handiwork of Eobard Thawne and a Reverse-Flashpoint he had created. Barry wound up righting reality and returning to a 2021 where Joe West is still alive, though Thawne appears to have one final trick up his sleeve…

Now that you have your refresher (whew!), here is Arrow alum Katherine McNamara previewing her encore as Mia, and how it was “really moving” to suit back up.

TVLINE | What were you up to when you got the news that you would get a chance to play Mia again, and what was your first reaction?
I got a note from my team saying, “Hey, they reached out and asked if you would be open to coming back as Mia Smoak/Green Arrow on The Flash,” and I said, “Absolutely! Do I need to pack a bag now? Let’s go!” You know as well as anyone how special Mia is to me and how much that whole world means to me, and I always have such a lovely time. I jump at the chance to go shoot some arrows on television. 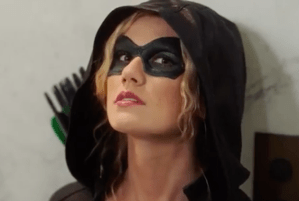 TVLINE | Were you already in fighting shape or did you have to squeeze in a couple of training sessions? Because Mia’s hitting the bag pretty hard during one of the scenes.
She is, indeed. You know me, fitness is a huge part of my life, but it definitely was different, and I’m glad I had a little bit of time [to prepare] because Mia, being the daughter of the one and only Oliver Queen, has got to stay fit.

TVLINE | What was it like suiting back up? Did they get your old costume out of storage, or did they give you a new one?
I had the same suit, and when I put it on for the first time it was really moving, actually. It’s one of those things that it’s been so demarcated by the pandemic, Arrow ending, and coming back to do this episode of The Flash felt like coming back home. It felt like an old friend, and I felt very welcomed on set — all those crews are incredible, and the cast is so lovely. It felt as though I was doing what I’m supposed to be, and in the right place at the right time.

TVLINE | What is Mia up to when we see her?
Well, you pick up with Mia two years after we last saw her, and you get little glimpses of what her life has been. We see that she’s in a very dark place — she’s gone rogue, in a way, and become very obsessed with solving this one problem and this one missing piece in her life. As we know, when Mia gets focused on something and you give her a bone, she’s going to run with it until she wins, and that is what she’s doing. She will let nothing get in her way. But this does happen to take her through Central City where they’re having their own issues. Mia plays well with others when she needs to, and there’s nobody like Uncle Barry and Aunt Iris to come in and tell her what she needs to hear. 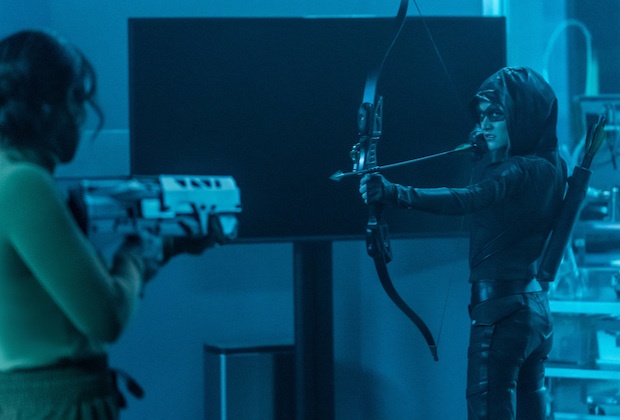 TVLINE | What specific dynamics do we get to see between Mia and other characters she visits with?
There’s a lot, actually, and that’s something I was so grateful for. [Showrunner] Eric [Wallace] and the rest of the team of writers really thought about what Mia would be doing two years from now. Mia was not worthy, in her mind, to take over the mantle of Green Arrow. [During Arrow‘s final season] she had just gotten her father back and just gotten a chance to understand why he made the decisions that he did, and then she lost him again. And so in that sense, she understood, finally, what her responsibility to that mantle and legacy is. and she did not feel ready.

Moving through that and having lived with that for a couple of years… it’s a lot, and she’s really going through a lot of the same struggles that Oliver did, about the line that’s drawn to get justice — “What are you willing to sacrifice in order to accomplish your goals as a hero, and does that still make you a hero?” Mia has never been afraid to do what she has to do to get the answers she needs or to accomplish a mission, but Barry and Iris and the rest of the team know when to take a bit of pause, and have so much heart and care for the people around them, and that it’s exactly what Mia needs at the moment.

TVLINE | Did you get to do anything new as Mia with this episode?
Actually not new, but I spent a good portion of the episode in heels and a cocktail dress, which is quite uncommon for Mia. [Laughs] 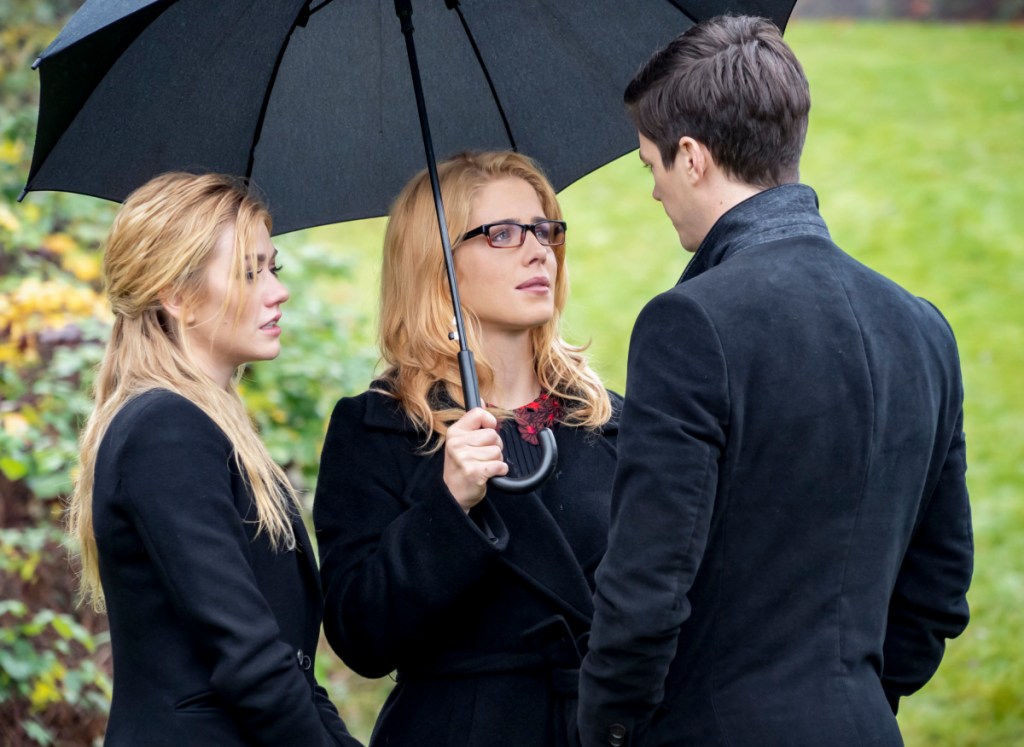 TVLINE | I had to remind myself that it was the Felicity of 2040 who went off to be with Oliver, and that Felicity in 2021 is still alive somewhere in the countryside. Will we get any update on or mention of Mia’s mom?
There are a few mentions of Felicity. She definitely comes up. Given the fact that Mia ends up in a place where the two people that know her parents probably better than most are right there to guide her, it’s a huge gift, and there’s definitely much talk of the lineage.

TVLINE | And you may have alluded to this with the party dress, but…. What sort of note will the 5-part “Armageddon” event end on?
With all of these Arrowverse worlds, it always ends with a bit of a question — and maybe a cocktail party, and definitely a lot of grey area. What I think is so clever about “Armageddon” is that every person who you think you know where they stand and what they stand for comes into question, and there really are no heroes and villains. They’re just people trying to get through the day and trying to deal with what this universe that is increasingly complicated as the years go on presents to them. That says a lot about where many of us are in the world right now, where we don’t really know which end is up and we’re trying to navigate it and figure it out as best we can with the people around us.

Want scoop on The Flash post-“Armageddon,” or for any other show? Email InsideLine@tvline.com and your question may be answered via Matt’s Inside Line.