The following contains spoilers from the Dec. 12 fall finale of ABC’s The Rookie.

This Sunday in The Rookie‘s fall finale, Nolan got thinking about ringing in the new year with, well, a ring… Wesley tried to get out from under Elijah’s thumb… and Tim and his sister got a blast from their father’s past. In the end, whose (if anyone’s) Christmas wound up being merry?

The answer is that Wesley and Angela (played by Shawn Ashmore and Alyssa Diaz) perhaps enjoyed the closest thing to a happy-ish holiday. Because although his mission to plant a bug in Elijah’s office wound up blowing up in his face, an unexpected act of revenge by La Fiera’s right-hand woman cut down Isaiah’s crew — though Elijah, the sole survivor, did threaten to get his onetime consigliere disbarred for breaking attorney/client privilege.

And Tim (Eric Winter), he got a bit of closure in dealing with his ailing, abusive father (guest star James Remar). Having found a handgun hidden inside the wall of the family home, Tim deduced that Dad had years ago killed the husband of a neighbor with whom he was having an affair. The truth, however, turned out to be that it was the mistress who shot her spouse when he started beating her; Tom then did his best to cover it up.

Elsewhere, Nyla (Mekia Cox) begrudgingly had dirt dug up on Donovan’s ex-call girl fiancee, which effectively ended her ex’s engagement and in turn made him a bigger custody foe than before, while Nolan (Nathan Fillion) saw his own thoughts of betrothal get dashed when a romantic date with Bailey (Jenna Dewan) was crashed by… her ex-con husband (played by Dewan’s real-life partner, Steve Kazee)?!

TVLine spoke with showrunner Alexi Hawley about the fall finale’s big developments, just as he was working on Episode 15 of… wait, how many?!

TVLINE | How many episodes are you doing this season?
We’re doing 22 this year, a full 22.

TVLINE | How big of a blow-up is this Bailey’s husband thing going to be? As a veteran TV watcher, I have to think he maybe just didn’t clarify ex-husband. Or, “I never signed the divorce papers” and all that.
No, he’s her husband. Obviously we will get in to why she didn’t tell John and all that. Going into the next episode, we will be teasing a complicated history there.

TVLINE | What’s funny is that earlier in the episode, when Nolan was FaceTiming with his son on Bailey’s phone, I thought for sure a suspicious text alert was going to pop up.
No, we went bigger than that. 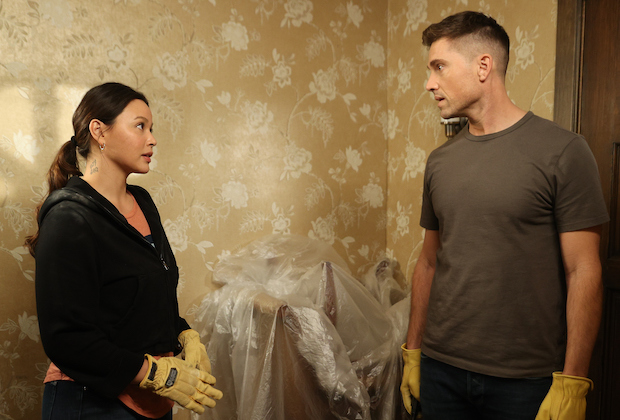 TVLINE | Did Tim get some closure from this storyline with his dad?
I think he gets some closure. I wasn’t interested in wrapping this up with a neat bow. I mean, he had a traumatic childhood and his dad was not a good guy, so I was interested in exploring the different experiences that Tim and his sister (guest star Peyton List) had with their father, and how it fractured their relationship — and ultimately how, with a little bit of Lucy’s help, their relationship was put back together by the end of the episode. But his relationship with his father was not salvageable, and we didn’t want to act like it could be. Look, his last words to his father were, “I hope it hurts,” so we definitely lean into the fact that Tim is not walking away feeling good.

TVLINE | As much as you and I both get asked about “Chenford” happening, I think that what has been developing between him and Lucy (Melissa O’Neil) is so much more interesting, this deep friendship and affection.
I agree, the intimacy that exists between them is really special. I think the fact that they’re not romantically entangled makes it more special, because they are coming from a place of friendship and connection first, and not a place of romance.

TVLINE | I mean, that look on Tim’s face when they hugged at the end…. He has perhaps never looked more vulnerable.
No, absolutely. Over time they have earned that connection, and I think it is so much richer.

TVLINE | Many readers have asked my column what’s ahead for Lucy individually — perhaps more UC work…?
We’re not diving into UC work yet. Ultimately we’re going to lean into some personal journeys for her that I don’t want to spoil yet. And there might be a love interest coming around for her in the future. But yeah, that’s all I want to spoil for her.

TVLINE | Meanwhile, you ripped the rug out from under us after that sexy Halloween hookup between Nyla and her ex, Donovan (guest star Enver Gjokaj), by steering them straight into a nasty custody battle.
Where we’re going with that story is that this relationship has always been super messy, and her [undercover] past is something she’s still struggling with and that he is using against her. [What happened in the fall finale] ends up driving a fairly substantive fracture between them in the coming episodes. We get into it.

TVLINE | Enver has been recurring on NCIS: Hawai’i, did you get him back during or after his run there?
After NCIS, we got him back. The one thing that nobody tells you when you’re starting out as a showrunner is how much of your storytelling is dictated by which of your recurring actors is available. [Laughs] But so far, it works out enough. 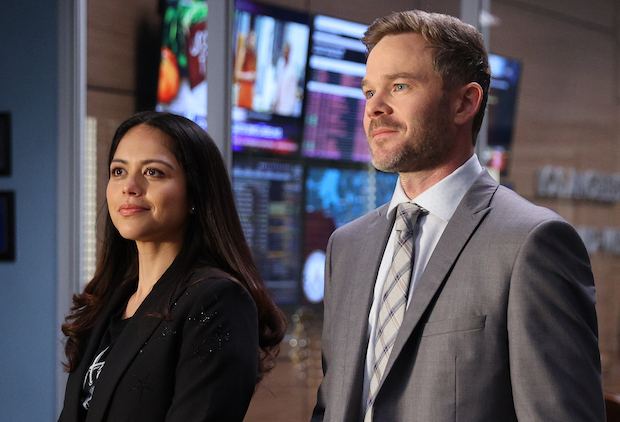 TVLINE | Now, tell me how the law works — can someone like Wesley possibly not get disbarred if they broke attorney/client privilege for the “right reasons”?
Look, in the same way that we’ve always made it important to try and deal with the real — going back to when Nolan killed a suspect in the line of duty in Episode 8, Season 1, and amped up more last season when we dove into the real issues with policing — we are living in a world where there are consequences to actions. So I would not come back from the break expecting there to be no consequences for Wesley’s actions.

TVLINE | Lastly, I was curious: In the shootout in the food pantry, were those the digital muzzle flashes you mentioned when you said The Rookie would no longer use live guns on set?
Yes, it was all digital gunfire. We had some squibs [to simulate bullet strikes], but that’s a safe practical effect. We use AirSoft weapons, which when you pull the trigger something happens, which is nice, but there is no projectile and we put in the muzzle flash. Sometimes we’ll even put in a cartridge ejecting [using VFX].

The reality is that we had been doing less and less real blank gunfire over the course of the show. In the pilot, when Tim and Lucy got into a gunfight with a guy in an alley, that was a practical weapon shooting blanks, but over time we’ve gotten more and more away from that. We do most of the VFX in-house now, so we’re not even paying for muzzle flash anymore, so there’s no reason to use practical weapons.