One of Succession‘s key characters dodged a bullet in the Season 3 finale… but did Waystar’s status as a media titan survive?

Sunday’s finale opens with Logan playing the kindly grandfather role, reading a book to Iverson and adding, “Your dad was OK, you know?” So what happened to Kendall? While the others play a game of Monopoly — they all cheat, of course — Comfry brings the news: She found Kendall floating in the pool, and the hospital kept him overnight, but he’s fine. A weakened Kendall walks in, chalking it up to “one too many limoncellos.” He might skip the wedding, though, and head home to talk to new lawyers. He’s considering dumping all his evidence against Logan on Instagram — which seems like a bizarre move, but who are we to question the decisions of Kendall Roy?

Gerri, meanwhile, has bad news: Waystar is facing a huge fine, and GoJo’s market cap has overtaken theirs, so the GoJo board may be looking elsewhere for a merger. Logan wants answers from Matsson and takes Roman along for the ride. On the boat there, Logan quizzes his son on his sexual deviancies and encourages him to “get straightened out” already. (Yeah, that’s gonna take a while.) When they get to Matsson’s villa, Logan gets right to the point and asks if this deal is happening or not. Matsson appreciates his straightforward approach, but he doesn’t think they have the technology to keep up: “We’re flying like a f–king rocket ship, and you’re sinking like a lead balloon.” 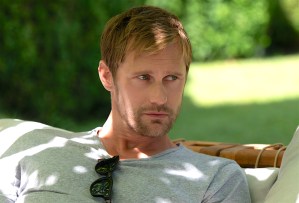 Matsson expresses his admiration for Logan’s past accomplishments, but he looks at him like a dinosaur. He wants to take the reins of their merged company and send Logan packing with a payout: “I make sense as the person to take over.” Matsson assures him that Roman would be “one hundred percent essential” to the transition, but Logan shuts him down: “This is not happening.” Matsson suggests a smaller swap of side assets instead, and Logan is open to it, so he sends Roman back to the wedding while they talk.

Roman joins Shiv and Connor for a sit-down with Kendall, and Shiv wants him to know they all love him. (Roman: “I suppose I don’t want you to die.”) They see Ken’s dip in the pool as a cry for help, but he thinks they actually all need an intervention a lot more than he does. Connor calls him out as “selfish and self-centered,” and when Kendall complains about being shut out by Logan as the eldest son, Connor cries out: “I am the eldest son!” He goes off about how he deserves the top spot at Waystar more than any of them, and instead, they all treat him like crap. The didn’t even congratulate him for his almost engagement! Well, subtract the “almost”: When he mopes to Willa, she decides to accept his proposal with a very reassuring: “F–k it! How bad can it be?” Congrats!…? 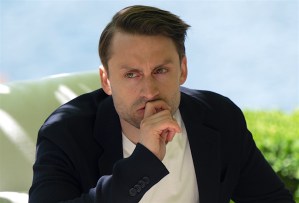 It’s time for the wedding, and Roman still wants to talk to his mom and convince her to ditch this guy. (Meanwhile, Logan is busy wheeling and dealing in a makeshift war room, and Greg is busy juggling Comfry and that Italian princess.) Shiv’s speech at the reception borders on a roast, but she makes it nice by the end, wishing them a marriage as fulfilling as hers and Tom’s. (Ouch.) Connor presents Shiv and Roman with a hunk of maca root, sharing his theory that Logan is trying to get Kerry pregnant. (Roman: “We need a plan to kill this baby.”) Gerri reports that a big finance guy just landed and is heading to Matsson’s. Hmmm… so why does he need financing for an all-stock deal?

With things going south, Roman decides to ruin Greg’s chances with the princess by calling him “an irrelevant pauper,” and Greg fires back that he’s “a sexual pervert.” But he snaps back into business mode when he sees Kerry whispering to Gerri, and he tells Shiv that lots of corporate people are circling in secret, and he’s not sure why. (Shiv: “Are we being f–ked?”) Roman admits to Shiv that Matsson did float the idea of GoJo acquiring Waystar… and Logan didn’t leave, did he? Shiv goes to Kendall for help and gets him up to speed: “Dad is doing us dirty.” Kendall doesn’t want to get involved: “Can you guys just do this without me?” He sits on the ground and confesses: “I’m not a good person. I’m bad.” He finally admits to them: “I killed a kid,” spilling out the whole story about the dead caterer. While he sobs, Roman reassures him he’s not a murderer. (He would’ve done much less to help the kid.) Ken is still a mess, but Shiv gets a call and runs off to take it, and Roman takes a few stabs at dark humor to cheer his brother up. 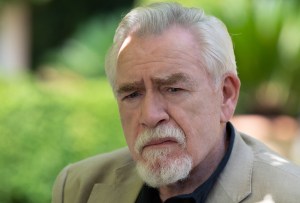 Shiv says it’s confirmed: GoJo buys Waystar, Logan cashes out and they’re left out in the cold. They pull Kendall together and head off to see Logan, with Shiv determined to stop this. Kendall reminds them: They’d need to approve of this move, with their shares of the holding company they got from the divorce, or it can’t happen. Shiv is ready to push Logan out, with the three of them taking over Waystar. Roman’s queasy about it, but he’s in. Shiv calls in Tom to slam Logan as “ailing” on ATN — and hey, Greg is making headway with the princess! Tom clues him in on the impending power grab and wants him onboard as his “attack dog.”  He promises him a place “at the bottom of the top” — ooh, tempting! They shake on it and share a warm hug.

Kendall, Shiv and Roman get to Logan’s hideout and tell him they’re feeling “out of the loop.” Shiv demands answers, but Logan wants Kendall out of the room first: “I don’t trust him.” Roman stands strong, though, so Logan explains that they need to sell now before it’s too late. Kendall wonders how much more money he really needs to add to his pile, and Logan fires back that they should “make your own f–king pile.” He wants to take Roman aside, telling him Matsson wants him along for the ride, but Shiv and Kendall insist he can’t be trusted. Shiv reminds him they can kill the deal, and Logan rages, screaming at them and calling them “morons.” Uh-oh: He has Caroline on the phone, and she agreed to revise their divorce deal to cut the kids’ influence. (Shiv: “We just walked in on Mom and Dad f–king us.”) Roman pleads for him to reconsider and asks why, and Logan responds: “Why? Because it works. I f–king win.” Roman’s pleas to Gerri fall on deaf ears, too. As Logan leaves, he gives a pat on the shoulder to… Tom? So he’s the one who tipped off Logan? He gives Shiv a reassuring kiss on the head… but she doesn’t look reassured.

Grade the Succession finale in our poll, and then hit the comments to share your post-season thoughts.