Gandia and Arturo, two of the biggest villains on Money Heist, weren’t even in the second half of Season 5, but their negative energy could still be felt as the series came to an end.

Tokyo died taking out Gandia, and hallucinations of Arturo, whom she nearly killed, caused Stockholm to slowly lose her mind and turn to morphine and antipsychotics to make him vacate her psyche. Enrique Arce, who played Arturo on the wildly popular Netflix series known as La Casa de Papel in its native Spain, said being one of the baddies on the drama had its drawbacks.

“People would yell at me on the street because they hate Arturo so much,” the actor laughingly told fans and journalists at a recent press event. “But one of the best things that could’ve happened for me was Tamayo and Gandia. People hate them even more.”

As if channeling his inner Arturo, Arce would wisely deflect and point out the fact that Gandia was much more deplorable than anyone else on the show. Jose Manuel Poga, who costarred as the very hateful character, seemed so embarrassed by the distinction, all he could do was smile and wave. Poga couldn’t justify Gandia murdering fan favorite Nairobi, so why even try? 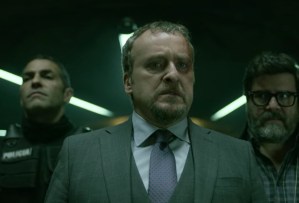 Fernando Cayo, who played Colonel Tamayo on the other hand, tried to defend his Money Heist alter ego. After all, the series finale almost turned him into a sympathetic figure, given that whole gold-plated brass twist.

“The Colonel is not all bad,” Cayo reasoned. “He’s a family man and a husband who was just trying to do his job. Did he mess things up for himself and the Spanish government? Yes, but he never stopped trying to win, even when he couldn’t.”

Who do you think was the worst and most evil Money Heist bastard? Vote in our poll, and drop your thoughts in the comments.