We hear you, Sex and the City fans: Where in the world is Samantha Jones?

The hit comedy returned on Thursday with the HBO Max revival And Just Like That… — read our full premiere recap here — but with the core foursome missing one of its members. Sarah Jessica Parker’s Carrie, Cynthia Nixon’s Miranda and Kristin Davis’ Charlotte are all back, but Kim Cattrall’s Samantha is notably absent. (Cattrall and Parker had an infamous rift behind the scenes, and Parker said early on that “Samantha isn’t part of” And Just Like That.) So how did the new show write off Samantha?

We didn’t have to wait long to find out: In the premiere’s opening moments, Carrie, Miranda and Charlotte were approached by old pal Bitsy Von Muffling — remember her? — who asked where Samantha is. Charlotte told her “she’s no longer with us,” which made it sound like Samantha has died… but no, they explained that she just moved to London for work. 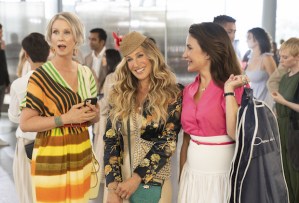 The story didn’t end there, though. Later in the episode, Miranda mentioned to Carrie how they never talk about Samantha anymore. Carrie revealed that she let Samantha go as her book publicist, and after that, Sam stopped returning her calls and texts. Carrie’s reached out to her multiple times, but has never heard back. “I thought I was more to her than an ATM,” she said, adding that “I always thought the four of us would be friends forever.” (Us, too.)

Samantha’s presence was felt in Episode 2 as well, after Carrie’s husband Mr. Big died of a sudden heart attack. At his funeral, Carrie insisted there be no flowers, and she got upset when she saw a bountiful display of white flowers atop his coffin — but she said they can stay when she learned that Samantha sent them. Afterwards, Carrie sent a thank-you text to Sam, and we saw that she’s sent several texts that Samantha never responded to.

What do you think of how And Just Like That… handled Samantha’s absence? Are you still holding out hope for a Kim Cattrall return? Drop your thoughts in the comments below.