This week on Disney+’s Hawkeye, it was a race against time (as kept by a vintage Rolex), as Clint and Kate followed new leads — and in doing so landed in the crosshairs of a new adversary.

Picking up right where Episode 3 left off, the threat posed by the Ronin blade Jack held to Clint’s throat lasted nary a second, as Jack and Eleanor came to realize that their uninvited guests were but Kate and… an Avenger?! Sat on a couch and called on the carpet, Clint and Kate kept mum about what exactly they were up to, though they did cop to using Eleanor’s laptop to tap into the Bishop Security database. After, Eleanor “asked” Clint to keep her daughter out of his business, and when he contended that Kate has actually been holding her own, Eleanor taunted him with a reminder of how that worked out for Natasha. That said, Clint promised that at the very least, he would keep Kate safe.

That night, spurred by Eleanor and Jack’s talk of the importance of “family” at the holidays, Kate showed up at the apartment to give Clint the “Christmas movies night” he missed at home. And while watching It’s a Wonderful Life in ghastly Christmas sweaters, Clint shared (over some flashbacks to the MCU) how he lost his wife and kids to the Blip, while Kate surmised that he in fact was Ronin.

Checking in with Laura, Clint learned from his wife (remind me, what is her background?) that the Sloan Limited for which Kazi works is a front for the Tracksuit Mafia, and that no less than Jack is the CEO. Laura also got Clint thinking about what else might have been taken from the Avengers compound and circulated on the black market — namely, the Rolex watch that we know the Tracksuits got their hands on in the pilot. Afterwards, Clint got the drop on Kazi and did his best to compel Maya’s No. 1 to stop her from chasing the “ghost” that is Ronin — before it gets her killed.

Kate meanwhile was tasked with retrieving the trick arrows that were deployed during last week’s car chase (since they sadly lack, in her opinion, a “boomerang” function). To that end, she recruited LARPers Grills, Missy and Wendy (they of the reliable first-responder ties) to infiltrate the NYPD evidence vault — and they eagerly obliged. That night, Clint came back to the apartment to find LARPers Missy and Grills kicking back with Kate, negotiating their recompense for helping out: enough materials to fashion themselves new costumes… plus two more, Kate winked. Wendy then arrived with the reclaimed arrows, though had to begrudgingly turn over to Clint the embroidered tote bag her wife had made for her, to lug them around in.

Tracking the location transmitter on the aforementioned Rolex — which apparently contains identity-comprising intel on its owner (hmmm…) — Clint and Kate staked out a rooftop across from an apartment building. While Clint carefully planned their approach and exfil, Kate slipped away and simply jogged across the street and hopped a ride up in the building’s elevator. Picking the lock, she entered an apartment with curious strobing lights (as in an alarm used by the deaf) and quickly found the Rolex — alongside a pad of paper filled with notes on Clint’s family. Just as Clint warned Kate to make a run for it, we heard him get jumped, while Kate herself had to grapple with the apartment’s owner, Maya Lopez. 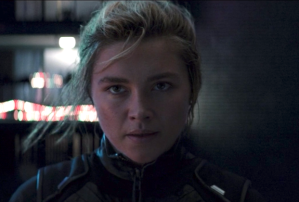 Kate dashed for the zipline Clint had set up outside the window and glided… most of the way… down it, hitting a brief snag along the way. By the time she got to the rooftop, Clint was slugging it out with a costumed assassin, while Kate herself faced off with an arriving Maya. After being “tasered” by Clint’s opponent, Maya slipped away/was allowed to go by Kate, who had her bow drawn on her. Clint meanwhile yanked off his assailant’s mask to reveal that it’s Yelena Belova (played by Florence Pugh), as in Natasha’s adoptive sister. (As established in the Black Widow movie’s bonus scene, Julia Louis-Dreyfus’ Contessa Valentina Allegra de la Fontaine sicced Yelena on the man responsible for Natasha’s death, meaning Clint.)

After incapacitating Clint with one of the red taser things and advising Kate not to shoot her with but a shake of her head, Yelena herself slipped away. Clint then firmly and clearly informed Kate that their partnership, as it were, is done, now that a Black Widow assassin is also on their tail.

“This has gotten very real, very quickly, so I’m doing this alone,” Clint said. Kate contended that she knows the risks and chooses to face them, but Clint was unmoved: “Go home, Kate. It’s over.”

What did you think of Hawkeye Episode 4 of 6? And what do you think the identity-compromising Rolex is all about? (Can it simply link Clint to Ronin?)