The following contains spoilers from the CSI: Vegas season finale.

This Wednesday in the CSI: Vegas season finale, Max’s team diligently worked with Sara and Gil to get the goods on Anson Wix and also find/save Hodges. After running into dead end after dead end, it was a smudge of counterfeit casino fragrance that led the CSIs to a beaten but breathing Hodges, whose testimony will put wily Wix behind bars on a variety of charges.

While Max celebrated the big win by reclaiming her office at the lab, Sara and Gil opted for the thrill of a ride on his favorite roller coaster (which they somehow made feel cozy and romantic).

Ah, but Sin City never sleeps, and in a final, season-ending teaser, we saw a very strange, all-white room covered with scribblings. The camera panned down to a pair of black-gloved hands scrawling a word that… well, it sure looked familiar to this writer. But maybe we see what we want to?

TVLine spoke to showrunner Jason Tracey, who penned Wednesday’s finale, about the “sequel” season gone by, that unsettling teaser and — perhaps most important of all — whether Jorja Fox and William Petersen will return as Sara and Gil, in the event that CBS renews the procedural. 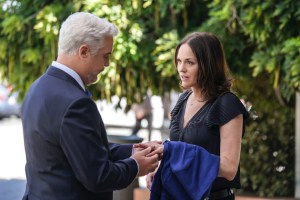 TVLINE | You had a bit of a balancing act with this series — bringing the vets back with a story that longtime CSI viewers would enjoy, while also introducing the new half of the cast. All told, how do you think it went?
It was a lot of fun. If that’s how I’m judging success or failure, I enjoyed myself, and I think the writing staff did, too. And I know that the cast did. We felt pretty good about how it all came together in the end, but everybody who sees the finale, they’ll be the real judge.

TVLINE | Did you get any specific feedback from Jorja [Fox] and Billy [Petersen], about how it felt to be back, if it was like slipping on an old shoe…?
They were fantastic from jump, and we worked so closely together for a long time to kind of get this whole thing ready, because of the COVID. We were itching to sort of hit the floor by the time we were ready to go, and I think they feel good [about how it went]. You’ll have to ask them, but I think we all felt pretty good. 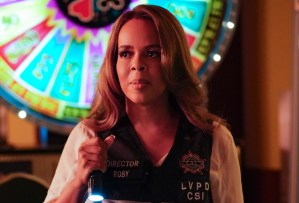 TVLINE | Specifically in the finale, how important was it for you to have both teams play a role in the final takedown? It was a bit of Sara/Gil, a bit of the new people….
That’s sort of the spirit of this whole franchise, that these folks are united in common purpose, so you want to see them click together and be professionals and work together as a team. That way, everybody did have a part to play.

The marriage of old and new was gratifying because by the time we rolled around into the finale, the new folks had earned their stripes even though it was a playoff to a story that really originated out of the original characters. Hopefully, we had set the table where everybody deserved a full serving.

TVLINE | I liked that moment where Max kicked Wyatt out of her office.
That was one of my favorite scenes to write of the season, for sure! 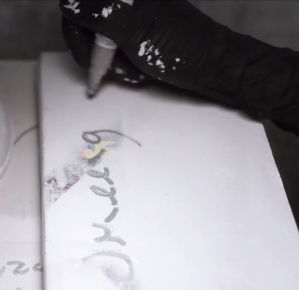 TVLINE | Regarding the final teaser at the end: Was going with Sqweegel (an elusive serial killer from the original CSI) a slam-dunk, or was there a runner-up for what you might do for Season 2?
Actually… that may not be Sqweegel. That may just be black gloves. I’ll just leave it at that.

TVLINE | Really? But it looks like they’re writing “…W-E-E-G…”
No, if you look at what he’s writing, it’s actually his own made-up language that’s based on the Voynich [manuscript], those crazy, medieval texts. For your readers and for yourself, I’ll just say “there is a world of possibilities,” but you might be looking at a brand-new madman there. Everything is open interpretation until it’s not, and we’re a long way from being able to tell those stories in Season 2. I’m going to open it up for a new room of writers, and we’ll figure out where we go from there.

TVLINE | What are you hearing on Season 2? Is there any permutation of the viewership numbers that gets you renewed?
Yeah, fortunately the network has been really supportive, really happy with the creative, and kind of delighted about the Live+7 [playback numbers], the hooks that this thing has into the audience. It’s been a buoyant number in the back half of the season, and… fingers crossed. They’ll let us know. It’s on my Christmas wish list to have some more clarity on that, but I won’t speak for [CBS]. I’ll just wait patiently for a hoped-for pickup.

TVLINE | Are Jorja and Billy definitely on board if there’s a renewal?
There’s no expectation on them. The door will always be open to a couple of legends, but we only asked them to come back to help us tell this finite number of episodes. It’ll be up to them and the studio/network to kind of figure it out.

TVLINE | So… is there a scenario where CBS says, “We want you back, but only if you can guarantee a certain presence for Sara and Gil”?
I don’t know. I’m not privy to all the conversations that happen at the studio and network. I know they’ve been really gratified by this story and by the work that those actors did. I was, too. CSI is a mystery show, and right now the future is a bit of a mystery for us. But much like how most of our episodes end with a happy ending, I think that we’ll probably get there in the end. 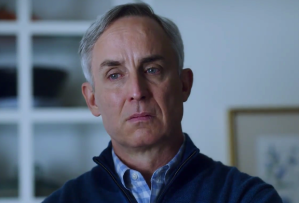 TVLINE | Were there any other series vets that you hoped to have swing by, if only for a scene? Or did you have on everybody you wanted?
We got everybody that we wanted for the telling of this particular story — but I will say that my appetite is large, and the world of possibilities from the run of the franchise across four different iterations in the past…. I’d be like a kid in a candy store if I got a Season 2, to kind of “go shopping” and hopefully tap in some familiar faces.

TVLINE | What would you like to get into with the new characters, if you are renewed for another season?
So much. This was a great introduction and kind of an amuse bouche for a whole new chapter and some interesting characters. For one, I want to broaden out the world of the morgue; when you go down there, there might be different places that we can add and populate. Also, I think that Folsom and Allie (played by Matt Lauria and Mandeep Dhillon) did tremendous work for us, and I want to make sure that we get to continue to tell their story and also kind of get some new folks to bounce off of out in the field.

And then with Max, Paula [Newsome] is just a delight to work with. Max had to command this ship that was in very turbulent waters, so it’ll be fun to have a bit more of a ramp with her where the whole lab doesn’t feel under attack. There are facets of her character that we haven’t even gotten to explore because she was so reactive this season. It’s exciting to think of where we can go with each of the characters. 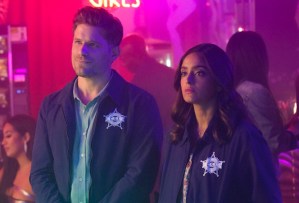 TVLINE | And what was Allie holding at the end? Her melted apartment key?
Exactly. When we first meet [here and Folsom], she was given a key by Mark and asked to move in with her primarily off-screen boyfriend. The question was: Would Folsom have anything to say about her relationship? I think he took it upon himself to finally make a statement.

Want more scoop on CSI: Vegas, or for any other show? Email InsideLine@tvline.com and your question may be answered via Matt’s Inside Line.