Chicago P.D.’s Hank Voight better send Halstead the largest Edible Arrangement after the Intelligence detective found a way to spare him and his career. With North’s proposition to take down Voight looming over Halstead’s head, Wednesday’s fall finale saw him choose a third option: blackmail.

It turns out that North bribed several officers to keep his brother out of jail, and Halstead used that information to blackmail North into dropping his case against them — effectively putting the Roy investigation to bed.

And in a surprising turn of events, Chicago Fire’s Gabby Dawson and Matt Casey are no longer the only #OneChicago pair to elope at City Hall. The hour ended with Halstead and Upton exchanging vows in a low-key ceremony — they wore their street clothes — and embark on a new journey as a married couple.

New episodes don’t arrive until Wednesday, Jan. 5, but we’re filling that void with some much-needed answers about the episode’s major developments. TVLine hit up showrunner Gwen Sigan, as well as stars Jesse Lee Soffer and Tracy Spiridakos, via email to shed some light on that impromptu “Upstead” wedding and tease what’s ahead after the Roy investigation. Check out our exclusive interview below. 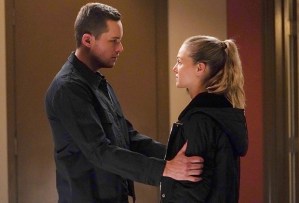 TVLINE | Hailey and Jay immediately eloped at the courthouse. Why was that the right decision for them instead of waiting and planning a huge ceremony with their friends and family?
GWEN SIGAN | It’s so fitting to me that this is how it happened for these two characters. They’ve been through so much together (this season especially) and this was a completely emotional decision made inside a moment — they wanted something good, they wanted something permanent that made all the events of the episode worthwhile, they wanted connection — and they didn’t want to wait another second.
JESSE LEE SOFFER | I don’t think their characters are the type that need to celebrate it, or the type that really needed to discuss marriage and a wedding. They’re not ceremonial or sentimental in that way. They’re passionate people. And they’re very honest, very real people so I think after getting over this huge hump with North, the FBI and Roy, they wanted to put it behind them as fast as possible. The next step in their lives is, “Well, let’s be together,” so it was logical.
TRACY SPIRIDAKOS | With everything that’s been going on, the connection between them has been “Fractured” (see what I did there?!), and they are both desperate to get it back. Deciding to get married was spur-of-the-moment in an effort to show each other that they’ll come out of this together stronger. It’s not for anybody else, it was just for them.

TVLINE | Do you think Jay and Hailey would want to plan a bigger celebration with friends and loved ones? Would Voight be an invited guest?
SOFFER | If they were ever going to have a celebration, I think it would be like everyone meet at a bar, like, ‘We’re all having beers and celebrating the fact that we got married without you.” It would be more of an afterthought. Of course, Voight would come.
SPIRIDAKOS | I don’t think Hailey would. I think the attention of a big celebration would actually make her shy. Plus, that’s not really her style. I think if there was a big celebration, Voight would be invited. They’re all a big family.

TVLINE | Are there any Upstead moments to look forward to in the remaining episodes?
SIGAN | Yes, there will be many.
SOFFER | Of course! Upton and Halstead are still partners, and they’re great partners. Obviously, we’re going to have bumps and hurdles. It remains to be seen what will happen with the marriage and relationship down the line. It might be something that gets in the way of police work, or police work might hurt the marriage and make them question things. Or it could be great, and they just belong together, and this is who they are.
SPIRIDAKOS | I’m sure they will be something! Maybe Jay can do some stuff wrong now for a little bit, and Hailey can be the voice of reason. I like that.

TVLINE | What are some of the issues Jay and Hailey face as newlyweds?
SIGAN | The truth about them, and any relationship, is that the ring doesn’t take away any complications/issues that are already there. These two have always been complicated — very much in love but also very different people. They each have flaws of their own, and we will continue to explore them. 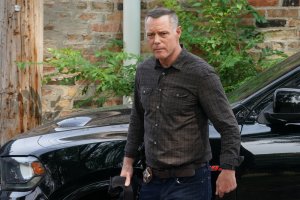 TVLINE | In the end, Jay protects Voight because he believes Voight is good for the city, but do you think Jay considered giving Voight up at any point? Why or why not?
SOFFER | I think at some point, he had to consider it. The FBI is on us, and it’s looking really bad. It could take down the whole unit — including Hailey, the person Jay loves the most. There’s an option and a way out, and what Voight did was wrong, so of course, he had to consider it. But Jay does believe Voight is good for the city, and he loves Voight, so he knows giving up Voight isn’t the right move. Who belongs in jail more? Roy, North or Voight? I think, in the end, Jay made the interesting choice.

TVLINE | It seems like the power dynamic between Jay and Voight shifted in this episode, especially when Jay sets that new ground rule for transparency with Voight to protect Voight from himself. How would you describe their relationship in the remaining episodes of this season?
SIGAN | I’m so excited to explore the new relationship between Jay and Voight, and Jesse and Jason [Beghe]’s performances in this episode only made it that much more exciting. We saw Jay get to a very empowered place. Through his struggle, he came out with a new understanding and a new way to work with Voight that felt acceptable in his head for the heavy cost he paid this episode. Now we’ll explore: Can that relationship work? Is Voight really willing to do that? What will it mean for both of their characters? As stated in this episode, “everyone changes everyone.” It’s going to be a fun ride to see that change play out in Halstead and Voight.
SOFFER | I do think that Jay has been through so much and learned so many lessons. He’s not a young detective anymore who makes irrational, brash decisions. He’s a seasoned veteran and a great foil to Voight’s character. Voight, who can walk in the shadows, needs somebody to pull him back. I think it was a logical next step for the two.

TVLINE | How would you describe Hailey’s relationship with Voight in the remaining episodes of this season?
SPIRIDAKOS | I don’t know what is coming up for Voight and Hailey… but she’s never been afraid to challenge him, and I can’t imagine that changing. But their relationship has also changed in an interesting way. I guess we’ll have to wait and see!

TVLINE | Before the Roy situation, Hailey’s views on policing aligned more with Voight’s. Given everything she’s gone through since, do you think those views have shifted at all?
SPIRIDAKOS | The way she sees Voight has shifted. As much as she respects him and sees him as family, she doesn’t hold him on a pedestal the way she used to. And I think the way she sees herself has shifted as well. She is also no longer on her own, where she didn’t consider the consequences of her actions. She has seen what those consequences look like now, and it ended up not only affecting her, but the person she loves the most in the world — Jay. This is not a place she wants to find either of them in again. I think she expects better of herself and is holding herself to a higher standard.

TVLINE | Do you think this close call with Roy will inspire Voight to make even more changes in how he does things? Why or why not?
SIGAN | Voight’s pushed many lines in his career, but I do believe this episode puts him in a different place. He’s seen the white knight of the unit [Halstead] affected, and he’s seen the cost that Halstead was forced to pay for his actions. He also saw that cost in Upton earlier this season. There’s also the reality always hanging there, that what he did to Roy, it didn’t work. All it did was cause lots of pain. So yes, it will spark some attempts at change.

TVLINE | What are some of the struggles Jay and Hailey face in the second half of the season? What can you tease about their journeys ahead?
SOFFER | I imagine that [Jay] and Voight are going to find this new dynamic and let it continue to evolve. It’s been growing and changing for a while now, and we’ll see how that plays out. Hopefully, Voight lets Jay in some more, and they continue to trust each other. That couple put Jay in some situations that he really doesn’t like, but maybe it also helps Voight make some decisions in a more morally sound way. I’m sure [in] the second half of the season we’ll see that different dynamic between the two of them.
SPIRIDAKOS | Hailey has a really crazy episode coming up that I am excited about. There is a very intense case, and Hailey is extremely motivated to solve it. And my stunt double Kelli [Victoria Scarangello] and I get to go into the Chicago River in January!
SIGAN | I’m incredibly excited about an upcoming Upton episode. It’s been one of the most ambitious episodes we’ve done on the show so far, especially from a production standpoint. I can’t wait to see what our director Chad and our crew pull off, and to see Tracy in this one.

Chicago P.D. fans, what did you think of the fall finale? Grade it below, then hit the comments!