Chicago Fire‘s fall finale on Wednesday saw Stella making her long-awaited return to the Windy City — but it was far from a warm homecoming.

In the episode, Boden came to Severide, looking for answers about Stella’s prolonged absence, but Severide had none to give, seeing as how his fiancée was still not responding to his many messages. Not knowing whether Stella was even interested in the job, Boden gave the permanent lieutenant gig to Pelham, who gratefully accepted. Meanwhile, Severide returned home at the close of the hour to find Stella in their apartment.

Below, showrunner Derek Haas reveals what’s going on with Stella and what it means for her future at Firehouse 51 and for her relationship with Severide.

TVLINE | Is Stella back in Chicago for good?
Yes, she’s back for good, but she has a lot of explaining to do, and it’s not just explaining to Boden why she didn’t immediately come back when she heard that Casey was leaving and more or less planted a flag on Truck 81, but also why she went dark on Kelly when he was obviously trying to reach her and had her best interest in mind. The next batch of episodes, certainly, the driving force of them will be Stella Kidd’s return to Firehouse 51 and all the offshoots of that.

TVLINE | At one point, I thought something horrible had happened to her, like that she was in danger, and that’s why she wasn’t answering any of Severide’s messages. I went to a dark place.
Nobody knew so you certainly are like, “What is going on here?” I know I’d be frustrated. 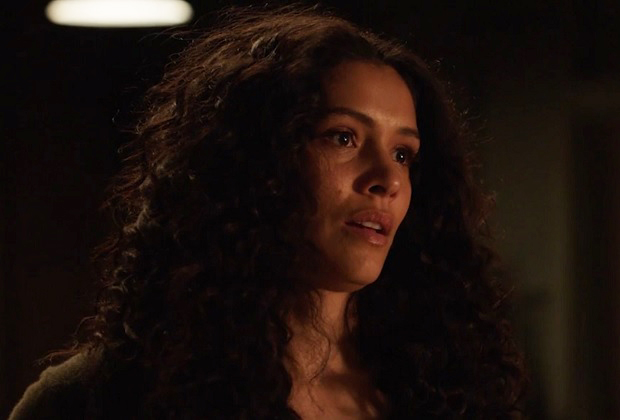 TVLINE | Is this about more than just being busy with work for her?
She’s definitely reassessing the hamster wheel that she was on and why she was on it, and sometimes when you step away and you’re doing good, you can have those moments of, “Is this where I should be focusing? Or should I be focusing on other things, like maybe even bigger, grander things?” So that’s part of the discussion of the upcoming [episodes].

TVLINE | That did not look like a joyous “I’m so happy to see you!” reunion at the end. How is Severide going to respond to her having been having been gone and then just abruptly coming back and all these questions that he has?
Well, you know, Vlada, he’s not the greatest communicator. [Laughs] So that’s going to stay within character and maybe he doesn’t communicate the greatest way. He’s not down with the fact that she left him for months when he thought it was going to be a couple of weeks.

TVLINE | Is this something that might put their engagement in jeopardy?
I would say that’s a question worth asking, for sure.

TVLINE | Pelham has gotten that permanent lieutenant position, but it sounds like Stella might not care about it anymore. How is she going to feel about the fact that the position has been filled?
I think she cares about Truck 81 and who’s on it. She doesn’t know [Pelham] at all and hasn’t been here to see how he’s been with the house for the last five weeks. I don’t think she’s going to be immediately down with, “Oh, yeah, great. We’ve got the lieutenant here.”

TVLINE | Boden’s also been such a good mentor to her. Is this going to put some strife in their relationship?
I think he wants some answers himself.

Chicago Fire fans, what did you think of the fall finale? Grade it below, then hit the comments!