This week on The Flash, the year 2031 brings on quite a role reversal as Barry Allen — desperate to stop himself from causing Armageddon — finds himself in a future where Iris is about to wed Eobard Thawne, while Barry’s own speedster alter ego is now Reverse-Flash!

The wildly unlikely Eobard/Iris (#Irobard? #WestThawne?) pairing actually brings to life a long-running joke between former cast member Tom Cavanagh, who returned for the back half of Season 8’s “Armageddon” event, and The Flash‘s leading lady, Candice Patton.

“Every iteration of Wells has a soft spot for Iris. And I’m pretty sure that every iteration of Iris cannot stand the Wellses. I don’t want to speak for Candice Patton, but that’s the Venn diagram it plays in,” Cavanagh posits. “And the amount of off-camera stuff I would do — ‘You know, if Flash dies, it’s me and you…’ — all speak to the idea that [the Wellses] all have a not-secret crush on her. 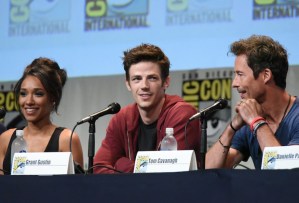 Patton, Gustin and Cavanagh at SDCC 2015

“Poor Candice would have to put up with my non-stop ‘This is clearly meant to be’ joking — like, ‘This is not meant to be!'” says Cavanagh with a laugh. “And now we have a storyline where we actually play that out. Neither Candice or I thought, ‘Well, that can’t possibly ever find a way to come to fruition,’ but now it has. For both of us [to play these scenes] felt funny and awesome and kinda cool and surreal… and very hard at times to stop from giggling.”

The aforementioned role reversal also means that Cavanagh got to don The Flash’s much comfier, red supersuit, versus Reverse-Flash’s yellow, leathery get-up. And yes, he got his own — no hand-me-downs from series star Grant Gustin!

“Look, we’re doing a television show called The Flash, and if two people are going to play the Flash, we should not be parceling out ‘1’ and ‘1A’ suits,” Cavanagh puts it. “They both should be grade-A suits, and that’s going to take effort and time and money, and our costume designer, Kate Main, and her crew of artisans put together a brilliant suit. 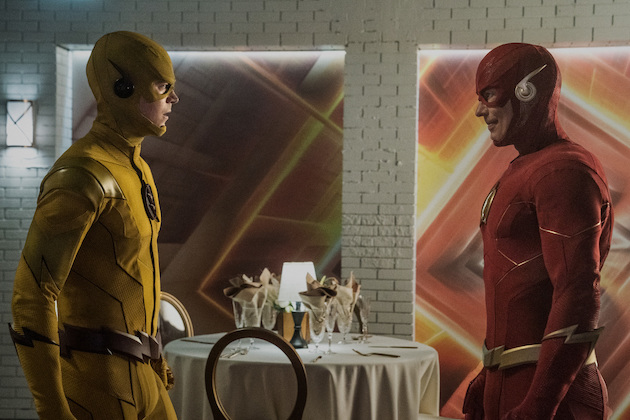 “As an actor, you’re honored to wear what they came up with,” Cavanagh raves. “The fittings were a delight and a joy, and it does spark the pulse a bit! I’ve done this show for a number of seasons, and next thing you know were fitting the Flash costume to my body. It was a really cool moment.”

Over the weekend, this TVLine writer tweeted that Part 4 of “Armageddon” (airing Tuesday night on The CW) is one of the best things that the Arrowverse has pulled off in years, full of great twists, big laughs and a lotta heart. Presented with that, Cavanagh says, “Credit where credit is due. The people who are saying the lines and walking through the moments on screen will get a lot of credit, but the writing comes first. I think it’s a brave move to put me in the Flash suit and Grant in the yellow suit. If you look at the [comic book] canon over the decades, I wouldnt say its an obvious move, but it’s definitely a card in your deck that you want to play — and this feels like the right time to play it. And being a part of it was thrilling.”