Camille and Ian’s back-and-forth over whether they’ll rekindle things culminated with an emotional kiss in the finale which, mind you, took place on the night before Ian’s wedding to Mira. Unbeknownst to them, Mira saw it happen with her own eyes.

That long-awaited lip lock sets the stage for a very messy situation for all three, but the Harlem boss is standing firm in her decision to bring Ian and Camille back together.

“That was something I knew from Day 1 that we were building towards,” she tells TVLine. “I knew that it wasn’t going to be an immediate thing and there was going to be a journey to getting there, but the romantic in me was like, ‘She’s going to show up, and she’s going to fight for love,’ and there are going to be people that are going to be like, ‘That’s really messed up, and that’s awful.’ But I’m one of the weirdos that actually believes if it’s your person, sometimes you just have to make a play before it’s too late. So I was very pro that ending, and I do believe that they’re better suited than him and Mira.” 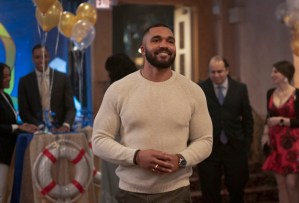 Meagan Good, who plays Camille, knew that the show was building towards something with the two lovebirds this season, but was still surprised by Camille and Ian’s love declaration in the final episode.

“I don’t know what I expected to happen,” Good shares. “I think Tracy and the writers did such an incredible job crafting this in a way where you don’t actually know exactly what’s going to happen, and you are totally invested in each one of the girls’ stories and how things ended up at the end of Season 1. I was definitely surprised.”

Harlem hasn’t yet been renewed for Season 2, but Oliver says they’re already working on scripts for next season. If the story does continue, expect to see the fallout from Ian and Camille’s kiss, among other things.

“What I would like to see is, What’s the aftermath of this very bold move that Camille makes in the finale? Are they actually going to get together? Is he going to apologize to Mira and still get married? And what does that mean for Jamison, who’s currently in a relationship with Camille?” she muses.

New episodes would also expand on the rest of the friend group, including Quinn (Grace Byers), who worked up the courage to ask Isabela on a date in the finale. “We’re going to see Quinn dating women and what that’s like, and also figuring out her career stuff.”

Plus, it looks like Angie (Shoniqua Shandai) takes a more serious turn in a potential Season 2. “We love the idea that this is a woman who’s finally accepting that, ‘Maybe my dreams are not going to work out the way that I wanted, and I have to get serious and maybe get a real job.’”