After Sunday, there would be no “beyond” for AMC’s The Walking Dead: World Beyond. The AMC limited series concluded its two-season run with an affecting episode that killed off two key characters, threatened to end a third, and dropped in a stunning blast from the distant past — all the way back to Season 1 of the mother ship. Who lived, who died, and who made a surprise cameo? Read on…

‘YOU’VE GOTTEN REALLY GOOD AT BEING A HERO’ | As “The Last Light” began, Jadis gave orders to jam all walkie-talkie frequencies for an eight-mile radius despite the fact that doing so would also hamper the CRM’s ability to communicate. At the culling station, Dennis — hey, he was alive after all! — made the fatal mistake of dreaming of a future with Huck. (We all know that any talk of tomorrow on a Walking Dead show is the equivalent of wearing a red shirt on Star Trek. Right, Percy?) When Iris, Hope, Silas and Elton arrived with the antibiotics for Dennis, it was determined that they needed to get three miles away to remain safe when the explosives went off. As for Huck, she said, “The people inside the CR don’t know what the military has been doing outside their walls. Dennis and I are going to make sure they do.” Before the kids took off, Hope and Huck shared what played like a moment of as close to forgiveness as they were going to come. “I’m proud of you,” said Huck, acknowledging that that might not be worth much, all things considered. At the last moment, Silas decided to stay behind. He was going to help Huck and Dennis, who clearly had become the sorta father he’d always wished he’d had. 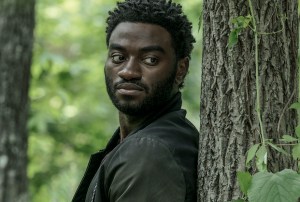 In the field, Felix just arrived to help Leo and two scientists change their flat — the rest had gone on in truck No. 2 — when the CRM showed up with Newton leading the charge. Soon, Will joined the shootout, and Felix decided to lure away his nemesis by running. The ploy worked, and ultimately, Felix found himself cornered in front of a gate behind which groaned a pack of walkers. (Why not?) “You said you’d kill me if you ever had your chance,” taunted Newton, “so come on.” Rather than fight Newton, Felix opened the gate and released the walkers. Only after Newton was tuckered out did they actually go at it, with Felix ultimately spearing his opponent and getting away unscathed (as the walkers were too drawn to the dead man’s intestines to care about him anymore… apparently). Back at the culling facility, the kids all said so long to Silas, although Elton sweetly noted, “I don’t think this is goodbye.” Yeah, it’s not like Silas had been shot in the head like poor Percy! As Jadis received intel that tipped her off that the gas was in danger, Huck discovered that when the CRM jammed the walkies, it had also screwed up the detonators. So she sent Dennis and Silas to the emergency weapons cache to retrieve her a timer. Or so she said. 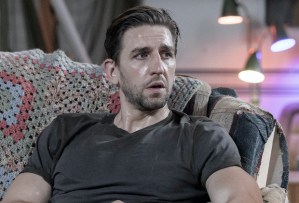 ‘NO MATTER WHAT THEY TELL YOU, YOU’RE NOT ONE OF THEM’ | When Jadis landed at the culling facility with the CRM, she engaged in a confounding battle with Huck. Why confounding? Because in the middle of it, Huck threw the erstwhile Anne a spare weapon. Dubious strategy, that. Huck seemed to think that she could defeat her frenemy with insults. “This was always who you were,” she spat at Jadis. “You traded someone to get into the CR, right?” True, Jadis admitted. She’d had someone special — an A. (Rick shoutout!) But she’d said that he was a B so he wouldn’t end up in Elizabeth’s lab. Huck was just as bad, though, Jadis insisted. Maybe worse. Her intel had helped the CRM take out the Campus Colony in one fell swoop. Finally, their argument/brawl ended with Jadis fatally stabbing Huck with her free hand. Only then did Jennifer reveal that she’d used her pop’s watch as a timer. Jadis was seconds away from being reduced to smithereens. (Thankfully, she escaped with the CRM before the blast; I know Jadis has been written in a challenging manner, but I love me some Pollyanna McIntosh.)

As the explosion reverberated throughout its surroundings, Dennis saw the plume of gas from the house in which the weapons were stashed and knew why Huck had sent him and Silas away. Hope, Iris and Elton were still too close to the blast to be safe, but hurrah! Indira and Asha arrived in the nick of time with gas masks. Only — d’oh! — Elton moved to protect Hope from a walker and got himself badly bitten. (Damn it, where’s his corduroy when he needs it?!) Back at the weapons cache, the CRM descended on Dennis and Silas, so the older guy told his surrogate son to shoot him. He wasn’t going to make it, anyway, Dennis said. He was bleeding like a box of wine without a spigot. Silas should tell them that Dennis kidnapped him and he’d gotten the better of his captor. “Making them see you as a hero,” he said. “That’s how you live.” And in arguably the most poignant moment of the series, Silas tried to refuse but eventually did as he was told and shot his father figure. (Yes, I cried. Sue me.) 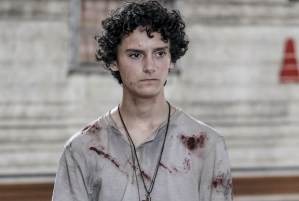 ‘WE ARE THE LAST LIGHT OF THE WORLD’ | At the scientists’ hideout, Elton’s arm was amputated, and though it was touch-and-go, as you’d expect, he pulled through. Turned out, he’d also swiped the medication that Indira needed to retain her pulse. (If that didn’t get him a kiss from Asha, I don’t know what would.) Iris soon left with a group from the Perimeter to blow the whistle on the CRM in Portland. “All this, it didn’t change us,” she told Hope as she left. “It just showed us that who we are is who we were.” With that, they flicked each other the bird in a weirdly sweet throwback to days long gone. Then, as Elton voiceover’d a flash-forward, we saw Iris and her contingent arrive on the outskirts of Portland, we glimpsed Felix and Will’s happily ever after (they’d even adopted a dog!), we were shown Hope’s progress as the Doogie Howser of the post-apocalypse, and we saw Silas’ new life as a CRM soldier. No surprise, that, given that despite the fact that Jadis had known he was spinning the yarn Dennis had instructed him to, she’d taken a shine to him. “I can’t wait,” she said, “for you to see who you’re gonna become.” (Yeah, Pollyanna McIntosh could sell matches to someone who was on fire.) 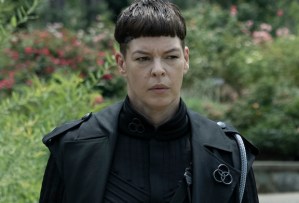 In the city, Jadis approached Elizabeth, at first it seemed to offer her condolences over Huck. But as the lieutenant colonel began going on about how she’d done monstrous things for a civilization that she’d come to realize might never bounce back, Jadis laid her cards on the table. “Survivors find opportunity in calamity,” she observed. “They don’t break. They don’t let the weak become strong. They wait for the strong to become weak.” That’s what she had done. She’d seen the strongest person she’d ever met be rendered vulnerable, and she’d used it. (Yeah, I’m calling it; if Rick doesn’t turn out to be Beale, I’ll eat Judith’s hat.) “That’s what I’m doing now,” Jadis added — by having Elizabeth arrested for treason. The conniver guessed that the older woman had brought her in to be her fall guy, but with no friends, no kid, just ambition, Elizabeth had picked the wrong patsy. “Bill’s gonna have your head for this,” hissed Elizabeth. “Who do you think signed your arrest warrant?” shot back Jadis. (Yeah, Bill/Beale is totally Rick, right?) 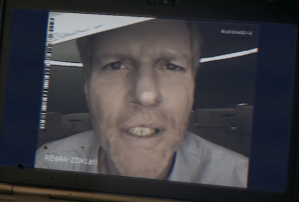 ‘THE DAY WILL COME WHEN WE ARE GOING TO BEAT THIS THING’ | Then, in the denouement following the closing credits, a woman stole into a dilapidated old lab and began copying files to a laptop. In one video that she watched, none other than Dr. Edwin Jenner from Season 1 of The Walking Dead was seen talking about the need for fresher “samples.” At first, he didn’t have much to say that seemed super significant, but nonetheless, she wanted to obtain his notes — and the man who came in after her did not want her to get them. Speaking French, he asked if she was one of the doctors? Oui. Was she a member of the Primrose team? No, Violet. Did she know where the Primrose team was? No, they hadn’t been here when “you all did what did,” they’d been at a conference in Ohio. She’d grown tired of hiding and had hoped they’d be at the lab when she returned. “They should be dead,” the man grumbled, adding, “We won’t jail them like the others, we’ll kill them.” And he scoffed at her hope that they might “end this.” “You started this,” he sneered even though technically we couldn’t see him sneer. “All the teams. Then you made it worse.” With that, he shot her and left, at which point she almost immediately reanimated and hurled herself with startling speed and strength at the doors of the French lab. So it would seem that there’s a new strain of mega-walkers that resulted from the scientists’ experiments!

So, what did you think of the finale of World Beyond? Grade it in the poll below, then hit the comments with your theories: Is Rick Major General Beale? Is this really the end of the story? I think not.