THE SHOW | Prime Video’s The Wheel of Time

THE PERFORMANCE | Coming off of the brutal attack by Logain’s army, The Wheel of Time this week chronicled Stepin’s mourning of his Aes Sedai, Kerene — as witnessed and absorbed by Henney’s Lan Mandragoran. As it did so, Lan (and we) came to appreciate the unique and impregnable bond between, specifically, him and Moiraine.

Henney’s performance for much of the episode was wordless yet incredibly moving, starting with how Lan gradually turned his head to regard Moiraine as Stepin laid Kerene to rest. (“Warders are not supposed to outlive their Aes Sedai…,” he would note after, riding beside his own.)

Arriving in Tar Valon, Lan was there for Stepin (a fine Peter Franzén) as his peer recalled how he became Kereen’s unlikely warder, then as he melted the ring that symbolized their bond. After, Lan visited Moiraine in her chambers — to simply kneel at her side and hold her arm, and then her hand. Conveying both loyalty and a fondness just with a look, Henney let us know that the loss Stepin is feeling is one that Lan dreads ever experiencing himself.

In a brief, lighter sequence, Lan found himself teased by Stepin, with regard to how Nynaeve touched the One Power for the first time in order to save the life of her new acquaintance. Has she fallen for Lan, Stepin wondered? “That’s a bad idea for her,” Lan scoffed. Stepin posited that life without love would be intolerable, but Lan maintained, “I can tolerate a lot.” (Meaning, he is resistant to any love? Or knows who has already claimed his?)

Hours later, Lan awakened to realize Stepin had drugged his drink, so as to slip away and take his life. Finding his dead friend in the hall dedicated to fallen warders, Lan could only slump to his knees and rest his head on his shoulder.

What followed was the hour’s most impactful scene. With warders and Aes Sedai all clad in white for Stepin’s funeral, Lan kneeled beside his fallen friend, as some, and gradually all, rhythmically thumped their breasts with their fists. Here, Henney and leading lady Rosamund Pike accomplish so, so much with just traded looks. Because of Henney’s performance, you know that Lan feels the weight/almost burden of his bond with Moiraine — to a degree that, coupled with his grieving for Stepin, he can’t help but let loose with a series of anguished wails, all as Henney clearly pounded his own chest red in the moment. 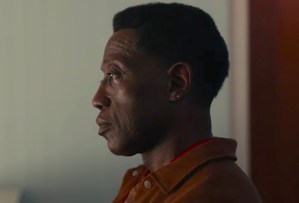 HONORABLE MENTION | Wesley Snipes brought gravitas and believability to every episode of Netflix’s True Story, from the portrayer’s sigh-laden and twitchy-eyed acceptance that everyone in Kid’s inner circle looked at Carlton as a loser, to his duplicitous stoicism while pretending to protect his younger brother when, in actuality, he was setting him up for a long con. But nothing captured Snipes’ next-level emoting like the moment when Kid confronted Carlton about Simone within a cushy suite at a Sixers game. Snipes’ Carlton was smugly snacking on chips when Kid dropped his word bomb, and suddenly the synapses between the older brother’s brain, hand and mouth broke down. Carlton just couldn’t get that last chip in his mouth as his fight-or-flight instincts made his hands tremble and his lips contort in what can only be described as 2021’s most masterful small-screen microexpression. Once Snipes steadied Carlton’s fingers, he silently ate his chip and awaited an inevitable damnation. 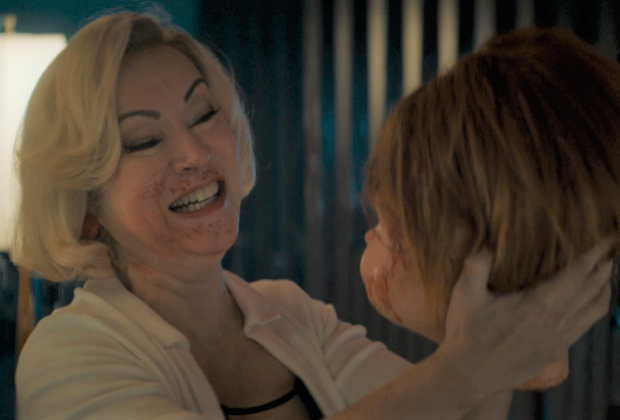 HONORABLE MENTION | Chucky‘s Tiffany is a lovable lunatic who relishes in horror, comedy and steamy seduction — all of which Jennifer Tilly delivers with panache (while seemingly having the time of her life in the process). In the Syfy/USA series’ Season 1 finale, Tiff played a key component in helping the killer doll carry out his diabolical plan: to create an army of dolls that would terrorize the entire country. Tilly elevated every scene she was in with her high-pitched shrieks and perfectly timed delivery, turning heel from sweet and vulnerable to manically evil and unstable. The actress knew exactly when to chew that scenery — entirely appropriate for the campy tale being told! — and when to unleash the character’s inherent brutality. Chucky may be the one headlining this marquee, but it was Tilly’s contagious energy that leapt off the screen and had us jonesing for more. 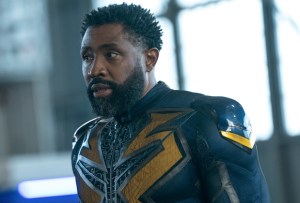 HONORABLE MENTION | When Cress Williams was announced as part of The Flash‘s “Armageddon” event, we looked forward to a reunion of electrified superfriends. What we didn’t count on was one of Williams’ best performances as Jefferson Pierce. As Barry begged his ally to power him down, we felt the conflict within Jefferson. And when Jefferson related how “best friend, brother” Bill Henderson gave his life so that the Pierces wouldn’t lose their patriarch, wow, that Black Lightning death rocked us anew. Then, when it became clear Barry downplayed the Despero of it all? Williams showed us how irked Jefferson was, lightly growling, “You’re keeping something important from me. I suggest you remedy that.” Triggered, Barry fought his friend, but Jefferson managed to calm the speedster with a mantra from his own childhood: “Whose life is this? Mine. What are you gonna do with it? Live it by any means necessary.” With that, Barry was motivated to solve his future, not abort it.