Harlem, which premieres this Friday on Prime Video, follows four dynamic friends navigating the different triumphs and challenges in their personal and professional lives while residing in the historically Black neighborhood.

It’s a personal story for series creator Tracy Oliver, who also wrote Girls Trip and serves as showrunner/executive producer on First Wives Club, because she got to write about her own experiences this time around.

“[With] First Wives Club or Girls Trip, I was kind of channeling, because I’m not in my 40s,” Oliver tells TVLine. “I’m not married, and I don’t have kids, so a lot of the issues that those characters were dealing with, I just had to observe and channel it into the writing.

“But this one is like, ‘Oh, these are my current experiences. I don’t have to research it. I’m living it,'” she adds. “That ended up being more personal and authentic to my own life.”

The core of the dramedy, which releases all 10 episodes this Friday, is the friendship between its main ensemble, which is made up of Camille (played by Meagan Good), a social media savvy professor of anthropology; Tye (Jerrie Johnson), a tech entrepreneur and proud masc lesbian; Quinn (Grace Byers), a struggling fashion designer who comes from an affluent family; and Angie (Shoniqua Shandai), a vivacious and gifted singer searching for her big break. 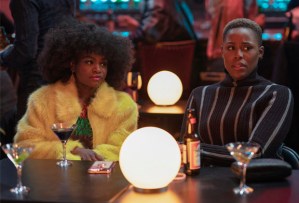 With a bevy of shows available right now that put Black women friendships front and center — including Insecure and Run the World — Harlem finds its unique identity in the characters that make up the story.

“The thing that I love most about [Harlem] is… some of the shows that I’ve watched over the years, I relate to as a Black woman, but I don’t actually see myself,” Good explains. “And sometimes, I didn’t necessarily see my friend group, like where I grew up and some of the conversations that we were having. So when I read Harlem, I was like, ‘Oh my God. There’s so much of me in Camille.’ There’s so much I could see in each character, not just myself, but my friend group.”

Similarly, Johnson is excited to play Tye because she didn’t get to someone like her growing up. “As a queer woman, I loved watching Living Single and Girlfriends and I didn’t quite see that character,” the Good Trouble alum explains. “Lynn (played on Girlfriends by Persia White) was a bisexual woman. But a masculine-performing, androgynous queer lesbian who is a boss in this friend group of other bosses, who is doing what she wants to do, and who is so business oriented…? This character has not existed on television.”

“It’s great company to be in,” adds Tyler Lepley, who plays Ian, Camille’s ex-boyfriend and a successful chef. “One thing that sets Harlem apart from these shows is it shows the juxtaposition of who we are as Black people. We know how strong we can be, but we’re also vulnerable at times. It’s just refreshing to see a full spectrum of who we are.”