In a world filled with dark cynicism, ABC’s The Wonder Years offers comfort and nourishing optimism.

That especially rang true in Wednesday’s episode, which saw Dean’s older brother Bruce (played by All American’s Spence Moore II) return home just in time for Christmas. After serving two years in Vietnam, the matured veteran received a warm homecoming from his family — as well as a nice home-cooked meal.

It’s an unfortunate truth that many vets struggle with assimilating back into regular life, and Dean worried his brother would be one of them. To ensure that his brother was on the straight and narrow, Dean volunteered to go along with Bruce to run errands despite that being the bane of his existence.

Dean’s suspicions increased when they wound up at what he described as a “shady house in a sketchy neighborhood.” It didn’t help that Bruce didn’t tell anyone where they were going, and had ordered Dean to wait in the car. After growing tired of waiting, Dean went after his brother to see what had been keeping him for so long. But Bruce wasn’t doing drugs; he was returning his dead friend’s belonging to the fallen soldier’s grieving parents. 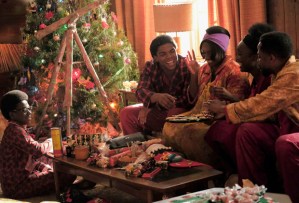 During a trip to the hardware store (unbeknownst to Bruce, to buy rope for Dean to “tie up Santa”) Bruce received a tip about a job as a bank teller. It seemed like a great opportunity… until it wasn’t. Despite risking his life for his country in the trenches of war, serving overseas still couldn’t protect him from racism at home. The interviewer’s idea of “helping a fellow vet” was to offer him a job as a janitor, which Bruce promptly rejected. It turns out the teller jobs were only reserved for white veterans.

Bruce feigned optimism about his options for work before delivering the sobering news: he was headed back to Vietnam. In America, he was only seen as a janitor. But overseas, he could be a respected leader. Understandably, the rest of the family wasn’t happy with Bruce’s decision. Dean even staged a sit-in at the recruitment office, which went nowhere. He relented when Bruce explained that part of his reason for returning to the Army was to make sure his friends could make it back home safely to see their kid brothers.

The episode’s remaining moments were a lovely celebration. Bruce and Dean stargazed and bonded on the rooftop and even slept in the treehouse despite freezing from the cold winter air. The family exchanged thoughtful gifts — giving Bruce presents that could only be used at home because they were confident he’d return — and filled the air with warm laughter. We don’t find out what happened to him when he went back overseas, but I suppose that’s a story for another day.

What did you all think of this week’s episode of The Wonder Years? Were you relieved to see it end on such a happy note?