This week on Disney+’s Hawkeye, light was shed on Clint and Kate’s captor, ahead of a rousing car chase and the fwip!ing of one of the MCU’s sickest trick arrows ever.

Episode 3 of the six-episode series opened with a flashback to the early childhood of Maya Lopez (aka Echo), the Tracksuit bigwig whose goons now have Clint and Kate mortifyingly strapped to playground rockers. As a tyke born deaf, Maya had to attend regular school because her father William (played by Fargo‘s Zahn McClarnon) couldn’t afford specialized education. William spoke of how Maya would forever have to “jump between two worlds,” that of the deaf and the hearing. As such, Maya grew up learning to pay extra-close attention to things, including her beefy karate classmate’s weak spots. (After said class, William told his daughter that her “uncle” would take her home, as an unseen figure adoringly touched the lass’ cheek….)

Flash-forward some years, and we see Maya as a young adult witnessing Ronin’s storming of the Tracksuits’ hideout — and his eventual inflicting of what would be a fatal wound on her father. Ergo her beef with Ronin, or at least whoever has been running around in his suit. Cut to the present, and Clint is confronted by his captor, who takes notice of his hearing aid but is frankly disappointed to see he lacks the ability to properly communicate via ASL. With Maya’s cohort Kazi serving as interpreter, Clint and Maya have some words, at least until he has been able to wear down the duct tape binding his hands and break free. A foot chase through the loft ensues, with Clint pulling off some nice acrobatics until he can grab a bow ad sail an arrow through Kate’s own duct tape. She then ably joins in the fight, nearly besting Kazi, after which she and Clint appropriate a sedan outside and get motoring. 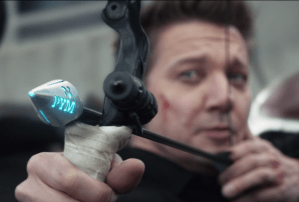 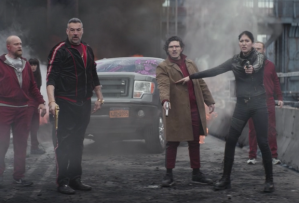 What follows is a seven-minute car chase which Kate spends much of dangling out the passenger window, grabbing random arrows of Clint’s as he drives (sometimes, backwards). The joy here is seeing (and see Kate see) the effects of each trick arrow, ranging from bubbling goop that gunks up a windshield to impressive explosives to one that manages to strap a dozen or so Christmas trees to the baddies’ car.

The car chase climaxes on a bridge, where Clint parks their car across all lanes and he and Kate prepare to confront the arriving bad guys. He hands Kate a seemingly ordinary arrow to “shoot high,” so that it comes down on the approaching van. Clint then grabs a Pym-branded arrow, and… you get goosebumps just imaging what comes next. And sure enough, Clint aims his arrow to hit Kate’s and “embiggen” it to, like, telephone pole size (if not larger), and it comes crashing down on the van.

Alas, amidst this sprawling clash with the Tracksuits, Clint’s hearing aid got smacked free at one point, and Maya defiantly crushed it with her foot. As such, there was a breakdown in communication between him and Kate in the scenes that followed, where they (sweetly but separately) expressed concern about Pizza Dog needing a walk. After getting the hearing aid fixed at a local shop, Clint filled in Kate some on the Tracksuits’ past, hinting at the “uncle” of Maya’s who is the true (ahem) kingpin of the criminal enterprise. Clint worried about what other souvenir from the Avengers compound Maya’s peeps were clearly after at the auction, but Kate is fixated on stepdad-to-be Jack Duquesne’s apparently illicit doings. At Eleanor’s apartment (the palatial nature of which astonishes Clint), Kate logs onto the Bishop Security database to do some snooping on Kazi (who has ties to something called Sloan Limited), while Clint touts the place… until Ronin’s blade is thrust up against his throat, held by the aforementioned Jack!

What did you think of Hawkeye Episode 3, titled “Echoes”? And is Maya’s “uncle” indeed who we think/know he is?