Money Heist fans who count Berlin among their favorite characters are in for a treat. Netflix announced the Bella Ciao bandit is getting his own spinoff.

Titled Berlin: A New Series, the drama will premiere in 2023 and star Pedro Alonso, whose alter ego died in Season 2 but appeared in subsequent seasons via flashbacks. No word yet on if the upcoming show will be a prequel, but more than likely it will given the circumstances of his death and his terminal illness.

Money Heist comes to an end this Friday with the second half of its fifth and final season.

“I’m so happy about it,” Alonso said of the spinoff, after it was announced at a fan event celebrating the final five installments of Money Heist. “I am deeply grateful to be able to connect with people all over the world and receive so much love and such a memorable time. We started this series walking into the unknown and we have been winning ever since. You fans are our accomplices and thank you for that.”

Alonso, whose character turned out to be the Professor’s cynical and more criminally experienced older brother, said he feels it is his duty and honor to make Berlin a drama Money Heist fans will love as much as the original. 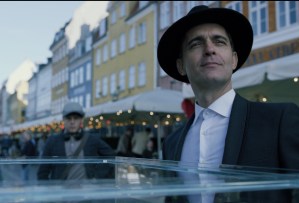 In Season 5, viewers also learned that Berlin has a son named Rafael, who is versed in cyber security and electrical engineering. What role he’ll play in the spinoff, if any, also remains to be seen.

“Responsibility can be something that weighs on you,” Alonso added. “It can be a prison. But in the case of this show, it has been a wonderful opportunity and real cosmic magic. This team has gone above and beyond for five years and I am sending them all kisses. It is really amazing this feeling knowing that people all over the world have favorite characters and favorite quotes. This is demanding work but it is worth it because of the fans.”

Are you going to tune into the Money Heist spinoff Berlin: A New Series when it premieres in 2023? Why or why not? Drop your thoughts in the comments.