Piles of dead bodies, fountains of blood and an actual army of Chucky dolls? Yeah, it’s been a wild season.

In Tuesday’s season finale of Chucky, worlds collided as Andy and Kyle landed in Hackensack to help Jake and co. deal with their deadly doll situation. As Tiffany and Nica/Chucky moved full steam ahead with their plan to unleash swarms of killer dolls all over the country, the Good Guys (pun intended) headed to the mayor’s banquet to try and stop the impending death and destruction.

So who lived, and more importantly, who didn’t? Read on for a full recap of “An Affair to Dismember.”

Andy shows up to the Wheeler mansion looking for Jake and asking all sorts of odd questions. He warns Junior to stay away from the doll, and when he takes off, Chucky crawls out of the toilet bowl. Junior asks why he didn’t kill him then and there, but Chucky says he has “other plans” for Andy.

Lexy and Jake wonder why Chucky is so intent on getting one of them to commit a murder, but their brainstorm is swiftly interrupted by one of the Chuckys. Before the doll can attack, Kyle storms in and shoots him dead. She explains that, yes, there are multiple Chuckys, but he can only perform his soul-swapping voodoo on other Good Guy dolls (and Nica, of course, but don’t ask me to explain that). Kyle also says that if Chucky can get one of the kids to kill, then he can create his army. Jake tells her they have to save Devon, but to keep them safe, Kyle drugs them and they pass out. 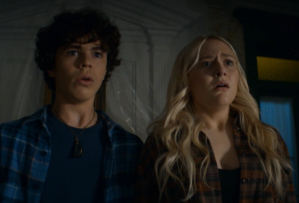 Over at the Charles Lee Ray house, Nica/Chucky tackles Tiffany to the ground and threatens to kill her. Tiffany screams that he needs her or “the plan won’t work,” but before Nica/Chucky can act on his/her killer instinct, Junior and his Chucky doll interrupt. (Tiffany’s reunion with the doll is equal parts adorable, hilarious and creepy af. I loved it.) The group continues downstairs, where dozens of dolls are stored, and they’re all alive. Chucky forbids his army to kill anyone under the age of “five or six,” and the psychopaths explode into a cacophony of maniacal laughter.

The doll orders Tiffany and Junior to kill Nica/Chucky (yes, this is all very confusing), but when they refuse, Tiffany decapitates him. (Who knew dolls could bleed that much?) When Junior approaches Tiffany with a knife, she tells him he’s going to need her to escape town once they find his dad’s body.

We learn via flashback that Tiffany was actually the one who originally called the cops on Charles in the ’80s. She’s, therefore, the reason this all began. After she shares her story, Tiffany drugs Nica/Chucky and rolls out a cute little suitcase that “her darling Glenda” gave to her. (Look alive, Seed of Chucky fans!) She opens the case, which is filled with wires, and says it’s “a little something to welcome Andy Barclay with a bang!”

Tiff and Junior take off (with one doll in tow), but before the headless Chucky can brutalize Devon, Andy arrives to save the day. Kyle shows up, too, but when she opens the front door, it triggers the bomb, and the entire house goes BOOM!

When Jake and Lexy wake up, they learn that Charles’ house exploded, so naturally, they assume Devon is dead. Jake mourns a bit, but it’s cool, ’cause Devon shows up shortly after. They deduce that the villains are heading to the mayor’s banquet, and they’ve got to stop the army.

At the ceremony, Jennifer Tilly is the celebrity guest, and she’s brought a truckload of Chucky dolls to give away to needful children across the country. While the mayor and “Jennifer” (who is really Tiffany) talk to the crowd, Junior lures Lexy inside pretending to be held captive. The teen soon reveals himself to be the villainous jerkface that he is, and as the entire town watches a charity screening of Frankenstein, Junior and the doll try to convince Lexy to join them. After a heartfelt chat, Junior rushes past Lexy and stabs the doll in the chest, but Chucky also plunges a knife into the teen. That’s what you get for killing your own dad, JUNIOR. 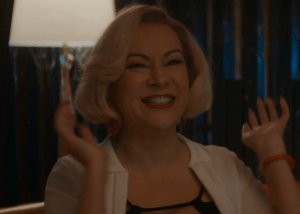 Meanwhile, Lexy’s dad Nathan is murdered in his theater seat by one of the Chucky dolls. As the theater breaks out into a panic, bodies quickly start dropping. Jake and Devon arrive to the scene, and while Devon escorts Lexy’s sister out, Chucky relishes in the fact that Hackensack will remembered as “ground zero for the army of me.” After the doll taunts Jake about his sexuality, Jake pins him to the ground, then slams him against the wall. He chokes Chucky until his eyes pop out and he falls down dead.

Outside, Tiffany preps the truck of dolls for the airport, but Andy knocks out the driver and hops behind the wheel. As he drives off, he gives a screaming Tiffany the middle finger. Before he can get too far, Tiffany — the doll version — holds him at gunpoint from the back of the truck! She tells him to drive if he knows what’s good for him.

The human version of Tiffany, meanwhile, still has Nica tied to a chair, only the lovable lunatic did something unfathomable: She amputated Nica’s forearms and legs! The last we see of Nica, she’s screaming at the top of her lungs in horror.

The next day, Jake, Devon and Lexy visit Logan, Junior and Bree’s graves. Jake thanks his friends for saving his life, and as they hug it out, a mysterious person wearing a black glove stalks them from behind a tree.

In an epilogue, Chucky sits by a fire with a book, regaling us with a recap of the season’s kills, all 21 of ’em (including one cat, but he thankfully saves those details for our imaginations). But what happened to Kyle, and what’s to come for Andy and Nica? That’ll have to wait for Season 2.

So what did you think of Chucky‘s explosive finish? Grade the finale (and season) below, then sound off in the Comments!