Warning: This post contains True Story spoilers. Proceed at your own risk.

Netflix’s hit limited series True Story does a great job unpacking the rivalrous and damaged relationship between two very different brothers as they attempt to cover up a murder or two.

But when it comes to women, let’s just say there is a dearth of variety.

The most fully realized woman on the show is Billie, played by Space Force‘s Tawny Newsome. She writes jokes for Kid (Kevin Hart), but he takes her for granted until almost losing her to Will Ferrell. Billie also has a clandestine romantic relationship with Kid’s bodyguard, Herschel, and their boss doesn’t approve. Unfortunately, Kid’s dissatisfaction with their coupling is never truly explained.

The other women on the drama are either groupies Carlton (Wesley Snipes) introduces, including Daphne/Simone, who Kid thought died of an overdose, but didn’t; Kid’s soon-to-be ex-wife, Monyca; or Andrea, the hotel employee Kid sexually seduces. 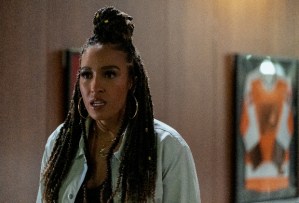 Although the series fails the Bechdel test, because two women are never shown talking to one another about … well anything, Culpepper argues True Story gets other things right.

“It doesn’t pass the Bechdel test, but it does pass the DuVernay test,” Culpepper tells TVLine, referring to filmmaker Ava DuVernay’s push to hire more women directors in the industry. “As a director, I look for all kinds of stories, and I was drawn to this one because of the way it looks at brothers.”

Culpepper, who is the eldest of five, explains how True Story‘s fraternal discord intrigued her as a storyteller, as did getting to know Billie.

“These two have conflicts and full-on lives and stories,” Culpepper says of Hart and Snipes’ characters. “And neither brother fits into a stereotype. To me, Billie represents women well, because she’s smart and thoughtful, and there is a point where she forces Kid to appreciate all that she brought to the table, and how she made his success possible. In that way, she is a catalyst for his growth.” 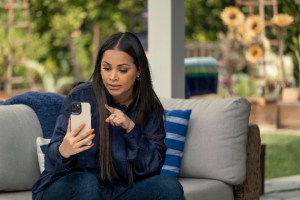 Kid’s estranged wife Monyca (played by Lauren London, The Game) also has a self-reflecting effect on him, Culpepper contends.

“Other than that? Yeah,” Culpepper says, ever-so slightly chagrined. “But, to be fair, this is a narrative about two Black men, and we don’t get to see them in these kinds of stories very much either. In that way, True Story fulfilled my need to tell stories about people with full lives and good attributes and bad — and that includes these two Black men.”

What did you think of the way True Story portrayed women? Drop your thoughts in the comments.