The CW this Sunday night commemorated the 50th anniversary of The Homecoming: A Christmas Story — the 1971 TV-movie that wound up siring The Waltons — with a remake. But did it evoke enough folksy charm?

As with the source material, and set in 1933, The CW’s The Waltons’ Homecoming found the titular family readying for Christmas but also waiting… and waiting… for patriarch John Sr. (played by Ben Lawson) to come home for the holiday from his far-away job. (John’s already long bus ride was further slowed by a brewing snow storm, and is eventually derailed when the bus skids off an icy road.) 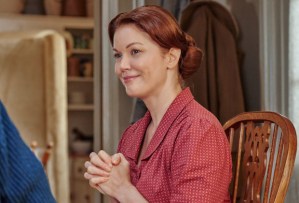 Along the way, we meet family matriarch Olivia (Scandal‘s Bellamy Young), eldest child John-Boy (Logan Shroyer aka This Is Us‘ Teenage Kevin) and eldest daughter Mary Ellen (Marcelle LeBlanc). There’s also a Jason, an Elizabeth, an Erin and a Jim Bob, but Ben got snipped from this remake. You also have Grandma and Grandpa, a Mr. Godsey running the general store, some nicely cast Baldwin sisters (gotta love Papa’s Recipe!), and minister’s wife Rose (Jacinte Blankenship), who invites Livy & Co. to their nearby Baptist church for Christmas Eve services.

Oh, and succeeding Waltons creator Earl Hamner Jr. as narrator is none other than the OG John-Boy himself, Richard Thomas! 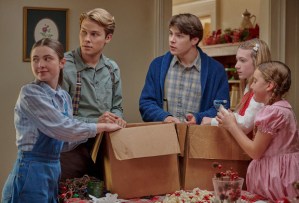 All told, the production seemed a bit too “clean” for this Depression Era tale, with the Walton kids looking like they were sporting brand new J. Crew purchases. There were some modern “updates” — dungarees-wearing Mary Ellen says “ass” at one point, and repeatedly advocates for less gender-defined roles in society. And while she registers as feisty and John-Boy is clearly Wannabe Writer, none of the other kids is given a single character trait, unless you count Erin’s Hollywood dreams.

There’s also an oddly dark moment when John-Boy unwittingly gifts Elizabeth with a “dead doll,” and some seriously janky green screen in all of the driving scenes. (Like, someone legitimately made a mistake with the frame rates, and no one fixed it.) As with many a modern “period” project, everyone speaks a bit too contemporarily, and at one point Olivia is asked if she has heard from John yet. Well, he is on a bus, it’s 1933, and the telephone nearest the house is probably at the general store. So… how would that happen?

A radio report drums up some drama, suggesting that John was injured (or worse) in the bus accident, so Liv sends John-Boy out into the inconsistently treacherous storm to find his father and (hopefully) return with him in time for Christmas Eve at church. You can see where this is going, but the eventual reveal to Olivia, during a candlelit singing of “Silent Night,” is effectively emotional. That, followed by John playing Santa with many thoughtful gifts, made my Grinchy heart grow at least one size. (That said, the closing “Present Day” graveyard scene fell flat.)

But what did you think about this Waltons movie remake?