In a perfect world, Zac would’ve listened to that recording of Fatima talking smack about him on Tyler Perry’s Sistas and asked her about it. But that’s not what happened, unfortunately.

Instead, Zac resorted to his childish ways on Wednesday’s installment of the BET drama and walked into Fatima’s apartment with mucho attitude. Fatima was cooking dinner for Zac, but he clearly wasn’t paying attention and instead set out to hurt this good woman’s feelings.

When Fatima asked him how his chat with Karen went, Zac lied and said he and Karen professed their love for each other, had sex, and were getting back together. A disappointed Fatima told Zac this was unfortunate but not surprising, and his bag of belongings was already packed and by the door.

The two cursed at each other and said horribly hurtful words, and Zac left. He checked into a hotel, where he ran into Andi just as she was leaving Robin’s room. Andi and Robin didn’t get intimate, but they, too, had choice words.

Andi called herself “a mess,” and Robin said she was the opposite. He called her a woman who knows what she wants and said Gary didn’t deserve her love. She asked Robin not to talk about Gary, and Robin agreed. He said he was going back to London, but that when Andi finally left Gary alone, she should give him a call. 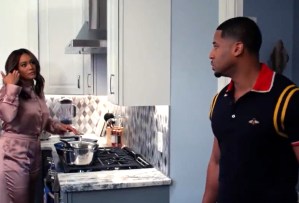 Back to Zac, who walked into his hotel room and wasn’t there five minutes before he got a call from his financial planner from the bank, informing him that his investment was doing so well that now he is a millionaire. Zac did the happiest of happy dances, and you could totally tell he wanted to call Fatima and tell her the good news, but he didn’t.

In fact, he called Fatima before he got the good news but hung up upon hearing her voicemail message. Oh, Zac! Call Fatima and kiss and make up already. If you tell her what happened, she could explain the recording came from Hayden and the whole thing was a part of a prank because her creepy coworker has been listening in on her calls.

Patience and compassion sure seemed to work for Aaron and Karen when he talked to her about why she hasn’t been able to move past Zac. Karen told the preacher she needed to hear Zac tell her he didn’t want to be with her and mean it, and Aaron asked Karen why she needed that. 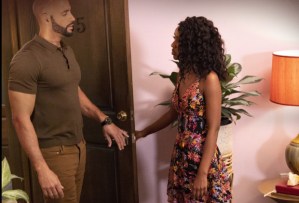 Poor Karen said she didn’t know why but added that she really is trying to move past her ex. When Karen called herself silly for being stuck on Zac, Aaron consoled her and said she wasn’t silly, she was just working through her emotions.

Meanwhile, Andi met with Fatima for drinks, and she told her about almost hooking up with Robin. And then Fatima told her girl Andi about her Zac woes and then she realized — after Andi said Zac was staying at the hotel solo — that Zac had somehow heard a recording of her prank call, and she rushed to his room to defend herself.

After a lot of yelling and cajoling, Fatima got Zac to open the door to hear her out. She called her girl to verify her claims about Hayden, which her friend did, and Zac apologized for jumping to conclusions. The two kissed and made up, but Andi and Gary weren’t so lucky. As soon as Gary saw that Andi’s underwear were on backward, their trainwreck of a relationship was finally over — or at least, we hope so.

Are you glad ‘Zatima’ worked through their troubles, and are you pleased they’re staying together? What about Andi and Gary? Do you think their messy love is a wrap at last? Drop your thoughts in the comments.