There are a lot of meta moments in Netflix’s new limited series True Story.

Things come to a head when Kid returns to his native Philadelphia for his comedy tour and has to confront Carlton about the restaurant he launched and lost, right along with Kid’s investment dollars.

But Kid only has so much time to focus on Carlton. He’s going through a very public divorce, he rarely sees his only son and his blockbuster superhero movie means the studio will want a sequel and fast. To his detriment, Kid takes his team — comedy writer Billie, doting manager Todd and dedicated bodyguard Herschel — for granted. (More on that later.)

Kid’s only real solace is his comedy show, and luckily for him, his first hometown performance is a sold-out success. Carlton, who lies and says he didn’t see Kid’s hit flick, takes his younger brother out on the town to celebrate with old friends from their neighborhood. These same friends are the ones who reveal Carlton not only saw the movie, but laughed at it the hardest. 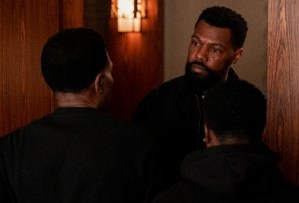 The friends and Carlton also convince Kid to send Herschel packing because they didn’t like being chaperoned, and that’s when the trouble begins. If Kid had kept Herschel around and not started drinking again, despite the unsavory influence of his brother and friends, he would not have drunkenly taken that groupie back to his hotel room.

The groupie overdoses and doesn’t wake up after a night with Kid — because she’s dead. Carlton springs into action, as if on cue, and quickly devises a plan to bring in a Greek gangster named Ari (Billy Zane!), who will help them dispose of the body.

Ari’s services come with a fee, of course, and after he gets rid of the body, he tells Kid he wants $6 million in hush money. Making matters worse, he starts talking to Kid in a demeaning way and flippantly comments as though Kid didn’t work hard for every dollar he has. 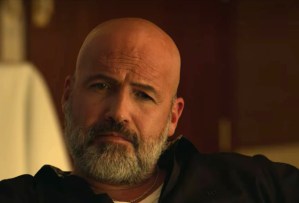 That’s when Kid snaps and chokes Ari with a phone charging cord, the same cord he borrowed from a racially insensitive fan on his flight to Philly. That’s symbolic, huh?

Although Kid is smaller than Ari, he’s also angrier and pulls and pulls with all his might until Ari is dead. Now there’s another body to dispose of, and Carlton will have to help again.

What did you think of the premiere? Grade it in our poll, and drop your thoughts in the comments.