Samuel “Screech” Powers’ former classmates gather at The Max to honor their late friend in the Season 2 premiere of Peacock’s Saved by the Bell revival.

The memorial doubles as a tribute to legacy cast member Dustin Diamond, who died in February of lung cancer; he was 44 years old. Though Screech was not seen during Season 1 of the sequel series, he was mentioned during the big homecoming episode, when Slater alluded to Screech having relocated to the International Space Station with his robot companion Kevin.

So how exactly does the revival acknowledge Diamond’s passing? Read on to find out…

Wednesday’s opener picks up a full year after the events of Season 1, as Bayside resumes in-person for the first time since the coronavirus forced the world into lockdown. After dropping Mac off at school, Zack asks Slater if he’s “going to the thing at The Max,” but Slater shrugs it off. He then proceeds to spend the next few days avoiding his feelings about the pandemic and the unspoken passing of his childhood friend — that is, until he no longer can.

While helping the current student body clean up the gym following the Last Year Dance — a formal meant to squeeze in every Bayside event that was waylaid by quarantine — Slater overhears Daisy talk about the year that she and her classmates lost due to COVID. 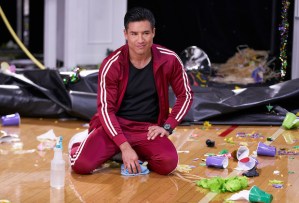 That’s when Slater realizes that his attempts to “pump the pain away” are misguided, and he can’t run from his feelings any longer. He accompanies Jessie to The Max, where they meet with Zack, Kelly and Lisa to memorialize Screech. Veteran owner Max introduces the gang to the newest item on the menu — Screech’s spaghetti burger, a nod to Screech’s spaghetti sauce from the OG Saved by the Bell — which is delivered to the table by none other than Kevin. Slater takes a bite, then gives his two cents: “It’s a little weird, but great,” he says, to which Lisa responds, “Kinda like Screech!” What follows is a stroll down memory lane, as the Bayside pals reminisce about their quirky friend.

Zack: Do you guys remember the time that he got struck by lightning and was psychic for a week?
Jessie: And then you used his powers to cheat on a midterm?
Zack: Yeah! Why didn’t we go to, like, Vegas? Or… stop the Gulf War?
[Awkward silence]
Lisa: Hey, you know, I was still mad that that little dweeb beat me at becoming Miss Bayside.
Kelly: Yeah, me too!
Jessie: He was so funny.
Slater: Yeah…
Zack: To Screech!

As the gang clink their burgers together in honor of Screech, a montage of classic Screech clips commences, to the tune of Mr. Belding singing “Miss Bayside.” At no point does the episode say the words “Screech died,” nor do we find out how Screech died. But his passing is obviously implied. 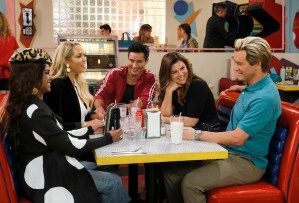 Executive producer Tracey Wigfield previously told our sister site Variety that “it would have been wrong to not acknowledge [Diamond’s death] in a real way and to not have our OG characters mourning this character that we’ll never get to see again.” Asked how important it was to get the tone just right, fellow EP Franco Bario — who has been with the SBTB franchise since its inception as Disney Channel’s Good Morning, Miss Bliss — told TVLine: “It was important for all of us — obviously the OG cast and myself, but it was important for Tracey — that this was tasteful, and that it was meaningful…. I think we all felt good about it.”

What did you think of Saved by the Bell‘s tribute to Diamond and his iconic character? Grade the Season 2 premiere via the following poll, then drop a comment with your full review.