And just like that, another iconic villain has arrived on Batwoman.

Wednesday’s midseason finale delivered a wild hour that saw the Bat Team track down Alice and Mary, who took on the Poison Ivy persona after being infected by one of Pam Isley’s vines. Batwoman offered Mary an antidote, and the newbie villainess declined because she didn’t want to be saved. In fact, she’s reveling in this new identity, which she believes to be her true self. Mary is a sidekick no more.

Meanwhile, Jada Jet’s attempt to cryofreeze her son as a way of stopping him from becoming the Joker failed. Midway through the freezing process, Marquis escaped, murdered a security guard with a fancy pen and confronted Ryan for betraying him by secretly working with Jada. After demanding and securing Ryan’s resignation as the CEO of Wayne Enterprises, Marquis publicly announced that he would be taking over. He also debuted a fresh new look: purple dreads, a fit orange suit and a diabolical smile.

With the Arrowverse series taking a short hiatus, TVLine hit up Nick Creegan, who plays Marquis, aka the new Joker, to discuss his take on the fan-favorite villain. Read our interview with the actor below.

TVLINE | When did you find out that you’d be playing the Joker?
I thought it was just [auditioning for] Marquis Jet, this sexy playboy who was arrogant and he gets everything he needs from his mother. Funny enough, I wore a purple shirt in my audition. Two weeks before I flew out to Vancouver [where Batwoman films], I had a FaceTime meeting with [showrunner] Caroline Dries, and she was like, ‘Hey, Nick… There’s really no other way to say this, but you become the new Joker.’ My face was frozen, and my jaw literally dropped. I was immediately shocked, excited, scared, intimidated. I had all of the feelings all at once. So I knew right before I flew out to Vancouver to start shooting. 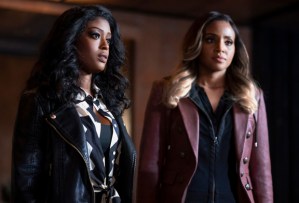 TVLINE | Did you think about previous iterations of the Joker while playing your version of the character?
Immediately, I thought about Joaquin Phoenix because that was the last version of the Joker I saw. Even though Joaquin Phoenix is legendary [and] won the Oscar for the role, the late Heath Ledger — everyone loved his rendition of the Joker as well… I realized that this is going to be the first of its own kind in a sense because there has never been a person of color to ever portray this role before, and I tried to approach everything with an individual spirit. So while I respect every Joker that has come before me, I wanted to make this very much an original piece of what I saw as this character. I use a lot of my own life experiences, loss of loved ones and things of that nature to inject the pain and hurt and misunderstanding of Marquis. Being that this is the show where there’s the first Black woman and lesbian superhero, I realized that I was going to be the first Black man to portray a role that kids will be able to dress up as Halloween one day. They’re going to be able to see his purple locks and say, ‘I want purple locks’ and ‘I want to dress up like Marquis and be the Joker.’ So I took it on as something that was brand new, even though I did think about the other Jokers. But I realized that this was the first of its kind.

TVLINE | How would you describe your take on the Joker?
Marquis has a way with his words. He’s very charismatic and charming. I think he draws people in with the way he’s able to speak to an audience. In Episode 7, you see that when he makes that speech at the end and poses certain questions that make you wonder, ‘Is he crazy? Or could I understand why somebody might feel the way he feels?’ In later episodes, people will definitely be able to relate to some of the things he’s saying. I don’t condone any harm on other human beings, but in terms of his philosophy on treating people with mental illness fairly and not just treating them like a pariah, I think people will be able to agree with that part. Marquis is one of the most complicated characters in the series. I feel like my rendition of him is pointed towards making people think more deeply about mental health and awareness, and how we treat people with mental health issues.

TVLINE | What has it been like for you to tackle mental health through this character?
I think the most eye-opening part is that we have so many people in our own lives that might not feel seen, or that might not feel like they have the ability to emote in a healthy way. Oftentimes men are told, ‘Don’t cry. That’s for a girl,’ or women are told to be more ladylike. In reality, we should be able to express ourselves in a healthy way from the beginning so that we never get to a point like Marquis Jet. With Marquis, the truth of the matter is he just never felt fully loved and understood by his family. He feels like an outcast. He’s always felt like he wasn’t enough for his mother, and he always felt like he didn’t really have anybody else to lean on.

The other part about it is he leans on the fact that this is not his fault. He didn’t ask for the Joker to zap him with a joy buzzer and change his brain makeup, so he doesn’t feel like he should be punished for being the way he is. I think that’s a metaphor for people in our own lives who are born with certain characteristics or disorders like schizophrenia or bipolar disorder, things of that nature that they didn’t ask for. We shouldn’t treat them like they’re second-class citizens. I think it just made me way more aware of the attention we give our loved ones and people who might have bad days and we write them off. I just feel like we need to be more empathetic to people who have certain types of illnesses. 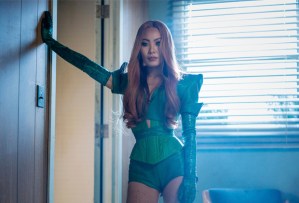 TVLINE | Anything you can tease about the journey ahead?
Fans have a lot to look forward to in terms of classic Joker memories. There are going to be certain situations, items, stories brought into the mix that the original Joker from the comic books has always had his hand on. Marquis will be tapping into certain things that will remind people of the original Joker. You can also look forward to him really giving the Bat Team a run for their money. The first episode after the midseason finale is going to be very intense and insane, and they’re going to get a full dose of what Marquis has to offer. By the time we get to the end of the season, I think certain people’s hair will go gray. It’s going to be a stressful season for people who love the good guys.

TVLINE | Both Mary and Marquis seem to have a similar point of view in terms of feeling underestimated and underappreciated. Did you find similarities between them as well?
First off, I’m so happy that Nicole Kang, who now plays Poison Ivy, has had this opportunity as well. She’s also the first Asian American woman to portray this role. She and I have been talking and supporting each other through this whole journey this season, and we’re just so excited for each other, so we have similarities. And then in the actual show, I do agree there’s a lot of overlap in the characteristics of both Mary and Marquis. Who knows? Maybe at some point, fans are going to be able to see these two in the same place at the same time.