There are sibling rivalries, and then there are times where interactions become so contentious, tiffs lead to fisticuffs.

This is what happens between Kevin Hart and Wesley Snipes‘ characters on the new Netflix limited series True Story. In the drama, which premieres this Wednesday, Hart plays Kid, a highly successful standup comedian who returns to his native Philadelphia for the first leg of his comedy tour.

While there, he spends time with his older brother Carlton (Snipes), a felonious type who has been mooching off Kid for years.

Without revealing too much, a series of unfortunate events occur, forcing Kid and Carlton to spend a lot of time together to make things right. The forced bonding doesn’t happen without strife, however, and at one point, the two throw hands.

“I remember being concerned,” Snipes, a fifth-degree black belt, divulges to TVLine, “because I didn’t want people to be distracted by this fight scene and automatically go back to my legacy as a martial arts guy. I wanted to stay in the moment and stay in the series, so I was a little reluctant to even do that scene. I thought it would be better without it.” 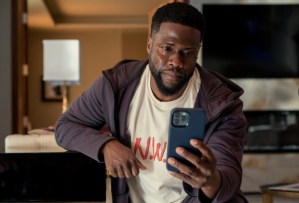 But series creator and writer Eric Newman says the heated brawl was a manifestation of escalating tension and frustration. As a result, Newman adds that he, Snipes, Hart, and director Hanelle M. Culpepper did everything they could make the fight look as organic as possible.

“To Wesley’s point, we ended up with a version where Kevin could stand a chance,” Newman reveals, adding that the cutaways were strategic. “Wesley’s character Carlton even says ‘stay down’ because that’s what would happen if they were really fighting. It was a very one-sided fight, and that was important to the truth.”

After all, as Newman explains, the Blade and The Expendables 3 vet wasn’t cast for his physicality but his acting chops.

“I’ve always wanted to work with Wesley,” Newman says. “In this case, I really needed him. Kevin reached out to me and said he was up to the challenge. After that, we needed to find somebody with real gravitas to play opposite him, someone Kevin could rise up to dramatically.” 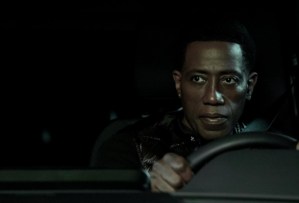 The end result is a True Story that fans of both actors won’t believe until they see it.

“If we hadn’t gotten Wesley, it would’ve just been some dude trying to make it work,” Newman shares. “I still can’t believe Wesley Snipes is on this show. He’s so good, and he raised the bar for everybody. Kevin and Wesley are both great and are doing things you really want to see them do.”

Snipes, in turn, says he is very proud of the work he and Hart put in to make the show edgy and compelling.

“I actually wanted to do another action, jump-kick movie,” Snipes surmises. “But whenever I have the opportunity to do drama, I want to go in there and one hundred percent give my all. You can’t pimp drama or theater. I approach it like it might be my last shot, and I take it extremely seriously. It was a great juxtaposition to something like General Izzi in Coming 2 America, and it gives me a chance to show the new generation a wide range of my abilities and creativity.”

Are you excited about seeing Kevin Hart and Wesley Snipes play against type in True Story? Drop your thoughts in the comments.