This week on The Flash, Barry shrugged off talk that his mind would “crack” — until it began to do just that.

Picking up, almost jarringly so, right where Part 1 left off, Despero was whaling on Barry — not to vanquish the future threat just yet, but to assess what it will take once the time comes. Barry asks how it could be that someone who has saved his city so many times could ever unleash Armageddon, and Despero explains that Barry will suffer “a new despair” that caps an “unbroken chain of sorrow,” and as a result his “mind will crack.”

Later, Iris tries to soothe Barry’s new concerns by talking of the very uneventful day she has planned — including a visit with Cecile and Jenna, who have been “having a pretty hard time lately.”

And that stray comment, paired with Cecile’s peculiar reaction to Chester last week quipping that Ray was “dead to him,” marks the second clue that perhaps we (and Barry) have been missing something.

The next such clue comes when at a crime scene, Kristin Kramer orders Barry to stand down because he is being investigated for possible federal crimes (i.e. helping out Joseph Carver). “If Joe were here right now…,” she says ahead of a pep talk, drawing more attention to his Season 8 absence thus far. When Barry drops in on Cecile for legal advice, he detects that she is a bit on edge. “It’s just been hard lately…,” she starts to say, until Despero interrupts.

Having already lost his job, Barry next learns that the feds are on site shutting down STAR Labs, due to an undetected imminent radiation overload (or something). Realizing that assorted failsafes fritzed out, Chester confirms same, and the feds order an evacuation so that they can seal off and eventually destroy the building — but not before Barry has Gideon block off Team Flash areas with holograms, and Chester and Allegra grab as much tech as they can. 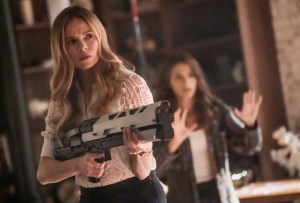 With everyone regrouping at Caitlin’s, Barry tasks Iris and the Citizen with getting a lead on “Zotar,” the name a bank guard kept repeating after losing his mind earlier. Led to the site of a jewelry heist, The Flash confronts the psychic metahuman and charges at her… only to wind up tumbling into Caitlin’s place, where a BFG-toting Caitlin, Chester and Allegra are all horrified, and insist that Barry just attacked them/barely missed Chester with a lightning blast. Caitlin runs some diagnostics, though, and Barry seems fine….

While Caitlin helps Frost set up an ersatz med bay at their place and Chester and Allegra set up shop in Chester’s garage, Barry confronts Despero, asking why the alien cares so much about Earth’s alleged Armageddon. Despero explains that his home planet, Kalanor, was overrun by an evil despot. And though he led a successful rebellion, when it came time to “cut the head off the snake” of their oppressors, he misguidedly showed mercy — and was spared but banished to Earth as his punishment. Barry notes that he has endured crises before, so whatever is coming, “I can handle it.”

Using old-school tech, Team Flash gets a lead on Zotar in the midst of an art heist, and this time she surprises The Flash with her telekinesis, raising him into the air and bending his body like a spoon. Determined to throw some lightning athis foe but unable to run, Barry vibrates his cells on a molecular level, generating a surge in electricity that ultimately releases itself as a pulse that KO’s Zotar and shatters some car windows.

Coming off of that win, Barry suggests to the famished team that they go hang at Joe and Cecile’s and see if Joe might bust out the family jambalaya recipe. And he is met by looks, and “That was not funny” observations. “Joe died six months ago,” Caitlin reminds him. Completely puzzled and a bit horrified, Barry speeds over to the West home, frightening Iris with his superspeed search for Joe. “Where is he? WHERE IS HE?!” he demands to know, before spotting a memorial plaque on the mantel, alongside a ceremonial folded flag. Iris reminds her husband, “You gave the eulogy at his funeral,” while Cecile enters to find Barry denying the tragic truth. “Dammit, Barry! Joe is gone, why can’t you just accept that?” she wails, recounting her already-difficult effort to “move on.”

The tense moment is cut short by a breaking news report on Iris’ phone and then the TV, in which the anchor tees up video of The Flash hurling bolts willy-nilly at bystanders after besting Zotar. Though there were no civilian deaths, “the hero who has saved our city countless times has turned against us,” the anchor reports. As with attacking Chester at Caitlin’s, Barry has no memory of this outburst, while Iris notes that Zotar had been metacuffed by then, so she is not to blame. Despero then materializes and zaps Barry with his third eye, relishing the opportunity to fittingly end the threat of Armageddon using “the fire of my homeworld, the Flame of Py’tar.” But just as he unleashes this finishing move, Chester and Allegra breach in to deflect the flame with a homemade gizmo, allowing Barry to escape. 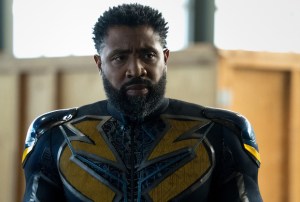 While the rest of Team Flash check in with Supergirl‘s Alex Danvers, who had heard apocryphal tales about the Flame of Py’tar (an energy source at the heart of Kalanor), this marks the first time anyone has met an actual Kalanorian. Alas, both Kara and J’onn J’onzz are “off world” at the moment and unable to help assess this alien threat.

Barry meanwhile speeds to the Hall of Justice for an impromptu meeting with Black Lightning aka Jefferson Pierce.

“Barry, what the hell is going on?” asks Jefferson.

What did you think of “Armageddon” Part 2? Do you think Joe is really dead? And by “injustice,” was Barry referring to the sort of “alternate reality” storyline from DC comics? (Or simply the opposite of justice?)