Hawkeye‘s eponymous hero will go from Avenger to reluctant mentor in the upcoming six-part series, which arrives with a double-episode premiere this Wednesday on Disney+.

Set about two years after Avengers: Endgame, the series centers on Clint Barton, who visits New York City and is determined to make it back to his family in time for Christmas. That may prove difficult when his checkered past comes back to haunt him, leading the Marvel hero to team up with his biggest fan: Kate Bishop.

For Rhys Thomas, who directed the first two episodes, Christmastime was the ample setting to explore Clint’s dark past.

“Christmas is sort of this heightened time of year where everybody’s supposed to be happy, and everything’s supposed to be great,” Thomas tells TVLine. “Clint, of course, is trying to deliver that for his kids. Fans know coming into this is that his past isn’t so clean. So how does a man deal with that? You get to use that joyous time of year and that tension to let things escalate and let his past catch up.” 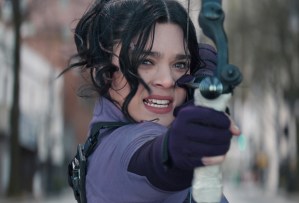 Still grieving this loss of his friend Natasha, who sacrificed herself in Avengers: Endgame so that Clint could retrieve the Soul Stone, Clint will grapple with survivor’s guilt in the coming episodes. He’ll also be forced to deal with familiar enemies, like the Tracksuit Mafia, from his checkered past as the rogue assassin Ronin. As you’ll recall, Clint took up the moniker and went on a murder spree for five years following Thanos’ finger snap in Avengers: Infinity War, which wiped half the galaxy out of existence, including Clint’s wife and kids. They, and the rest of the Blipped, reappeared in Endgame.

“It’s very exciting,” Jeremy Renner, who plays Clint, aka Hawkeye, says of the Disney+ series. “It could be cathartic for [fans] as well as it would be for Clint.”

The series is a fun Christmas adventure that digs deep, as we’ll see in scenes like the Steve Rogers musical, which, according to Renner, “would seem funny [but] can turn into something quite dark and real for a minute.”

The upcoming Marvel show also puts Kate Bishop, a skilled archer in her own right, face-to-face with her hero. Acting as the audience insert, it’s through her eyes that we see what it would be like to meet one’s favorite Avenger. “She is just like me and you,” executive producer Trinh Tran explains. “She experienced a moment in time that pushes her forward to wanting to learn archery and be good at that skill set.”

Hawkeye: A Quick Recap of the Master Archer's MCU Backstory 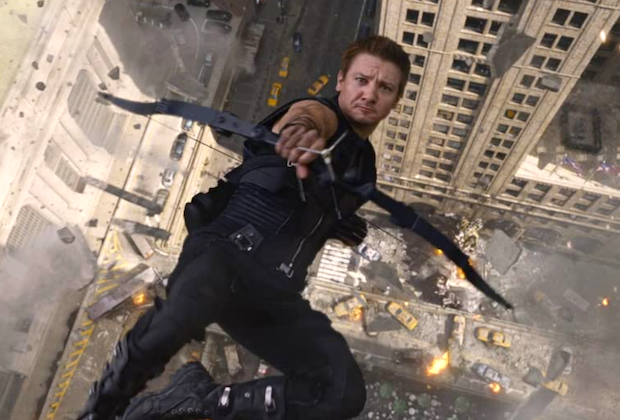 Much of the story for Hawkeye was inspired by the 2012 comic of the same name, written by Matt Fraction and featuring art by David Aja. “We wanted to draw a little bit of how Kate is like in the comics: the energy level, smart, impulsive, stubborn, sometimes annoying to Clint. That’s what’s fun about it… He is a little bit more of the reluctant hero, and she’s the one that wants to be a hero,” Tran adds.

Kate’s confidence in her archery and combat skills as well as her bright-eyed enthusiasm about diving into the superhero world is as refreshing as it is a potential hindrance for the hero-in-training.

“She has this overconfidence that may or may not backfire at times,” Hailee Steinfeld says of Clint’s would-be protégé. “One thing I love about this character is that she gets knocked down, but she gets back up again, and nothing can really stop her.” 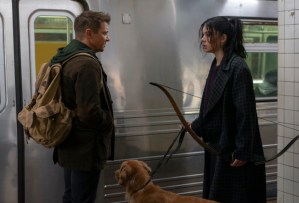 Once Kate gets past the fact that she’s working alongside the Hawkeye, she “becomes more serious about what’s going on around them,” per Steinfeld. And there is plenty going on, including the presumed arrival of Yelena Belova (played by Florence Pugh), who, as we saw during a post credits scene in Black Widow, was told that Hawkeye is the one responsible for Natasha’s death. The fan-favorite character is set to appear in Hawkeye, presumably to avenge her adoptive sister.

“I think any keen observer knows that perhaps her information isn’t as clean as she would think,” Thomas teases. “Again, the show is Clint very much confronting his past whilst also having this future in his hands next to him [in Kate Bishop], jostling to understand what it means to be Hawkeye.”

Better Call Saul alum Tony Dalton is also set to appear as Jack Duquesne. Though he couldn’t say much about Jack’s role in this series, he did confirm Jack’s status as the famed comic villain: “I do play the Swordsman.”

Vera Farmiga also stars as Kate’s mother Eleanor, who, in Marvel lore, is more deeply involved in the superhero world than she lets on. Farmiga describes Eleanor’s relationship with Kate in the series as complicated, especially with Kate so determined to be a hero. “It’s always tough, mothers and daughters aligning in terms of the vision that mothers have for their daughters,” she says. “That might not always align with the daughter’s vision for herself, so it’s really delicate and intricate and complex.”

As Clint and Kate embark on an unexpected holiday adventure, Thomas notes that fans can expect some surprises along the way. “It’s Marvel,” he concludes. “I would expect twists and turns and entrances and exits. They’d like to keep you guessing.”