Warning: This post contains spoilers for The Great Season 2.

The Great’s metaphorical chess match between Catherine and Peter in the Season 2 finale is predicated on a lie: Peter slept with Catherine’s mother Joanna and intentionally killed her because that’s the sort of thing he would do.

While the Russian emperor has murdered for pleasure in the past, we saw in Episode 8 that Joanna’s death was, to put it boldly, a “f–king and falling out of a window” accident. Showrunner Tony McNamara says writers brainstormed numerous ways for Joanna to die, including auto asphyxiation, before landing on her surprising tumble from the top floor.

“We were trying to find a way to have her die — because we knew she had to die — and make it sort of Peter’s fault but not really,” McNamara tells TVLine. “How can it be [that] he’s sort of complicit in it, but he didn’t actually kill her? There were a lot of ideas about how she dies, but in the end, going out the window seemed funny and kind of good.” 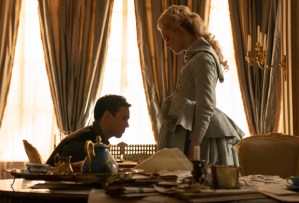 Peter is immediately blamed for Joanna’s death, and for the first time we see him wrestle with feelings of guilt for his role in the incident.

“He knows it’s going to be painful for Catherine and it was a bad idea. It’s part of this season’s struggle for him with who he is as a person, and whether he can be a better person,” McNamara explains. “It’s one of the moments in the season where he’s like, ‘Oh, maybe I can’t,’ and that’s something he has to grapple with.”

Peter’s role in Joanna’s death shattered any hopes Catherine had about him changing for the better, propelling her forward with the plan to kill him once and for all. In the season’s final scene, she stabbed a decoy thinking it’s Peter, and immediately broke down over her husband’s presumed death. It was a moment of realization for the empress who, despite her negative feelings toward Peter, still loved him on some level.

“She knows she loves him before that happens, but I think once she kills him, she realizes essentially she doesn’t want him dead,” McNamara notes. “She’s suddenly in this [mindset of], ‘I don’t want him dead, but I did just try to kill him and now we’re stuck together. And I don’t know how we’re going to be, because he f–ked and killed my mother,and I just tried to kill him. And now, somehow, we’re going to try to be together?’”

The Hulu comedy hasn’t yet been renewed for Season 3, but McNamara has already begun thinking about the next season — including what married life is like for Marial and her child-groom (“Certainly, we’ll see a lot of [Muriel’s] new married life”) and how Peter and Catherine try to co-parent after plotting each other’s murder. The pair bonded in Season 2 over the impending arrival of their son — Catherine softened towards him because of his enthusiasm about becoming a dad — but parenting said child is a different beast entirely.

“Once they’re actually in the process of trying to bring up a kid, and their values are so different and the way they view the world is so different, it’s probably going to be a nightmare,” McNamara adds.