It’s all about the smile for actor Manuel Uriza.

As dirty politician Carlos “Mr. Hank” Gonzalez on Netflix’s Narcos: Mexico, for instance, his grin is menacing and mercurial. But as loving father Ernesto on the streamer’s dramatic familial comedy Gentefied, he beams with warmth and sincerity.

Uriza says small countenance shifts such as these help him bring humanity and believability to his portrayals.

“Ernesto is more like me,” Uriza tells TVLine with a chuckle. “If I were more like Mr. Hank, I’d be in prison. But it’s exciting to play two totally different characters on two very different Netflix shows. Gentefied came at a time when we were in between shooting Narcos: Mexico, because the pandemic got in the middle and there were a lot of stops. When we had Christmas break, I came back home, and in January, I auditioned for Gentefied.”

Being on both shows allowed Uriza to work with actor Joaquin Cosio twice. Cosio has played Don Neto on Narcos: Mexico since it began and costars as patriarch Pop on Gentefied. Uriza plays his son on Gentefied, but their characters don’t interact on the third and final season of the cocaine-centered saga Narcos: Mexico. 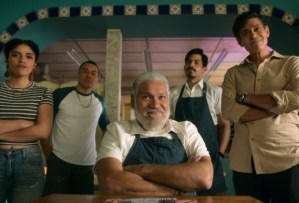 “It was a happy accident,” Uriza reveals. “I had no idea I would get to work with Joaquin twice because we don’t share any scenes on Narcos: Mexico, which came first. But it was fun because I actually met Joaquin on Gentefied. We would shoot ideas and thoughts back and forth on how we felt about both shows and the perspectives they give. It was such an exciting dynamic when we got to talk about our experiences in this business. I loved picking his brain.”

The conversation continued when shooting wrapped on Gentefied and Uriza and Cosio jumped on a plane to Mexico to finish their other series.

“It was such a blessing to have those chances,” Uriza shares. “Now Joaquin and I are friends.” 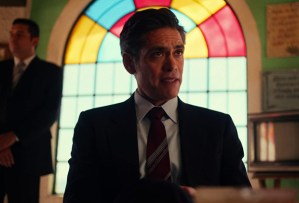 Working on Narcos: Mexico also allowed Uriza to reflect on the time he met Mr. Hank as a child and try to work that feeling into his performance, he says.

“I met Carlos Hank when I was 10 years old,” Uriza recalls. “I met him at the race track in Del Mar because my grandfather was a racehorse trainer. He came up from Tijuana and talked about a horse he wanted trained. The memory I have was of him being like a fun uncle. He was sitting there, discussing business, but he’d stop every now and then and nudge me about eating my ice cream sundae.”

This is a drastically different perception than the corrupt figurehead who trafficked in backdoor partnerships with drug dealers and military dictators that Narcos: Mexico spins. This is why Uriza says he had to find the humanity in his version of Mr. Hank.

“That brief encounter I had with him when I was a child,” Uriza says, “is the same impression others had of him when I researched him independently. I tried to find videos and footage to guide me on his traits and mannerisms. Surprisingly enough, there wasn’t a lot to work with, for whatever reason. Instead, I met with someone who was his driver and the sister of one of his maids, and they both described him as a sweet, soft-spoken man who could be playful and had impeccable manners.”

The trick was bringing all of this to his portrayal, Uriza adds, and that included his facial expressions.

“I had to find a way to marry those anecdotes with what was presented in front of me in the script,” he says. “If I had brought my opinions into it, the performance would’ve suffered. The human experience is unchanging, and it comes through everything you’re doing in that moment. So I used his smile and his manners, especially if he was doing or saying something sinister. Shows are made to be watched, not read. And when you throw a little bit of yourself into the character, the result is always going to be something more authentic.”

What did you think of Manuel Uriza’s double duty in Narcos: Mexico and Gentefied? Drop your thoughts in the comments.