Cowboy Bebop went out with guns blazing in a bullet-riddled finale that pitted Spike against his nemesis Vicious — and offered a fun little nod to anime fans, too.

A blood-soaked Vicious offers a toast to himself as the new head of the Syndicate — after he slaughtered everyone else — and he thinks Julia has been plotting against him, too. “There is nothing in this world to believe in. Least of all people,” he sneers as he smashes a wine glass against her face. He wants Fearless’ head on a pike next… and speaking of Spike, he wakes up at Ana’s after narrowly surviving that fight with Mad Pierrot while Jet and Faye search for him at the abandoned carnival. During the search, Faye spots an ad for a retro suburban development called Greenacre Avenue, and it triggers a memory of her childhood home. She scans old home videos to confirm — and now she thinks she knows where she grew up. 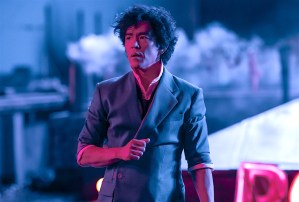 She shares the exciting news with Jet, and he promises to help, but first, they have to find Spike. They track him to Ana’s, and after a brief standoff with her and Gren, Jet gives Spike a huge bear hug. He gets a call, though, and suddenly, he’s holding a gun to Spike’s face. The Syndicate has kidnapped Jet’s daughter Kimmie and will return her in exchange for “Fearless” — a name Jet never knew. Spike admits he used to be a Syndicate hitman, and an enraged Jet stuffs him in his car trunk, happy to hand the liar over to a bunch of murderous thugs. Faye tries to talk Jet out of it, and when he refuses, she lets him go it alone. Uh-oh… our Bebop crew is fracturing fast.

Jet drives up to an empty dock to meet Vicious, who has little Kimmie in tow. Jet freely offers to hand Jet over… but when Vicious’ goons approach his car trunk, Jet gives a signal, and Spike shoots his way out, leaving bodies in his wake. When Jet tries to shoot Vicious, though, the bullet passes straight through him. They realize he’s just a hologram, and so is Kimmie, as more gunmen arrive to take them hostage. Meanwhile, Julia is being driven away by more of Vicious’ henchmen, but she manages to convince one to help her, and they kill the others, flipping the car in the process. The henchman who helped Julia is mortally wounded, but she gives Julia a gun and tells her to “find him.”

When Spike and Jet come to, they’re tied up in a church that Spike calls “the ninth ring of hell.” A smug Vicious greets them and promises Jet he won’t hurt his daughter… he’ll just kill her. He’s still fuming over Spike’s betrayal and points out the spot in his own family crypt he had saved for Spike. Now he wants Spike to watch his friends suffer, and just as gunmen are ready to open fire on Jet and Kimmie — a flash of light shines through the church’s windows, followed by a hail of bullets. It’s Faye to the rescue, mowing down Vicious’ goons in a gunship: “Welcome to the ouch, motherf–kers!” She frees Spike and Jet, too, and as they’re about to board her ship, Spike decides to stay behind: “I’m not finished here.” Faye’s sage advice: “Shoot them before they shoot you, huh?” 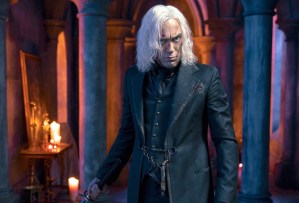 Spike returns to the church, where he guns down a few more baddies before getting ambushed by Vicious wielding a katana. Spike has only a wooden chair leg to defend himself, and they battle back and forth until Spike gets his hands on a gun, and they freeze, locked in a deadly stalemate. Vicious finally stabs Spike through the shoulder, and Spike shoots him through his shoulder, but the gun goes flying, and Vicious uses his katana to flip it to himself. He’s about to fire at Spike when he’s hit by a bullet himself. It’s Julia! Spike is happy to see her, but she wants to know why he never came back to save her from Vicious’ evil grasp. “You are nothing more than a dream I needed to wake up from,” she tells Spike as she shoots him dead in the chest, sending him flying through a stained-glass window and plummeting towards the ground.

Kimmie is back safe in her mother’s arms, and Faye packs up her stuff at the Bebop and heads off to find out where she came from. Vicious wakes up in chains, held captive by Julia, who reminds him he’s an Elder now, so no one’s allowed to see him, and she can speak on his behalf. She puts a single bullet into a gun and spins the chamber, pointing it at his head and pulling the trigger… but it just clicks. (“We’ll try again tomorrow,” she tells him.) Jet and Spike, both nursing bad limps, have an uneasy reunion: “If I ever see you again, I will kill you,” Jet tells his old pal. And later that night, Spike stumbles out of a bar and collapses face-first in the alley… when he’s startled by a manic red-haired kid with goggles named Ed, who shouts, “I have a job for you!” (Yes, this is Radical Ed from the original anime.) She has a big bounty for Spike to collect — if he ever wakes up.

Alright, it’s your turn: Give the Cowboy Bebop finale — and the season as a whole — a grade in our polls, and then hit the comments to share your thoughts.