Warning: This post contains spoilers from the Season 1 finale of BMF.

From the moment Eric Kofi-Abrefa made his debut as the villainous Lamar on Starz’s BMF, he felt the social-media ire from fans of the freshman crime drama.

Week after week, viewers on Twitter would beg and plead for Lamar’s death. And then a fascinating thing happened — Meech killed Lamar in the BMF Season 1 finale Sunday night, and suddenly dozens of admirers tweeted they would miss Lamar and commended the actor’s performance as the best on the series.

“I took all of the hate on social media as a compliment to my performance,” Kofi-Abrefa tells TVLine. “For people to ask, ‘Why is Lamar still here?’ and say they hated me every Sunday, that they wished Lamar would die, I looked at it as all love.”

Kofi-Abrefa says that while he didn’t always understand Lamar’s motivations, he empathized with him. 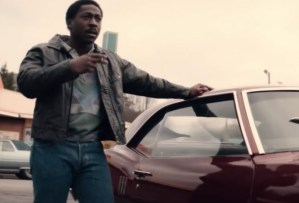 “I didn’t love my character but I liked him,” he says. “I was empathetic towards him and found reasons for the things that he did. I liked his passion and the things that he was passionate about, regardless of if it made sense to other people. When he was invested in something, he was very focused on that. And his love for Zoe, even if she wasn’t his, made him multidimensional. Lamar was more than a killer.”

As for the “posthumous” showering of praise, Kofi-Abrefa shares that he doesn’t act for accolades. He’s just happy he got to show everyone his acting range as a rather complicated small-screen baddie.

“After doing that [performance], I want to move on,” he divulges. “I’ve done it and after doing it, the performance still feels too fresh. But we pray for these sort of opportunities, don’t we? I’m ready for the next opportunity, but nothing has come up just yet.”

What did you think of BMF Season 1? Grade the season and Season 1 finale in our polls and drop your thoughts on Lamar in the comments.