Dexter Morgan may have pulled a fast one on the residents of Iron Lake, but when the cops call in the dogs, it’s probably time to ditch the dead guy.

In Sunday’s episode of Dexter: New Blood, the town remains on the hunt for Matt Caldwell, who we know became Dexter’s first kill after breaking his abstention from murder. But the pressure and the stakes are raised when a bit of found footage reveals a second figure lurking about the scene of the crime. Can Dexter continue weaseling his way out of this one, and where’s he going to stash Matt’s body parts? Let’s find out by recapping “Smoke Signals.”

Dexter’s “one tiny mistake” continues to haunt him. As the search party carries on, he’s balancing his efforts between trying to parent Harrison and concealing the body hidden directly underneath the cops’ feet. And that’s when Angela announces there’s been a break in the case: Reservation land management unearthed footage of Matt shooting down that deer. Of course, the word “footage” immediately sends “Jim” into a panic. Luckily for Dexter, the video is geothermal, so all that can be seen are colorful silhouettes. However, it does reveal a second figure in the woods, which officially turns this missing persons case into a criminal investigation.

Dexter shadows the investigator hired to review the blood at the scene, and he determines some of it is human. He then takes a stab at what he thinks happened, and the guy is right on the money. He even determines there was foul play involved based on the removal of a rock that likely caused a head injury. (“I’ve gotten rusty in my abstinence,” Dexter tells himself.) 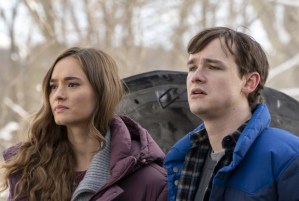 Angela orders a DNA test on Kurt, and confirms that the blood found was indeed Matt’s. She deduces that someone probably saw Matt kill the protected buck on Seneca land, and he or she wasn’t too happy about it. She tells Dex later that she’s ordered search dogs to sweep the woods, so that night, he takes Matt’s clothing and spreads the scent aaaall over the area.

At school, Harrison is accused of cheating on his placement test, but the boy is miffed when Dexter doesn’t immediately back him. Harrison retakes the test and actually scores higher than he did the first time.

Meanwhile, Lily is still petrified in her cage of an apartment. But suddenly, the door unlocks and she bolts down the hall and out of her basement confines. She takes off running, but doesn’t get far: A masked assailant shoots her dead with a sniper rifle.

Dexter still can’t figure out how to dispose of Matt’s body. The ground’s too frozen to bury it, and the lake is too shallow to risk it being found by fishermen. Deb suggests a wood chipper, which gives us a hilarious (and bloody) little scene where Jennifer Carpenter gleefully destroys various body parts, but Dex finds that to be “a little Fargo.” Then he considers the old iron mine. It’s remote, humungous and filled with twisty tunnels, which may be just what he needs. He straps on snow shoes and makes the trek to the mine, where he finds what looks to be the perfect hiding spot… until he awakens a hibernating bear and is forced to flee. 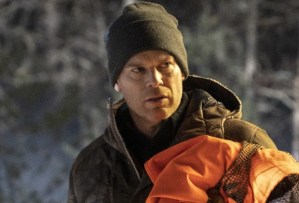 At dinner with Angela, Audrey and Harrison, Dexter tells us he doesn’t want to lose his new “family.” He’s very aware that his impulsive kill almost cost him his small semblance of happiness. After, he apologizes to Harrison for not having his back at school. “I was wrong,” he tells the boy. “From now on, this is me on your side.” Harrison responds: “Thanks Dad,” which Dexter tells us is now his new favorite word.

Ultimately, Dex decides to toss the body into the town’s incinerator, and promises himself he’ll go back to abstaining. “But what if it’s not the killing that got me in trouble?” he wonders. “What if it’s the not killing?”

At the close of the episode, he sees a drunken Kurt on the street who says Matt not only called him, but they Facetimed. We know the mourning father is lying… but why?

Thoughts on Episode 3? Drop ’em in the Comments!