The Mirrorball trophy has been polished, the freestyle routines have been choreographed… and at least one judge has tested positive for COVID-19. Yep, the stage is set for a very unique Dancing With the Stars finale.

But before viewers cast their deciding votes on Monday night, we want your thoughts on who’s likeliest to get a confetti shower at the finale — and who should.

Let’s start with Kloots, who has had an unexpectedly frustrating arc on Season 30. Despite (or perhaps because of?) her dance experience from Broadway and the Radio City Rockettes — a résumé that initially led me to predict Kloots as the Season 30 winner before the cycle began — she’s struggled to win over the judges after even the most technically superb performances. She and pro partner Alan Bersten did eventually receive two perfect scores during the season, but it’s unclear how much Kloots has enchanted the home audience. Plus, Kloots and Bersten have only found themselves in jeopardy of elimination once, but it unfortunately came during the pivotal semifinals broadcast. 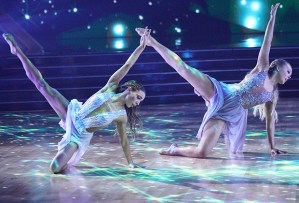 Siwa has had a similarly tough time getting voter support: Some Dancing fans (and TVLine readers) have given Siwa side-eye for coming into Season 30 with a significant dance background, and not all voters have been charmed by her historic partnership with Jenna Johnson — the first time two women have ever competed as a couple on the show. On the other hand, Siwa and Johnson consistently earn the highest scores of the night, which could serve them well during the finale, where they’ll perform twice more before the winner is crowned. And though the pair unexpectedly hit the Bottom Two in Week 7, Siwa’s considerable fanbase has seemed to rally around her since then.

Speaking of finalists with big followings, that certainly describes Rigsby, who is very well-liked by the Peloton and fitness communities. Without that support, I’m not sure he’d have survived those shaky opening weeks of Season 30, which included an admirable performance from quarantine after he and partner Cheryl Burke both contracted COVID-19. As past seasons have proven, a large and passionate fanbase can be more than enough to clinch the big win — and as the only finalist who hasn’t received a perfect score yet, Rigsby could need those votes more than his fellow competitors.

Lastly, there’s Shumpert, who is arguably the weakest technical dancer left in the competition, but has nonetheless charmed voters with his charismatic performance style and endearing lack of dance experience. Like Rigsby, Shumpert has never once found himself in jeopardy of going home, which indicates a lot of “IMAN” texts are getting sent to 21523 every week. Plus, even though Shumpert’s ballroom skills leave much to be desired, partner Daniella Karagach has wisely choreographed routines that instead accentuate the NBA player’s physical strength and likable personality; in other words, he’s still pulling in effusive praise and high scores from the judges. With two more opportunities to wow them on Monday, the Season 30 victory could be Shumpert’s to lose.

But for now, let’s get your thoughts. Which Dancing finalist do you suspect will win on Monday, and who should? Cast your votes in our polls below, then drop a comment to elaborate on your choices!