One of the central appeals of Robert Jordan’s The Wheel of Time is how the late author managed to make his fantasy world feel both huge and small at the same time. It’s a tricky feat Prime Video’s adaptation struggledto pull off during its first two episodes.

But with Episode 3, titled “A Place of Safety,” the showrunners manage to convey that epic yet intimate scope using a technique I honestly didn’t expect to see. The best shows, fantasy or otherwise, know when to expand their horizons and become about something deeper and wider than the original hooks they employ early on to ensnare curious viewers. What lured most of us to this show was a fascination with the book series and a desire to see it brought to life. For newcomers, the draws was perhaps the chance to find the next blockbuster fantasy with all the action and intensity they’ve been missing since a certain HBO series finished its run in 2019.

The violent Trolloc attack on the Two Rivers in Episode 1 was harrowing, sure, and the escape from Shadar Logoth in Episode 2 had plenty of gripping suspense. But Episode 3, while admittedly short on specific set piece moments ripped from the book, finally proves this show can weave its own pattern. (And it might even be better when it dares to go off-book.)

That’s not to say the show has fully departed its source material, especially in spirit. We begin with Nynaeve (Zoë Robins) escaping the clutches of her Trolloc captors in a surprisingly bloody and grotesque scene that puts her own brand of heroism on full display — for those who thought this was a throwaway character back in Episode 1, know that many book fans experienced something similar when first reading The Eye of the World, and it’s nice to see the show working her into the plot far earlier. 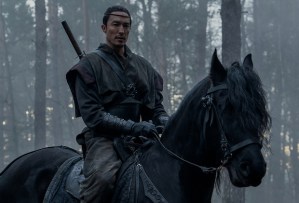 Watching Nynaeve match wits and willpower against Lan (Daniel Henney), who’s similarly been relegated to the background until now, is the first sign in this episode that the writers have figured out, albeit slowly, where this show might shine brightest. That’s when the big questing party gets split up, and we have a chance to let pairs of characters wax philosophical about their troubles and place in the world, including some pointed commentary at how most don’t accept their part in “The Wheel,” a nod to the show’s take on destiny over free will.

Granted, this formula of characters walking and talking between plot points wore itself out quick enough during the middle years of Game of Thrones. But if you have something that works, no need to reinvent the… well, you know.

The show still has its Perrin problem, in that our lovable blacksmith (Marcus Rutherford) continues to suffer in silence over accidentally killing his wife, an invented character and story arc for the show that doesn’t even work on its own, removed as it is from expectations surrounding such an established character. The “fridging” trope, which simply means the death of a character (usually female) in order to shortcut the motivation of a protagonist, has always been just that — a shortcut, and usually a cheap one. 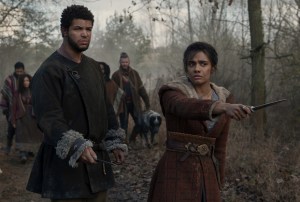 What makes matters worse is that two episodes later, it’s still unclear what good this addition does for someone like Perrin, who already looks down on himself over qualities, like his size and strength, that he has no real control over. So why add in the moral, ethical quandary of killing the woman you love because you thought she was someone about to attack you? The implications of such a tragedy are immense, and any show worth its salt would wisely devote more time and energy to addressing it, at least for the sake of maintaining the character’s likability. For whatever reason, The Wheel of Time treats this entire plot point like one extra flavor to its bleak, bittersweet atmosphere.

Fortunately, the third pairing in “A Place of Safety” is easily the strongest, and it sort of needs to be. The duo of Rand and Mat is a major selling point of the first book, and after the first two episodes, I genuinely worried that Barney Harris’s charisma and effortless charm would overpower Josha Stradowski’s more straight-laced, paragon take on Rand — especially when so much of Rand thus far has revolved around his drama with Egwene (Madeleine Madden), who gets surprisingly little to do in this episode while getting chased by wolves with Perrin. 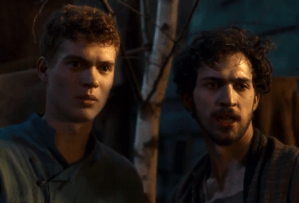 But Stradowski really comes into his own as a functional character here, contrasting Mat’s natural distrust in others with his determined pragmatism. He may not want to be in this inconvenient and dangerous situation, but he’ll do what he needs to and trust the untrustworthy if it means he’ll make it one step further along the journey. And the show wisely adds some new revelations about Rand that finally make him stand out as someone in this ensemble worth following. His worldview gets challenged in a big way when Dana, who turns out to have darker intentions than at first assumed, takes advantage of Rand’s self-importance and puts him against a wall, quite literally. Even though he gets himself out of the problem through some particularly shocking strength (even for readers), it’s hard not to wonder how shaken his mental resolve will be in the series moving forward. Muscle won’t be enough to conquer the battles ahead, and that’s about all Rand has at the moment.

My main issue with the series premiere was how the production design looked a bit too clean and tidy for a fantasy world. I missed the grime and seedy underbelly of the more lived-in settings of Game of Thrones and The Witcher. At the start, The Wheel of Time felt a little too close to the look and feel of The Shannara Chronicles. That feeling changed quickly once Rand and Mat entered the outland tavern with its own smirking barkeep (Izuka Hoyle) and the long-awaited arrival of Thom Merrilin (played by Alexandre Willaume), a shady gleeman who wastes no time stealing the screen from the show’s chosen one wannabes.

The tavern and village surrounding it, aided by simple touches like dirt and sweat slowly creeping the main characters’ faces, lend some much-needed characterization to what’s mostly been a one-note setting. Though it’s the Tinkers who show up during Perrin and Egwene’s section who make the world of this show feel far more alive over the course of a few minutes than almost all of the first two episodes combined.

Prime Video was wise to drop the first three episodes at once, rather than just one or two. That’s because, like with many other shows to be fair, The Wheel of Time has a bit of a slow start, where it’s unclear what the stakes really are for these characters beyond mumbo jumbo about Dragons and Dark Ones. It’s especially surprising to see the show take a far more promising shape in the episode where Moiraine, easily the main draw of the show in terms of leading talent, mostly takes a backseat. That’s not to say Rosamund Pike has been anything less than enchanting to watch thus far, but it says a lot about the future of this series that it still has more tricks up its sleeve.

What do you think of Wheel of Time‘s three-episode kickoff?