Prime Video’s The Wheel of Time debuted on Friday with three episodes to make a first impression. After watching Episode 1, did you decide if you will stick with the already-renewed adaptation?

Let’s start with the undeniable positives. The series premiere, titled “Leavetaking,” is a thoroughly efficient rundown of what this series wants to be and who we should probably care about the most. The opening moments make the stakes clear. There are Aes Sedai, female wizards with extraordinary power, who roam this expansive world in search of dangerous men who can use the “One Power” but lose their minds as a result.

While this is an important task for most Aes Sedai, there’s an even larger threat troubling Moiraine (played by Rosamund Pike). The “Dragon” of legend has been reincarnated into someone who could save the world from the same apocalypse that destroyed it centuries earlier. But if the Dark One and his armies get their hands on this “Dragon Reborn” first, the world just might end at the hands of its own hero. 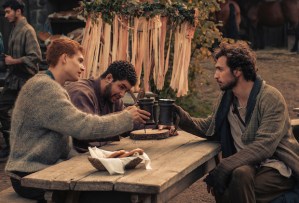 This would be more than enough lore and mythology to bog down any show, but The Wheel of Time is graceful in balancing exposition against its revolving door of introducing primary characters. The Dragon Reborn could be any one of the three 20somethings we meet in the Two Rivers, and there’s a thrill in wondering who it might be. We don’t even have time to really ask that question, however, because by the time the episode ends, this ragtag group is already on the run for their lives.

The casting is fantastic, as these actors certainly embody the spirit and wide-eyed wonder of their book counterparts, despite being aged up (and how the writing sometimes fails them). Mat (Barney Harris) is a particularly fascinating rogue with a heart of gold, though it’s easy to see how his desperation might spell trouble moving forward. Nynaeve (Zoë Robbins) and Egwene (Madeleine Madden) are also easy to love almost immediately. 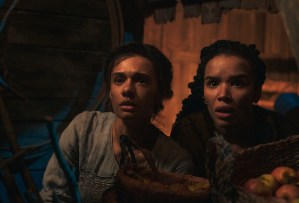 The show fumbles needlessly when it comes to Perrin (Marcus Rutherford), the soft-spoken blacksmith who fears his potential to hurt others. In order to advance this subplot of his guilt and self-doubt, there are painfully outdated storytelling tropes that appear manufactured in order to elicit shock value and cheap drama, rather than set up a journey of meaningful character development.

Josha Stradowski certainly looks the part of Rand, and he sells the stubborn confidence that will hopefully make him more interesting moving forward. But in “Leavetaking,” Rand’s main issues are… angst and girl trouble. It’s relatable, but not exactly enjoyable to suffer through for an entire season, if that’s all we really get from the character.

How do you make The Wheel of Time a fantasy series that pleases fans of the books and newcomers? Well, part of it is by capturing the mystique of the novels. Readers get invested because the World of the Wheel is one of sensory overload. The late author of the series, Robert Jordan, often described people, places, and things several paragraphs more than he arguably needed. It was pedantic at times, but the results were clear. His world had its own rules, quirks and well of escapism, separated from expectations readers might have had when jumping from A Song of Ice and Fire or The Lord of The Rings. 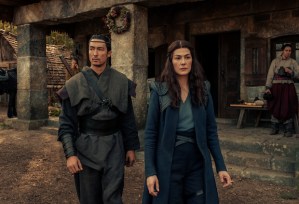 Prime Video’s adaptation needs to establish its own identity as well. Its glossy, clean-cut production design certainly looks expensive — they’re putting the budget to good use when it comes to the special effects, as seen with the trollocs’ brutal, harrowing attack on the village — but the Two Rivers doesn’t exactly feel like a lived-in location. Perhaps because the show has so many other settings on its future checklist, it’s understandable, but this is where our characters call home. They need to yearn for it like the Hobbits crave the Shire, which had a similar amount of screen time before that quest kicked into gear.

Who knows? Maybe The Wheel of Time will have the TV luxury of flashbacks to keep the heart and desire of these characters anchored. Or, they might just be going for something entirely different. Rather than make the Two Rivers a place they (and we) want to return to someday, the point might be that it’s more about the people there — Rand’s father, Mat’s sisters, and so on.

What did you think of The Wheel of Time‘s very first episode? And keep your eyes on TVLine for a recap of premiere day’s Episode 3!