The battle lines are drawn between The Great‘s Catherine and Peter as Season 2 of Hulu’s alt-history comedy gets underway.

Friday’s premiere picks up four months after Catherine’s coup against her emperor husband, and both sides are at a bloody standstill. (“I’m somewhere between bored and enraged,” Catherine complains.) Dead bodies are everywhere — kids are playing with a severed head like it’s a soccer ball — and there’s no sign of Catherine’s lover Leo, though everyone else is sure he’s dead. Oh and she’s still pregnant, by the way. They have Peter trapped on the third floor of the palace, which sounds like a victory… until we see that Peter is happily partying with his friends in his hideout. He’s impressed — and aroused — by Catherine’s progress, but he insists: “She will not beat me because I’m… well, me.” He even has a secret escape tunnel to the outside, but when they send a Peter lookalike to test it out, he’s immediately shot dead. So much for that plan. 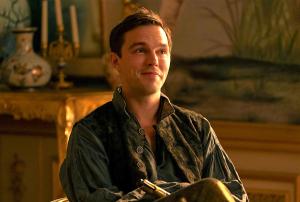 Catherine comes up with a plot to burn Peter and his cronies out with Molotov cocktails, but while an underling does that, Peter has stowed away in a doctor’s cart and pops up in her room. (He casually asks her how she’s been. “At war with you, that’s how I’ve been.”) She’s determined to kill him herself and even lunges at him with a knife, but he fends her off — and he kind of likes her spunk. He kneels at her belly and talks to the baby, who he’s already calling “Paul,” and on his way out, holds a pistol to her chin and warns her, “My patience is wearing thin”… before adding a chipper “Love you!” The Molotov cocktail attack cleared out his loyalists, but Peter manages to escape the palace in a horse-drawn carriage before anyone can stop him, hiding out in one of his country estates.

Catherine is annoyed she missed her chance to kill him — and she’s still annoyed at Marial for betraying her, but the empress and her handmaiden come to an understanding and make up. (It helps that Marial makes great tea.) Peter soon realizes that he forgot to bring his gourmet chef with him and is forced to subsist on a scant few blueberries: “I don’t strategize well when I’m hungry.” Catherine gets a visit from Peter’s Aunt Elizabeth, who puts a frog on her pregnant stomach to prevent a miscarriage. The doctor scoffs at this… but he also wants to do something unpleasant to her with a bundle of sage, so he’s not a lot more scientifically advanced. 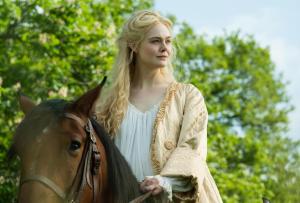 When the palace chef rides off in the night to join Peter, Catherine follows him and finds Peter’s hiding spot. Her soldiers try to storm the place, but it’s no use: Peter’s troops can easily pick them off one by one. Catherine fights back by having the chef cook up delicious food and letting the smells waft over to Peter’s fortress, where he’s stuck eating rats. He finally caves and sends out Georgina to make a deal: He’ll abdicate, but he wants 20 minutes a day with Catherine and the baby. He’ll live in the palace and have fun while he lets her run Russia — and they’ll have lots of “fiery sex.” (“I look at you and go dry, like sand,” she snaps back.) She agrees to palace house arrest for him along with time with her and the baby, but no sex. He agrees and signs the abdication papers before heading straight for the chef’s meal.

Catherine can’t believe it: She officially rules Russia now. But Peter has a gift for her: the severed head of her lover Leo, who is indeed very dead. He hands it to her in a bag as her loyalists cheer for “Empress Catherine the Great, huzzah!” But she looks anything but happy.

Give the Season 2 premiere a grade in our poll, and share your thoughts in the comments.