Fans of CBS’ The Equalizer who have been longing to learn more about Mel are about to get their wish.

A military-trained marksman herself, Mel steps in and fills in the blanks so that no one else will get hurt. Along the way, viewers will learn what happened to Mel when she was active-duty, as well as the sexist detractors she had to leave behind.

“We have such an open line of communication with the writers and executive producers,” Liza Lapira, who plays Mel, tells TVLine. “I asked them why Mel left and Robyn stayed, and they created this amazing backstory that fans of the show will see and hopefully enjoy as much as I did bringing it to life. Until they gave Mel this storyline, I was working with a template I created in my mind to inform my performance. But this is even better than what I initially imagined.”

Without giving too much away, there is an impressive scene in the installment where a leather-clad Mel kicks the bad guy’s butt using sleek martial arts moves and hand-to-hand combat.

“The fight choreography was so much fun,” the Unbelievable and Don’t Trust the B—- in Apartment 23 alum shares. “It was choreographed down to the last inch, and it was like learning a dance. My stunt double was amazing, and she helped me and mirrored the choreography as I did it. The whole thing felt like a dance performance from a Broadway show. I’m so proud that we were able to do that.” 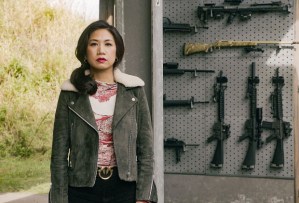 Lapira, who is Filipino American, feels equally honored that her character Mel shares her heritage and that her name, “Bayani,” is authentically Tagalog.

“It means so much to me to have my character be unambiguously Filipino,” Lapira beams. “There is more to Mel than her ethnicity. She’s also ex-military. She’s a New Yorker, and she is a hard-partying bartender. But including all of her background makes Mel a fully realized human being, and that feels good. As the show goes on, my hope is that we’ll learn even more about Mel, where she comes from, and who her family is.”

Until that happens, Equalizer fans will continue to see the madly-in-love Mel and Harry as they help Robyn and each other. Lapira says she feels fortunate to play opposite Adam Goldberg, who plays her hubby Harry and makes the interactions between their characters a joyful experience. 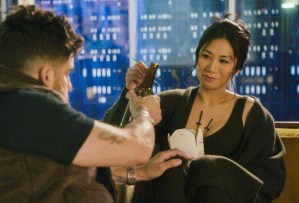 “Adam and I met and hit it off immediately,” Lapira reveals. “He’s such a good guy. I’m so happy that people think we make a good couple. On the surface, Mel and Harry seem like opposites, but they both have a thirst for justice, they have the same level of professionalism and intensity, and they love each other deeply. What’s not to love about that?”

Are you excited to get to know this side of Mel? Drop your thoughts in the comments.