If you go back and watch the Season 10 finale of HBO’s Curb Your Enthusiasm — and Diallo Riddle would prefer that you didn’t — you will see the South Side star and co-creator play his guest-starring role as a firefighter very straight.

Riddle, who has been showered with praise for his recent comical cameo as the Stanford moderator on Insecure, says that guest spots sometimes take off like fireworks, and sometimes … they bomb.

“Being a comedic actor, you can definitely have on days and off days,” Riddle humbly tells TVLine. “I ended up on Curb Your Enthusiasm with my hero Larry David, and I’ve always been a big fan. That character didn’t have a name, but I was determined to go in and kill it.”

But, as fans of Curb Your Enthusiasm know, David doesn’t use a script, “so you have to go in and do your thing,” Riddle explains. “You have to find it in the moment but I couldn’t find it. I swear, Larry and I spent a lot of time looking at each other and nothing. It was just the opposite of my Insecure experience.”

For starters, Riddle expounds, Insecure had a script for its Season 5 opener and it was written by one of the HBO romcom’s executive producers, Amy Aniobi, whom he knows and admires.

“The script was already funny,” Riddle says. “And we were having so much fun in one take, I was able to make Issa [Rae] break character. That was special. It made me very proud as a comedian.” 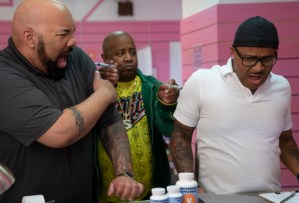 Guest-starring turns aside, the Chicago native has his own HBO Max sitcom to obsess over and finesse. After the COVID pandemic delayed the onetime Comedy Central series for more than a year, South Side has roared back funnier and edgier than ever, with new installments dropping Thursdays through Thanksgiving.

“We wrote a lot of this stuff in January of 2020,” the former Late Night With Jimmy Fallon scribe says, “so you have to understand how happy we are that people can finally see what we were writing. We’ve been sitting on this stuff, waiting to share it with viewers and I’m so happy.”

The source of Riddle’s happiness includes a very whimsical Episode 4 that pays homage to the Windy City classic Ferris Bueller’s Day Off. In Episode 5, a decrepit rent-to-own ottoman has a starring role. And the season opener is all about Simon’s (played by Sultan Salahuddin) obsession with his coveted Omaha Steaks meal kit and the hilarity that ensues. Episode 6, meanwhile, celebrates Cajmere’s Chicago House hit “Coffee Pot (It’s Time for the Percolator)” from the 1990s. 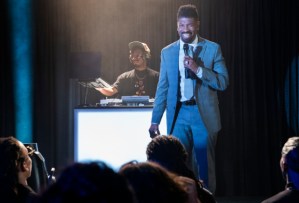 “We were not ready for Chance the Rapper,” Diallo admits. “He did one take that was so long, we had to painstakingly cut it down to one minute.”

What do you think of South Side Season 2 so far and which episode has made you laugh the hardest? Drop your thoughts in the comments.