Salvor took a leap of faith in Foundation’s Season 1 finale and found herself face-to-face with exactly who’d been searching for.

Friday’s season-ender, appropriately titled “The Leap,” saw Salvor learn from a lifelike, holographic version of Hari that her visions were not actually sent by the Vault. She later found out that Gaal and Raych are her biological parents, meaning those visions were the result of her inheriting psychic abilities from Gaal. Armed with this new knowledge, Salvor set out to find Gaal, leaving Terminus and everything she knew behind.

The Empire, meanwhile, appeared to be crumbling right before our eyes. While Dusk called for Dawn’s swift execution, Day considered change as a potentially good thing for them, and both clones came to blows. Before Day could reach a decision on Dawn, Eto Demerzel snapped Dawn’s neck and pledged her allegiance to the Empire. That conflict may have been resolved, but the Cleons will have to deal with another ordeal: rebels contaminated Cleon I’s DNA, as well as the clones’ genetic samples, making it impossible to produce pure clones. This could be the very thing that takes them down. 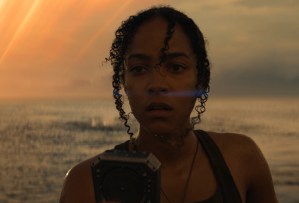 The episode wrapped more than 130 years in the future, with Gaal returning to Synnax, her home planet, which was almost entirely underwater after an ecological disaster. The twist, though, was that she was not alone. Salvor crash-landed there while looking for Gaal years before Gaal pulled her from the pod. The hour ended with Salvor revealing that Gaal is her mother — a moment that will need to be revisited when the show returns for Season 2.

With plenty of questions looming, TVLine hit up Leah Harvey, who plays Salvor, for more intel on that surprising mother-daughter meetup and what to expect next season.

TVLINE | Were you surprised that Salvor and Gaal meet in the finale? How did you feel about that?
I was one of the lucky ones who knew from the very start that Gaal and Salvor were connected and going to cross paths. It was a tricky task to keep the secret from fellow cast members. Most could see a strong connection between myself and Lou Llobell (Gaal) off camera, which might have given it away! We did try our best to keep it on the down low. We spent the whole season helping each other with lines, training together, practically being neighbors when it came to accommodation, and all of this helped create an invisible cord between our characters; one that we were able to explore in that final moment of the season.

Playing a character who spends a season with a burning question and gets an answer in the end is extremely satisfying, so I was very happy to know that Salvor and the audience would experience this.

TVLINE | With the show already renewed for Season 2, where do you think they go from here?
I know where it goes from here because we’ve already started work on Season 2, so I don’t want to spoil it too much! But I will say that these two characters are complete strangers and we will get to dive into how they navigate this new relationship, as well as the world around them bringing new challenges.

TVLINE | What do you think was going through Salvor’s mind when she realized that Gaal had found her?
I definitely think she feels relief and a sense of awe when seeing Gaal. It’s been a long time coming, finally finding the missing piece in her life. The fact that Gaal is even in front of her is astounding. What are the chances that she would land in the exact right place? That Salvor would be discovered and woken up by the very person she is in search of? Though when it comes to Salvor, we cannot forget that she’s an abnormally lucky woman. Salvor is thanking her lucky stars, for sure! 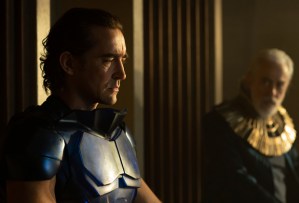 TVLINE | She left everything she knew behind to find Gaal, so how do you think that will affect her moving forward?
I think it might help them connect. They both have traveled years into the future, and for all they know, everything they knew has been left behind. They, potentially, only have each other left. It’s a profound emotion to contemplate, but it is something that requires time to process. Whether or not they have the luxury of time is another question entirely.

TVLINE | Knowing that she’s a century into the future, do you think she’d want to return to Terminus and see what happened to her people?
Being the Warden of Terminus is in Salvor’s blood. Her father, Abbas, was warden-turned-mayor. I think that Salvor always has Terminus and the people of the Foundation on her mind. As demonstrated in Season 1, she’ll go to any lengths to protect these people so I don’t think that will stop just because she’s far away. I do think she would want to discover the fate of the world she once knew and loved. I think we all would.

TVLINE | What have you enjoyed most about playing Salvor this season?
Salvor has many sides, but being a hands-down-badass was, by far, the most thrilling adventure I got to undertake. There’s nothing like staring danger in the face with an unrelenting determination. I’m so grateful that I had a chance to explore that. I also really enjoyed playing a character who is surrounded by so much support. As an actor, there is nothing better than being invested in telling a story alongside your co-stars. The strength we give one another is so powerful. Salvor is truly part of a team, which meant I was part of a team.

TVLINE | What do you hope to explore with Salvor in Season 2?
I’m really looking forward to seeing more sides of Salvor. The first crisis was a survival exercise, and we rarely saw her breathe easy or smile or laugh, which makes sense when you’re trying to save your entire world! I hope to explore her opinions and views on the events around her, her close relationships and how they develop and how she approaches problems with her past experiences guiding her. This is only the beginning of the story! I hope Season 2 presents more opportunities to find nuance and build on what is already a beautiful character to play.

TVLINE | What has this experience meant to you so far?
It’s been a life-changing experience. I’ve learned valuable lessons, had unique experiences traveling the world, and achieved a dream of playing an incredible role in an incredible show.

I have made friends for life and gone through some of the most challenging world events any of us have experienced with an incredible team of people around me. People like Lou Llobell, Cassian Bilton (Dawn), Daniel MacPherson (Hugo)… there are too many to list but all of these incredible people made this whole experience so special. On camera, I worked with industry greats like Clarke Peters (Abbas) and Jared Harris (Hari). I was able to absorb their knowledge for my own development. Our showrunner, David S. Goyer, created an environment which allowed us to thrive and be open with each other. He is a truly wonderful man, and is the reason I was cast in this role, and I will never be able to thank him enough for it.

Want scoop on Foundation Season 2, or for any other show? Email InsideLine@tvline.com and your question may be answered via Matt’s Inside Line.