Batwoman’s trusted doctor (played by Nicole Kang) is set to wreak havoc as Poison Ivy, and TVLine has your first look at the new villainess in action, which you can check out down below.

As we learned in the Nov. 17 episode of the CW drama, Mary was infected by one of Pam Isley’s vines and gained a brand-new, murderous persona in the process. (Remember when Stefan Salvatore flipped his humanity switch in The Vampire Diaries?)

No longer content with her supporting role on the Bat Team, “Poison Ivy Mary uses her newfound powers to stand up, stand out, and express her most deeply buried opinions and desires — regardless of who or what may be in her way,” according to the official description. “But more awaits Mary as her destiny delivers her at the root of her new persona, as she realizes her power bloomed to give life to another… Gotham’s long lost and most infamous botanist. ”

See Mary as the new Poison Ivy below. 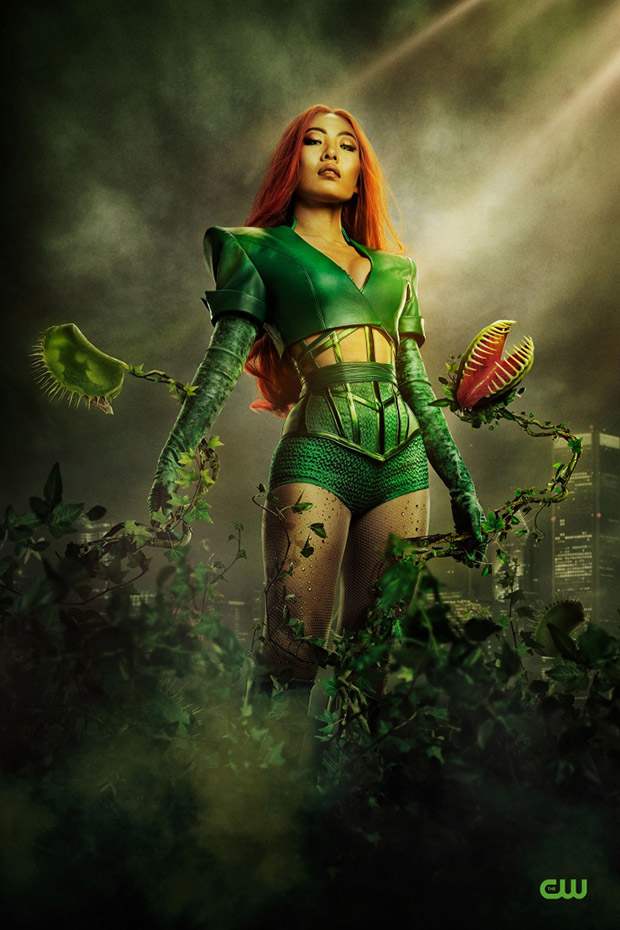 “As we’ve watched the fallout of Batman’s Rogues’ weapons this season, we wanted to make a few of these ‘trophies’ personal to our Bat Team, and Mary felt like the ideal character to go through a major ‘photosynthesis,'” showrunner Caroline Dries said in a statement. “The fun part of making each villain’s powers transferable is that we get to do our own spin on the character — this one through the lens of what Mary would create: something heightened, playful, fashion-forward, and sexy.  It was so exciting to work alongside Nicole as we picked hair color, eye color and, of course, the clothing itself.  But it wasn’t until Nicole showed up on set and absolutely killed her performance that the character of Poison Ivy Mary was complete.”

Nicole Kang, who plays Mary, aka Poison Ivy, said she was excited to bring the new character to life: “I am most proud that Poison Ivy is an Asian villain whose danger does not stem from her foreignness or her mystique. Instead, we discover her personal motivations alongside those of the OG Poison Ivy’s and see them intertwine in an organic and powerful way.  I am so humbled to be a Korean girl in line behind THE Uma Thurman to play the next live action Poison Ivy (what?!). Hopefully the future holds space for others like me and beyond to portray one hell of a character. For everything you’ve let me feel, scream, and become through you, Poison Ivy— thank you.”

Dries previously teased the Poison Ivy twist, telling TVLine that the CW series’ version of the iconic character will be a combination of “staying true to the Poison Ivy canon” and adding their own spin to DC Comics lore. “It’s a major story arc of the season, and we make it really really hard on Batwoman,” Dries said.

Jane the Virgin alum Bridget Regan is also set to appear this season as Isley, the first Poison Ivy.

This Wednesday’s episode, titled “Double Trouble,” will bring the drama as Ryan’s (Javicia Leslie) family dynamic grows more complicated and she finds herself in the middle of a Bat Team stand-off between Luke (Camrus Johnson) and Mary. Meanwhile, Alice (Rachel Skarsten) finds a new sidekick in her stepsister, who is transforming into a supervillain.

How do you like Mary’s new look in Batwoman? Let us know your thoughts in the comment.