“Never the new,” she adds… just time for us to get a peek at The Leftovers’ Carrie Coon as nouveau-riche Bertha Russell, whose efforts to gain entry into fancypants high society are as well-received as a mathlete’s attempt to sit with the mean girls in high school. 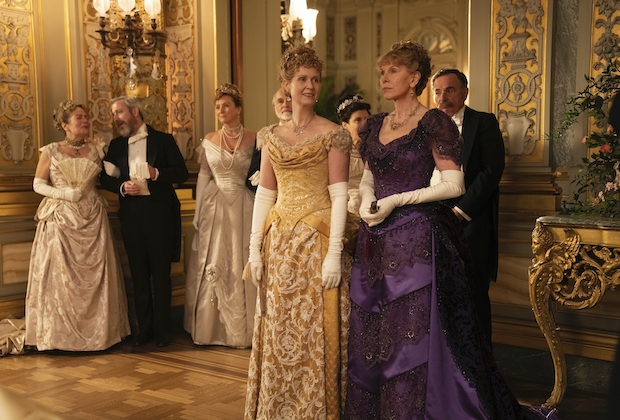 Per the official logline for the series, which also stars Sex and the City’s Cynthia Nixon as Agnes’ sister, Ada, and The Plot Against America’s Morgan Spector as Bertha’s husband, George: “The American Gilded Age was a period of immense economic change, of great conflict between the old ways and brand-new systems, and of huge fortunes made and lost. Against the backdrop of this transformation, [the show] begins in 1882 with young Marian Brook moving from rural Pennsylvania to New York City after the death of her father to live with her thoroughly old-money aunts.

“Accompanied by Peggy Scott (UnREAL alum Denée Benton), an aspiring writer seeking a fresh start, Marian inadvertently becomes enmeshed in a social war,” it continues, “between one of her aunts, a scion of the old-money set, and her stupendously rich neighbors, a ruthless railroad tycoon and his ambitious wife. Exposed to a world on the brink of the modern age, will Marian follow the established rules of society, or forge her own path?”

And how fabulous will her wardrobe be while she’s deciding? Get a hint at the answer to at least that last question in the photo gallery above. Then check out the tense trailer by pressing PLAY on the video at the top of this post.