Burnham and the Star Trek: Discovery crew rushed to help a space station spinning out of control in the Season 4 premiere — and the new captain earned a new adversary in the process.

Burnham and Book open the premiere on a remote planet populated by chalky white butterfly people, offering them dilithium as a gesture of goodwill. Their emperor is suspicious, though, and when Book tells them about Grudge the cat, he gets angry: “Have you come to make pets of us?” They go into attack mode and grow giant butterfly wings, chasing after a fleeing Burnham and Book. The butterfly people’s shots keep missing, though, which gets Burnham thinking. She calls up to Tilly — who asks, “Are you in the middle of a chase?” — and Stamets and Adira figure out that the planet’s magnetic poles have shifted, throwing off the butterfly people’s internal balance. They need dilithium to juice up their compensation generators, and once the Discovery sends it out, their aim corrects. Intergalactic peace restored! 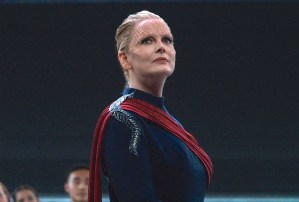 Saru is still on his home planet of Kaminar, urging his fellow Kelpians to open up to other worlds and not be so insular, and Book takes a side trip to his home planet of Kwejian to witness his nephew’s coming-of-age ceremony — which involves Book and his brother mixing their blood with tree sap and giving it to the boy to wear in a necklace. (Um, thanks?…) Meanwhile, Burnham helps announce the reopening of Starfleet Academy and introduces the Federation’s new president Laira Rillak. She wants to embrace the Federation’s tradition of scientific endeavor and shows off a fancy new space dock where Starfleet’s ships will be upgraded. And when the Discovery gets a distress signal from a distant space station, Rillak wants to tag along to see the spore drive in action. (A wary Burnham thinks she’s just trying to pad her résumé.) They jump to the space station… which is spinning wildly through space like a top.

The station commander says they were hit by something, but they don’t know what: “One of my engineers called it a s–t show, which is Earth for bad, I’m told.” Adira and Tilly beam aboard to help, and the place is like an M.C. Escher painting, with people walking on the walls and the ceiling. They get the life support systems back online, but soon, the Discovery is being pummeled by a barrage of methane ice. The shields are wearing thin, the station’s transporters aren’t working and the door to its escape pods is jammed shut. Burnham volunteers to take a small vessel over and fix the door — but Rillak wonders if it’s wise for a captain to leave her ship during a red alert. Burnham bristles at being questioned, but Rillak coolly replies, “A question doesn’t imply questioning, Captain.”

Burnham ventures out anyway (of course), and her tiny ship gets rocked by debris, knocking her senseless and forcing her to fly the rest of the way in just a space suit. The station commander gets impatient and pulls a phaser on Tilly and Adira, but Rillak calmly talks him down and convinces him to wait it out. Burnham fixes the door, and since they can’t all fit in a pod, Tilly, Adira and the commander stay behind while the rest of the station crew takes an escape pod to the Discovery. Back on the bridge, the shields are critically low, and Rillak wonders why Burnham won’t pull out: “So you’re immune to failure?” She defers to Burnham as the Discovery‘s captain, though — and on his home planet, Book notices that the birds are disturbed by something… before something knocks his ship sideways. 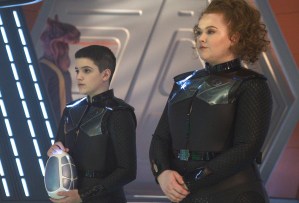 The escape pod returns for Tilly, Adira and the station commander, and they get to the Discovery just as the shields are failing and they’re preparing to spore-jump. They get away safely… but a hunk of debris crashes in with the pod and kills the commander. Burnham is devastated, and Rillak brings up the classic no-win scenario the Kobayashi Maru. It teaches you that you can’t control everything and you can’t do it all yourself — a lesson Burnham still needs to learn, Rillak thinks. Starfleet is working on a ship with a next-generation spore drive, but Rillak doesn’t think Burnham is ready to captain it, likening her leadership style to “a wrecking ball.” Burnham’s reckless actions today could’ve killed everyone onboard, she says — and next time, they might.

Book arrives onboard in a panic: Something struck his ship, and it could be the same gravitational disturbance that hit the space station. They try to locate his home planet, but it’s nowhere to be found. They finally track it to a location far, far away, and when they put it on screen, it looks desolate and ravaged by fire. Book can’t believe what he’s seeing: “They’re gone. They’re all gone.”

Grade the Discovery premiere in our poll, and beam down to the comments to share your thoughts.