It’s still unclear exactly why Karen insisted that Zac tell her their relationship was officially over to her face on Tyler Perry’s Sistas.

But Zac still loves Karen, in some small way, and decided to give his ex-girlfriend the closure she needed on the soapy BET drama Wednesday night. Before Zac met up with Karen, he called Fatima to see how she was doing and Fatima let him know she wasn’t happy with the reunion Karen arranged.

Zac begged Fatima not to be jealous, but Fatima said she just wanted Zac to be more transparent with her and he said he would. Before a visibly annoyed Zac knocked on the door, Danni used the time to remind Karen of all the times Zac cheated on her and Karen said she remembered and didn’t need a refresher.

Karen asked Zac to look her in the eyes and say he didn’t love her. Zac said he couldn’t do that because he will always love her but he can’t be with her. This hurt Karen’s feelings but Zac reiterated that he was being honest and every day that he woke up and didn’t have to look at her face, it got easier for him to leave her alone for good. 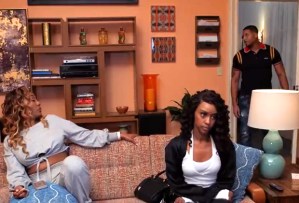 He said she should be with the preacher, and Karen asked if Zac was with Fatima. Zac refused to answer Karen but repeatedly said he didn’t want to be with Karen. Zac and Fatima weren’t out of the woods just yet.

Before Zac arrived at Danni’s to talk to Karen, Fatima pranked that meddlesome and nosy Hayden at work while talking to a friend over the phone as Hayden listened in. Fatima pretended not to like Zac and said that she was “playing him.” She also said she went on one date with Hayden and he started acting crazy.

Fatima further embellished her ruse by saying she only pretends not to like Hayden and she wanted him to wear an orange shirt, jeans and a blazer. Guess we all know what Hayden will be wearing in the next episode. Fashion aside, Hayden recorded Fatima’s fake conversation and played it for Zac over the phone. Uh oh. This could end badly. 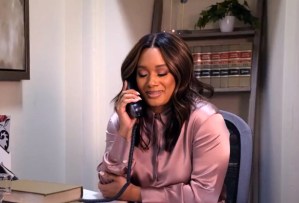 Elsewhere in Atlanta, Gary freaked out when his sex therapist Angela simulated oral sex on him. He stopped her before things went too far, but Angela called it a breakthrough. She said the reason he could no longer get aroused when being intimate with Andi is because he is turned on by the taboo nature of affairs. And when he and Andi officially became a couple, it was less exciting.

While Angela probably has a point, her methods were too outlandish, even by Gary’s crazy-man standards. Suddenly, Gary started asking the necessary questions about Angela’s success rate. (It’s a little late in the game for all that, Gary, don’t you think?)

Angela admitted that none of the couples she “helped” stayed together, and Gary said that he was going to have to let her go. No sooner than he said that, Andi walked in and suspiciously approached them both. Gary said Angela was just leaving, and when Angela said it was good to see Andi again, she coldly said she couldn’t say the same. Burn! 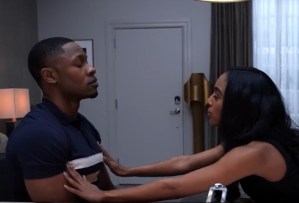 After Angela left, Andi said she didn’t want Angela in her house ever again, and Gary said that was no problem — but Andi didn’t believe him. Andi said Gary doesn’t respect her, because if he did, he wouldn’t have allowed Angela to return. Andi stormed off in a huff, which was mad confusing because that’s her place. Shouldn’t Gary be the one to leave? Even Gary was confused. Ha!

Andi then used her anger with Gary as an excuse to meet Robin for drinks at his hotel. When Robin arrived, he noticed that Andi had started drinking without him and asked if she was working up the nerve to call him. She said yes. Andi also admitted she no longer has a sounding board for her problems with Gary and Robin said he could be objective.

With very little prodding, Andi said things weren’t good between her and Gary but added that she wasn’t ready to go up to Robin’s room. But by the end of the episode, Andi obviously changed her mind because there she was, up in Robin’s hotel room, choosing to have a steamy tryst.

What did you think about Karen and Zac’s reunion on Tyler Perry’s Sistas? And are you glad Andi is sort of moving on with Robin? Drop your thoughts in the comments.