After getting to the root cause of the Burn, a disastrous event that rendered all dilithium in the galaxy useless, Star Trek: Discovery’s eponymous crew can look ahead to the future in Season 4.

The new season, which premieres Thursday on Paramount+, will see Burnham and Co. continue their efforts to rebuild the Federation now that ships can travel at warp speed, and representatives from different worlds like Trill and Ni’Var are expressing interest in rejoining the historic union of planets.

“It’s certainly not a done deal at the end of Season 3, so I think [at] the beginning of Season 4, that work would certainly continue,” showrunner Michelle Paradise tells TVLine, noting that we’ll “find out in the first episode what our heroes have been up to in the time since Season 3.”

Upcoming episodes will find the crew faced with a scientific anomaly that poses a major threat to the galaxy and is also something that they don’t quite understand initially. The Discovery boss notes that show doesn’t directly address the pandemic, but they also couldn’t ignore it in their storytelling.

“When we began writing the season, we were in the midst of it, and I say that acknowledging that we are still in it,” Paradise shares. “We’re taking the spirit of what we were and are feeling as a global family, and then looking through the eyes of our characters and seeing how they would respond to something that is bigger than themselves. In [this] case, it’s a scientific anomaly. We don’t know at the start of the season what it is, where it came from, what is its nature. Our heroes are going to have to figure that one out.”

With the pandemic affecting everyone on a global scale, the writers felt like it was something they should “certainly reflect, at least in terms of the emotions that it brings up in us, and the uncertainty.” 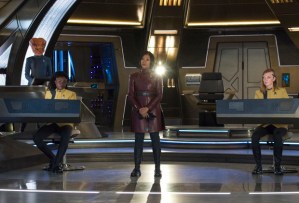 This anomaly is not a pandemic, but they wanted to “create something that would allow us to explore, thematically, those things that we were and are still dealing with: the uncertainty of it, the emotional questions, the questions that come out of, ‘How do we respond to this thing? What happens if this impacts us individually? What happens when this impacts those we love?’ Those larger questions are things that we can explore over the course of the season with this anomaly that’s out there.”

Season 4 will also test Burnham, who finally steps into the captain’s chair full-time. It’s a stark contrast to where we began with her in Season 1 as an officer who had been stripped of her rank and faced life imprisonment for mutiny. Buy after securing a peace treaty that ended the Klingon War (and earned her a Medal of Honor), saving the galaxy from Control and then solving the mystery of the Burn — all while stepping into her own as a leader — her ascension to the chair was inevitable.

“Over the course of the last three seasons, we’ve watched her grow and change quite a bit. When we get to the end of Season 3, we as an audience feel, and certainly the character feels, like there is no one better to sit in that chair,” Paradise says. “She has earned the captaincy. She’s ready for it.”

That said, the captain’s seat is new to her and comes with a set of new challenges. As Burnham steps into this different role, the season will explore questions about who she is as both a captain and leader and how she can navigate different responsibilities.

“Season 4 is our only season that we’ll ever get to see her first time in the captain’s chair,” Paradise adds, “so I think that’s going to be a really wonderful journey, to watch her figure that out for herself and find who she is in that chair.”