From go, the third Psych movie was simply pregnant with possibilities.

Premiering this Thursday on the Peacock streaming service, Psych 3: This Is Gus  finds the titular “Groomzilla” (played by Dulé Hill) and BFF Shawn (James Roday Rodriguez, who also co-wrote the movie) valiantly attempting to track down mom-to-be Selene’s estranged husband, in preparation for a shotgun wedding before the birth of Baby Guster.

Suffice to say, with both a wedding and a newborn looming, Gus and Shawn have more to banter about than ever as they delve into this new mystery.

“The idea of Gus just barreling forward into all of life’s stages, and Shawn going ‘Whoa, whoa, whoa! Hold on! Slow down!’ is really rich,” franchise creator Steve Franks tells TVLine. “It gives you great drama and it gives you amazing comedy opportunities, and we will keep following that muse as long as it’ll go.” 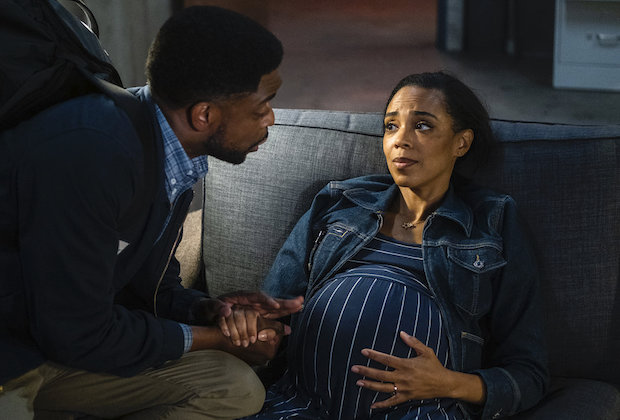 Because Psych 2: Lassie Come Home ended with both the pregnancy reveal and the mutual marriage proposal, the follow-up “just poured out of me,” Franks says, “mostly because I knew I wanted to get to the scene at the end, the birthing scene. It was always about, ‘OK, here’s something that’s going to be 10 to 15 minutes long. It’s going to be the longest scene we’ve ever done, and it’s going to be bonkers.'”

Dulé Hill, who has now played Gus for #8SeasonsAnd3Movies, relished the chance to take his character through these multiple life events.

“The idea of seeing Gus’ journey go further was very interesting to me,” Hill shares. “He has always been a loser in love — it’s never worked out in his favor — so to be able to see him now finally be with somebody who he’s going to be married to and now he has a baby on the way, that excited me.”

Doing another Psych movie, regardless of the plotline, “is always a no-brainer,” Hill says, “because I already know that as soon as we get together, this cast is going to be bomb. I love being on life’s journey with this cast on screen and off.

“I also know that anytime Steve and James get together to write something, it’s going to be something brilliant and ridiculous at the same time,” Hill avows. 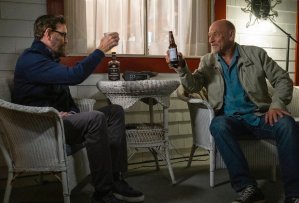 Rodriguez, who has co-written all three Psych movies (as well as 16 episodes of the USA Network series), says it is never not fun to collaborate with Franks.

“Steve always brings so much to the table,” the actor-writer tells TVLine. “It’s not even like a ‘Batman and Robin’ writing partnership. It’s more like Batman and Robin is just Steve, and then I’m, like, Alfred the Butler. I always look forward to what he already has brewing, because there’s always a chunk of things that are always very clear in his head and those become the tent-pole moments of these movies — and then we just get to have a blast filling in the blanks.”

Rodriguez also appreciated having a hand in crafting longtime co-star Timothy Omundson’s largest presence in a Psych project since suffering a stroke in April 2017. “I was very excited about writing for Tim, knowing where he is on his journey of recovery and giving him the opportunity to feel a little more confident, get his swag back, get his groove back.”

Want scoop on Psych 4, or for any TV show? Email InsideLine@tvline.com and your question may be answered via Matt’s Inside Line.